Few films portray working people realistically. One thinks of rare movies such as Hollywood’s Norma Rae, the independent Salt of the Earth, Sergei Eisenstein’s Strike or the Italian classic, The Organizer. 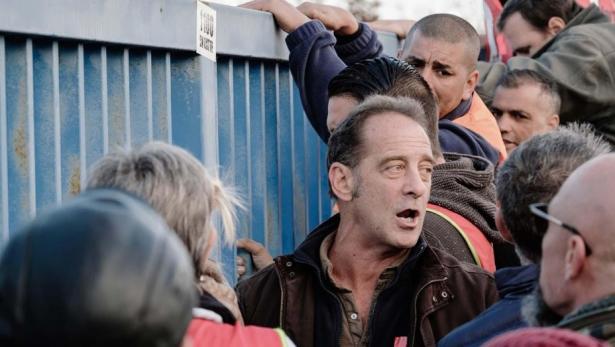 These films portray struggle mixed with joy, no matter the success or failure of the plotline. So the screening of At War, set to debut in New York at Village East Cinema on July 19 and later in Los Angeles, is a welcome event.

The French-language film is a raw-boned, deep dive into modern labor relations that has the feel of an on-the-spot documentary. The plot, foreshadowed by the classic injunction, “Whoever fights can lose; Whoever does not fight has already lost,” is alternately uplifting, sobering and depressing as hell. The aptly named At War is no day at the beach unless the beach is Dunkirk. 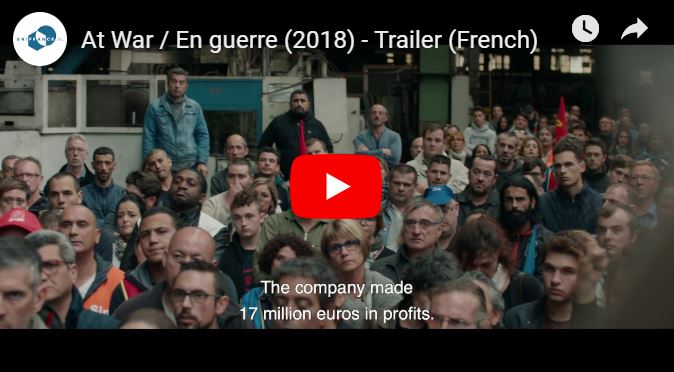 Vincent Lindon, the star of Measure Of A Man, for which he won the Best Actor award at the 2015 Cannes Film Festival, plays Laurent Amedeo, the strike leader of the 1,100 workers at the fictive Perrin Industries-Agen car parts plant in a remote corner of France. These workers are not radicals. What sparks their anger in undertaking a three-month job action is the company’s abrogating of an already burdensome agreement.

In exchange for worker concessions — raising the workweek from 35 to 40 hours with no increase in pay while saving the company tens of millions of Euros in wages — the company pledged to keep the plant operating for five years. Now tearing up the agreement, management charges that the workers are in denial over economic realities, read declining profits. The company wants to boost its bottom line, claiming its 3 percent profit margin is below the industry-wide 7 percent. A boost is needed to assuage investors who don’t think the company is sufficiently profitable. Savings coming from closing the plant in an area with already high unemployment would mean economic disaster for the largely middle-aged workforce. A token company offer of outplacement services and a small severance package is summarily rejected.

There’s no lack of information in the workers’ arsenal. The facts are known. How the company pays huge salaries to top management. How the multinational plans to build a replacement parts plant in Romania where the workers make five times less. How even a buyout spearheaded by the unions from a rival firm that would keep the French plant open is rejected by management because, as they note, “we are not forced by French law to sell,” no matter how attractive the offer. Why indeed create competition for the company? The workers understand the cold-blooded motivation well enough.

What loses the strike is the collapse of worker solidarity. Splits among the workers over the three-months-long job-action outweigh the pressure on capital to settle. A section of the workforce — the workers are segregated into three separate unions and French law doesn’t mandate membership in any union — want to rethink the severance package offer, but an ill-advised physical assault on corporate managers makes even that deal moot. Add to that no left-wing parties intervening to offer even picket line support and no effort made to solicit aid from German unions in the fight against the multinational, so when the splits come among workers, it’s a wonder they didn’t happen sooner.

What the film does well is show the mendacity of management, the pusillanimity of the French government, the class bias of the courts and the inordinate skill of union activists, especially their ability to quantifiably nail the corporation on its rubbishy economic defense of its decision to close the plant. International capital takes a solid beating ideologically from the film at least. All worth establishing.

At its best, At War is like Salt of the Earth as a teaching moment, with its clear, grim view of industrial relations. You forget it’s a staged film and think you are watching actual, contentious negotiations with a recalcitrant management and real-life caucus meetings of unionists. It’s also a revealing dive into international economics and its religious-like faith in boosting stock dividends over the survival needs of employees. Why the company wants to close the productive plant is also eye-opening.

At War also does something Salt of the Earth never quite explains, which is why the latter film’s predatory mining company refused to negotiate with the miners, except for the cryptic remark that “you have to see the big picture.” In At War, we see the big picture; it’s the well-versed workers who live it, understand its parameters and suffer the consequences

The film’s director Stéphane Brizé said he aimed to present “a union representative who deploys no political rhetoric, just the necessity of giving voice to his pain and indignation as well as that of his coworkers.” He pulls it off, if perhaps too well because if the film has a fault, it lies in its dour mood. There are few joyous moments featured, which even for a grueling strike is unrealistic. No celebration occurs during the plant occupation, which is something that would have happened in real life, and did happen in the United States during the industrial sit-down strikes of the 1930s. The film need not be all joie de vivre, but its mordant quality seems paramount.

See the film. If its realism is oppressive, it’s message of how class struggle manifests in real life is true, which is rare enough for modern cinema.

[Reviewer Michael Hirsch is a New York City-based labor and political writer, a Portside culture moderator and editorial board member of New Politics.]

The Indypendent describes itself as “A Free Paper for Free People.” Information on the critical monthly is available HERE.