Half a Century Before Colin Kaepernick, Jackie Robinson Said, ‘I Cannot Stand and Sing the Anthem.’

“The fact that it is a Communist who denounces injustice in the courts, police brutality, and lynching when it happens doesn’t change the truth of his charges." 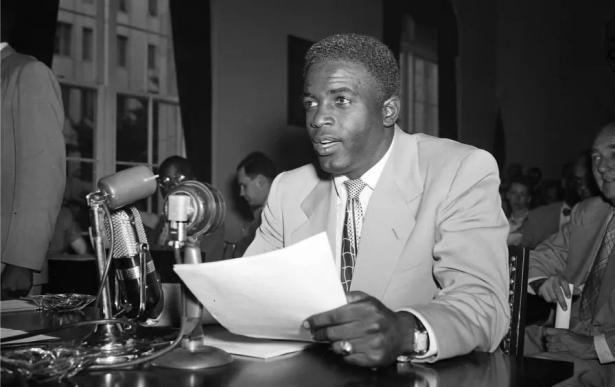 Seventy years ago today—on July 18, 1949—right-wing and segregationist members of Congress orchestrated a confrontation between the two most well-known and admired African Americans in the country: Jackie Robinson and Paul Robeson. The media salivated at the opportunity to portray the clash of these larger-than-life titans as a surrogate for the Cold War between capitalism and communism.

A few weeks earlier, Robinson—who had integrated Major League Baseball when he signed with the Dodgers in 1947—received a telegram from Congressman John Wood (D- GA), an arch segregationist and former Ku Klux Klan member, who chaired the House Un-American Activities Committee (HUAC). He invited Robinson to address a hearing on “Communist infiltration of minority groups.”

Specifically, he wanted Robinson to attack Robeson for being a disloyal American and Communist agitator who didn’t speak for black people.

The pretext for the hearing was a statement that Robeson had made that April at a left-wing conference in Paris. The media ignored Robeson’s main point—that most Americans, including blacks, did not want to go to war with the Soviet Union. Instead, most news outlets used the Associated Press report, which quoted Robeson saying that if a war broke out between the United States and Russia, “It is unthinkable that American Negroes would go to war on behalf of those who have oppressed us for generations against a country which in one generation has raised our people to the full dignity of mankind.”

At the time, Robeson was at the height of his fame. Born in 1898 to a former runaway slave, he had starred in four sports at Rutgers, was twice named to the football All-American team, won Rutgers’ oratory award four years in a row, was elected to Phi Beta Kappa, and was valedictorian of his 1919 graduating class. He played professional football to pay his tuition at Columbia University law school, but gave up practicing law to pursue a theater career. A highly successful film and stage actor, he could also sing opera, show tunes, Negro spirituals, and international songs in 25 languages. His concerts drew huge audiences. His recordings sold well. During World War Two, he entertained troops at the front and sang battle songs on the radio.

Robeson was also a defiant activist. He gave free concerts for left-wing unions and progressive causes. He refused to perform in roles that demeaned African Americans. In 1945 he headed an organization that challenged President Harry Truman to support an anti-lynching law. That year the NAACP awarded Robeson the Spingarn Medal, its highest honor. He was an outspoken critic of European and American imperialism and a strong supporter of nations, in Africa and elsewhere, seeking to unleash themselves from the yoke of colonialism. He embraced the Soviet Union, which he believed had done more than his native country to battle racism and anti-Semitism.

Ironically, Robeson also played a key role in paving the way for Robinson’s breakthrough. In 1943 he led a delegation of prominent African Americans, including the owners of major black newspapers, who met with baseball commissioner Kenesaw Mountain Landis and team owners to demand the sport’s desegregation. “The time has come when you must change your attitude toward Negroes,” Robeson told them. “Because baseball is a national game, it is up to baseball to see that discrimination does not become an American pattern.”

Robinson was also a sports star and activist. Born in 1919, at UCLA he was considered the nation’s best all-around athlete, winning varsity letters in baseball, basketball, football, and track. He briefly played professional football before joining the military in World War II. In 1944, as a 25-year-old army lieutenant at Fort Hood, Texas, Robinson was court-martialed for refusing a bus driver’s order to move to the back of the vehicle. Arrested on bogus charges and put on trial, he was found not guilty, and honorably discharged.

After briefly playing baseball in the Negro Leagues, Robinson signed a contract with the Brooklyn Dodgers in 1945 and two years later broke Major League Baseball’s longstanding color barrier. In his first season, he led the Dodgers to the National League pennant and was voted the Rookie of the Year. By 1949—his best year, when he eventually won the Most Valuable Player award—he was a celebrated national hero. His success on the baseball diamond, and the dignity with which he handled his encounters with racism on and off the field, stirred the consciences of many white Americans and gave black Americans a tremendous boost of pride.

Robinson was reluctant to testify against Robeson. He didn’t agree with Robeson’s Communist views, but he admired his lifetime of activism.

“I didn’t want to fall prey to the white man’s game and allow myself to be pitted against another black man,” he later wrote. “I knew that Robeson was striking out against racial inequality in the way that seemed best to him.”

Branch Rickey, the Dodgers owner who had recruited Robinson, was a fervent anti-Communist and reminded him that if he refused to testify, HUAC might subpoena him anyway. Robinson also felt a “sense of responsibility” to convey black Americans’ loyalty.

So on the morning of July 18, Robinson and his wife Rachel flew to Washington, DC, a city where first-class hotels were still racially segregated. On this occasion, HUAC waived its rule against media photographs.

As expected, Robinson criticized Robeson, but it was far from the harsh attack that Wood and his HUAC colleagues were hoping for. Instead, Robinson made an impassioned demand for racial integration and challenged America’s hypocrisy around race relations.

Regarding Robeson’s Paris speech, Robinson said that Robeson “has a right to his personal views, and if he wants to sound silly when he expresses them in public, that is his business and not mine. He’s still a famous ex-athlete and a great singer and actor.”

In contrast to Robinson’s testimony, at the time many Americans—and certainly most HUAC members—believed that Communists did not have the right to express their views or hold jobs. Robinson insisted that blacks were loyal Americans who would “do their best to help their country stay out of war. If unsuccessful, they’d do their best to help their country win the war—against Russia or any other enemy that threatened us.”

“The fact that it is a Communist who denounces injustice in the courts, police brutality, and lynching when it happens doesn’t change the truth of his charges. Just because Communists kick up a big fuss over racial discrimination when it suits their purposes, a lot of people try to pretend that the whole issue is a creation of Communist imagination.”

Robinson’s appearance was a major news story, but the press focused on his criticism of Robeson and virtually ignored his condemnation of racism. It was part of a wider campaign to isolate Robeson, who was denounced by the media, politicians, and conservative and liberal groups alike as being a traitor and Soviet shill. Radio stations banned his recordings. Concert halls and colleges cancelled his performances.

In 1950, the State Department revoked Robeson’s passport so he couldn’t perform abroad, where he was still popular. His annual income plummeted from over $150,000 to less than $3,000. His voice was marginalized during the 1960s civil rights movement. His name and photo were even stricken from the college All-America football teams. He died a lonely and broken man on January 23, 1976, at age 77.

Robinson, who spent his entire 10-year major league career with the Brooklyn Dodgers, leading the team to six pennants and one World Series victory, was elected to the Hall of Fame in 1962.

After he retired from baseball in 1956, no team offered him a position as a coach, manager, or executive. He lent his name to several businesses, including a construction company and a black-owned bank in Harlem, to help address the affordable housing shortage and white banks’ persistent redlining. Both businesses fell on hard times and dimmed Robinson’s confidence in black capitalism as a strategy for racial advancement and integration.

In 1960, Robinson supported liberal Senator Hubert Humphrey (D-MN), a civil rights stalwart, for president. But when Senator John Kennedy won the Democratic nomination, Robinson shocked his fans by endorsing Richard Nixon, who Robinson initially believed had a better understanding of civil rights issues. However, during the campaign—especially after Nixon refused to make an appearance in Harlem—he regretted his choice. He supported Humphrey over Nixon in 1968.

During and after his playing days, Robinson used his public platform—in speeches, interviews, and his weekly newspaper column—to challenge racial injustice. He was a constant presence on civil rights picket lines and at rallies. He worked closely with Martin Luther King Jr. who called him “a sit-inner before sit-ins, a freedom rider before freedom rides.” He was one of the NAACP’s best fundraisers, but resigned from its board in 1967 for its failure to include “young, more progressive voices.”

In 1968 he publicly supported track stars John Carlos and Tommie Smith’s first-raising protest at the Mexico City Olympic Games. In 1970, he was one of two former ballplayers (the other was Hank Greenberg) to testify in federal court in support of Curt Flood’s challenge to baseball’s reserve clause, which kept players in indentured servitude to their teams. Concerned about his activism and influence, the FBI kept a file on Robinson.

At his final public appearance, after throwing the ceremonial first pitch at the 1972 World Series, Robinson criticized Major League Baseball for not hiring black managers and coaches.

In his 1972 autobiography, I Never Had It Made, Robinson observed:

I can’t believe that I have it made while so many of my Black brothers and sisters are hungry, inadequately housed, insufficiently clothed, denied their dignity, live in slums or barely exist on welfare.

Years before Colin Kaepernick was born, Robinson wrote: “I cannot stand and sing the anthem. I cannot salute the flag; I know that I am a black man in a white world.”

He also apologized to Robeson, writing that he would reject HUAC’s invitation “if offered now.”

“I have grown wiser and closer to the painful truths about America’s destructiveness and I do have an increased respect for Paul Robeson, who, over the span of that 20 years sacrificed himself, his career and the wealth and comfort he once enjoyed because, I believe, he was sincerely trying to help his people.”

Robinson died of a heart attack and complications from diabetes at age 53 on October 24, 1972.

Not long after his death, Robinson was almost a forgotten man, but his reputation was revived in 1997, the 50th anniversary of his trailblazing year, with a proliferation of conferences, museum exhibits, plays, and books celebrating his life and legacy. Major League Baseball retired his number—42. The popular 2013 film 42 depicted Robinson’s ordeal during his rookie season, but ignored the protest movement by the Negro press, radical unions, civil rights groups, and Communists—including Robeson’s 1943 meeting with baseball owners—that opened the door for him.

In contrast, Robeson’s reputation hasn’t recovered from its political silencing. Few Americans know about his life and accomplishments.

In 2014, director Steve McQueen—whose 12 Years a Slave won the 2013 Oscar for Best Picture—announced he was working with Harry Belafonte on a biopic about Robeson, but little has been heard about the project since then. Hopefully it will tell the Robeson-Robinson saga as the clash of two fiercely principled men who admired each other and became reluctant symbols of competing approaches to racial justice during the Cold War.

Peter Dreier is the E.P. Clapp Distinguished Professor of Politics at Occidental College. He is the author of The 100 Greatest Americans of the 20th Century: A Social Justice Hall of Fame (Nation Books) and co-editor (with Kate Aronoff and Michael Kazin) of We Own the Future: Democratic Socialism, American Style (forthcoming in 2020 from The New Press).