Andy Stern, the former head of SEIU, is using his resume in organized labor to support a group that explicitly aims to undermine teacher’s unions. 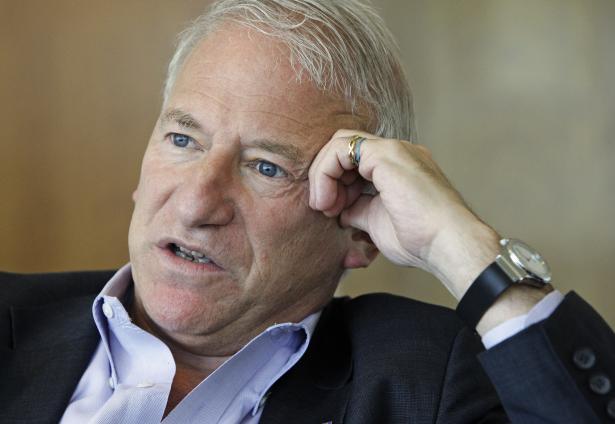 Andy Stern spent 14 years as the head of the SEIU, America’s most politically active labor union. He was perhaps the most visible union leader in America. And what is he doing now? He’s lending his name to a billionaire-funded astroturf group that aims to quash the power of teacher’s unions.

When Stern left the SEIU in 2010, he was a true political power player—his official bio, in fact, brags that “Stern has visited the White House more frequently than any other single person during the Obama Administration.” Under his leadership, his union dramatically grew its membership and helped Barack Obama get elected. But his successes came at a cost. Stern developed a reputation as a business-friendly union leader, known for striking deals with companies that were often seen as too weak by many in the labor movement. Under the guise of modernization and growth, Stern seemed to lose his connection to the grassroots, radical, people-powered aspects of the union world. In 2010, The Nation quoted one union leader as saying, “Andy Stern leaves pretty much without a friend in the labor movement.”

His post-SEIU years have only intensified this feeling. Stern has spent the past decade serving on corporate boards, touting the idea of a universal basic income as an economic solution superior to building labor power, and further ingratiating himself to corporate America as a sort of post-union ambassador to the Aspen Institute world. He also took a seat on the board of the Broad Foundation, a billionaire-funded group that pushed charter schools—raising eyebrows from teacher’s unions, who are often cast as the villain by wealthy reformers seeking to build alternatives to America’s public education system.

In February of this year, Stern wrote an essay for The Daily Beast about charter schools, arguing that they have grown too conservative in their approach to education reform, and advocating a Silicon Valley-style “ecosystem to foster and scale innovation” in education. The essay contained a plug for “Cambiar Education (where I sit on the board),” which “is now incubating over 20 projects and trying to raise a new venture fund.” The piece also included multiple references to his career at SEIU to bolster his credibility. This, in short, is the Andy Stern formula: the prominent touting of organized labor credentials to lend credence to advocacy of an agenda that is decidedly not the agenda of organized labor.

The most prominent and powerful American labor actions of the past year were the teacher’s strikes that swept the nation, from West Virginia to California. Public school teachers have, more than anyone, been the most visible engine of recent union militancy. And as all of that was happening, here is what Andy Stern did: in April of this year, he was announced as an official adviser of the National Parents Union, an education reform group with deep ties to the Walton Foundation, the charitable arm of the family of Walmart heirs, the single richest family in America. (Charter schools are a major focus of the Walton Foundation; the NPU’s board members are affiliated with a variety of groups that have received significant Walton Foundation funding, and its co-leader is an executive at Green Dot Public Schools, a charter group funded in part by the Waltons.)

The National Parents Union—which, in the release containing the news of Stern’s appointment, said that it seeks to “define the education conversation in the 2020 election cycle,” using the language of “empowering families” to erode support for the public education system—is not an actual union. Quite the opposite. It is a classic astroturf-style vessel created for the purpose of giving a political campaign a sheen of grassroots respectability. Its advisers and “Founding Members” are a grab bag of prominent charter school advocates. Andy Stern’s name stands out—his listed title is not from an educational group, but rather, “President Emeritus, SEIU.”

Stern is lending his union-world credibility to a group that says this in its organizing document: “In the same manner that teacher strikes and mobilization are commanding headlines, we have a vision of having parent rallies and mobilizations in the spotlight, redirecting the conversation from one about adults to one about students. The teacher unions currently have no countervailing force. We envision the National Parents Union as being able to take on the unions in the national and regional media, and eventually on the ground in advocacy fights.”

In other words, the former head of one of America’s most politically active unions is using his resume in organized labor to support a group that explicitly aims to undermine teacher’s unions—at a time when teacher’s unions have done more to revive militancy in organized labor than any other group. It is a testament to the contempt in which Andy Stern is already held by much of the labor movement that his involvement in the NPU, which was revealed three months ago, has not yet caused a louder uproar. (It is also a testament to the fact that there seems to be no evidence that the NPU has accomplished anything of note so far.) Stern did not respond to emails seeking comment on his role with the new group. But Randi Weingarten, the head of the American Federation of Teachers, was rather piqued.

“There must be some misunderstanding for a respected labor leader, who spent a good part of his life helping working people, to embrace a Walton-funded group dedicated to attacking them,” she told Splinter via a spokesman. “I urge Andy to take another look at what exactly he’s got himself into.”

The SEIU—still a politically active union, and one which is now having its name used, to fight against teacher’s unions, by a corporate-friendly former president who maintains a higher profile than the union’s current president—did not offer any comment.