Food prep workers want the same benefits other unionized airline workers get, plus a minimum wage of $15 an hour and the right to organize without employer intimidation, interference and lawbreaking. 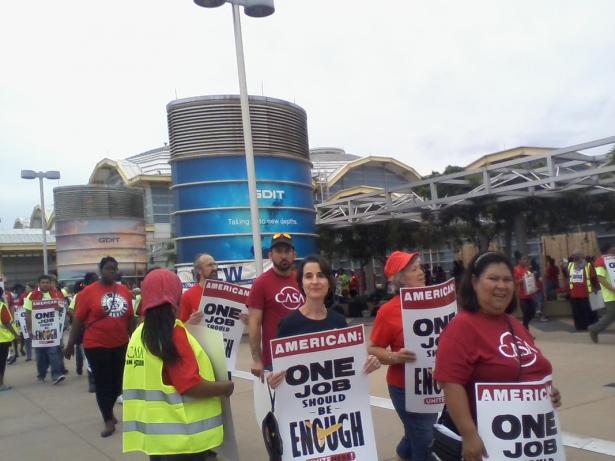 The workers, organized by UNITE HERE, demand union recognition, better wages and benefits and an end to employer interference in their organizing drives at airports nationwide. SkyChef employs 11,000 food prep workers for American Airlines and Delta, while 4,000 more who toil for CafeGourmet, organized with the Teamsters, handle prepared food for a third airline.

“One job should be enough,” was their frequent chant – the same one UNITE HERE hotel workers have used against the Marriott chain.

SkyChef and CafeGourmet together control the workers’ lives, and 80% of U.S. airlines’ food preparation. They also impose rock-bottom pay, no health insurance and no pensions. But the money and the real control rests with the air carriers.

“American Airlines could correct this. That’s the bottom line,” said the Rev. Graylan Hagler, the prominent and outspoken pro-worker D.C. pastor. “They’re the ones who are paying the piper.”

The food prep workers “want the same benefits” other unionized airline workers get, plus a minimum wage of $15 an hour and the right to organize without employer intimidation, interference and lawbreaking, Dallas Skychef 4-year kitchen worker Balin Yakasa said in an interview. He makes $11.65 hourly, but knows 30-year workers there who make only $14.60.

“I spend my life in the kitchen, 12, 13, sometimes 15 hours a day. I’d like to spend more of it with my family.  That’s not right. We need $15 and also retirement income we can survive on,” Yakasa said. “We feed the world, but our kids go hungry,” the Teamsters’ banner said.

Both the UNITE HERE and Teamsters groups have overwhelmingly approved strike authorization votes, but the National Mediation Board – which rules airline and passenger worker-boss relations – has yet to release them to strike, or to release the food firms to lock them out.

“The American people are sick and tired of corporate greed,” Sanders declared. “It’s not acceptable that two-thirds of these workers are making less than $15 an hour and only one-third get company-paid health care. You can’t pay your rent, your health care or buy your food on that. We’re saying, ‘Enough is enough!’”

"When Marriott strikers were on the line and they started using 'One job should be enough,' I thought this captures it, this captures it for the entire economy,” AFL-CIO Secretary-Treasurer Liz Shuler told the group after Sanders spoke. “Because what we are seeing is corporate greed run amuck.”