The right-wing billionaire has teamed up with unlikely ally George Soros on “military restraint,” but Koch Industries subsidiaries make millions by supplying the Navy with circuitry. 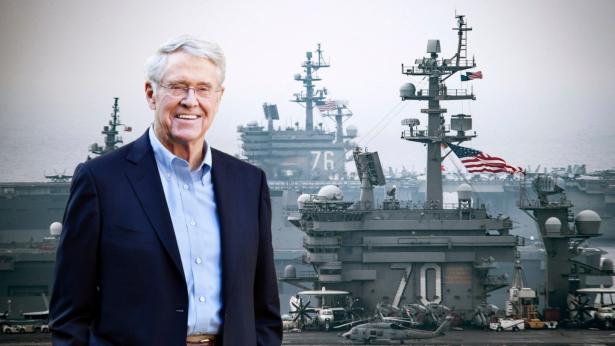 Libertarian billionaire industrialist Charles Koch has gone to great lengths to paint himself as an anti-interventionist. He has funded foreign policy-focused think tanks and university centers such as the conflict-averse Center for the Study of Statesmanship at Catholic University and the Notre Dame International Security Center, which is directed by anti-NATO professor Michael Desch.

“Political leaders have increasingly deployed the military in a costly, counterproductive, and indiscriminate manner, normalizing war and treating armed dominance as an end in itself,” reads the institute’s website. “The Quincy Institute is an action-oriented think tank that will lay the foundation for a new foreign policy centered on diplomatic engagement and military restraint.”

But Koch Industries, the giant oil, chemical, paper, and electronics conglomerate owned and led by Koch, has been cashing in on Department of Defense contracts. Since 2016, two Koch Industries subsidiaries have gotten federal contracts worth a total of close to $2.3 million to provide the Navy with circuit boards for its ships, according to Sludge’s review of federal contract data from the Federal Procurement Data System.

A Navy spokesperson told Sludge that “circuit boards are used in a variety of ships, submarines and aircraft” but declined to provide additional details regarding the use of the Koch subsidiaries’ electronics.

Nallatech, a subsidiary of Interconnect Systems, has gotten close to $247,000 worth of Navy contracts since 2016. The majority of that money came from NSWC Crane, but some came from the NAVSUP Weapons Support Systems agency, which supports naval weapons systems. NSWC Crane gave Nallatech its largest contract, for $147,000 worth of hybrid processors, in September 2017.

Since 2016, Interconnect Systems and its subsidiary, Nallatech, have gotten $2,260,000 worth of Defense contracts.

Koch Industries has consistently chosen corporatism and profit over their own ‘principled’ libertarianism, whether contracting with the U.S. military or accepting over half a billion dollars in local, state, and federal subsidies

Nallatech, which last year integrated with Molex subsidiary BittWare, has received over $617,000 worth of Defense contracts since 2008, the year it was acquired by Interconnect Systems, according to usaspending.gov. The company advertises military and aerospace products such as radar systems for manned and unmanned vehicles that “provide unprecedented situational awareness and target coordination,” as well as a “ballistic digitizer.”

Molex, an Illinois-based manufacturer of electrical connectors, provides parts for a number of industries. In its defense section, the Molex website lists products for use in unmanned vehicles, missiles, and ground vehicles.

Koch Industries, the Quincy Institute, the Charles Koch Foundation, and Open Society Foundations did not respond to requests for comment.

A partially Koch-funded foreign policy center at a California state university is also involved with the Navy.

The University of California at San Diego’s Center for Peace and Security Studies got a $3.3 million multi-year grant from the Charles Koch Foundation in 2017, its second year of existence.

“We’re excited about U.C. San Diego and its scholars’ work to better understand emerging issues in security studies and their implications for U.S. foreign policy,” said Charles Koch Foundation Vice President for Research William Ruger in a university news story. Ruger, an Afghanistan war veteran, is in the Navy Reserve.

The Center for Peace and Security Studies also gets funding from the Office of Naval Research’s Minerva Research Initiative. Its current grant, covering 2014-19, is called “Deterrence with Proxies.”

The center’s website describes its work on military automation. “Technologies that supplant human labor in battle—such as UAVs (drones) and ground combat robots—lower military labor costs and limit political risks associated with friendly casualties. The tendency should thus be for military automation to increase the scope of threats or uses of force by the most advanced economies, geographically and in terms of the issues in dispute.”

UCSD has a long and lucrative relationship with the Navy; the Navy’s Naval Information Warfare Systems Command, which works with the defense industry to create new weapons systems, has been headquartered at the university since 1997. Since 1981, UCSD has raked in nearly $250 million from Navy contracts, according to data from the Federal Procurement Data Service.

‘The Case for Private Defense’

“Charles Koch’s anti-interventionist posturing is more clearly understood through his decades-long support of anarcho-capitalist scholars who have developed and championed the call to privatize police and military defense,” said Ralph Wilson, co-founder of the Corporate Genome Project and former research director of activist group UnKoch My Campus.

Koch’s political views are shaped by the Austrian School of economics, which advocates unfettered free markets and small governments. One prominent right-wing think tank that has promoted these concepts is the Mises Institute, which was established in 1982 and is named after one of the 20th century’s leading Austrian economists, Ludwig von Mises.

The late Murray Rothbard, Mises’ close associate and vice president of academic affairs at the Mises Institute for 13 years, argued against the state entirely and advocated a privatized military and police force. Like Rothbard, Mises Institute senior fellow Hans-Hermann Hoppe supports fully privatized security. In a paper first published by the Mises Institute in 1998, Hoppe argues that “collective security is a myth that provides no justification for the modern state, [and] all security is and must be private.”

In a 2002 essay, republished by the Mises Institute in 2010, Mises Institute fellow Robert Murphy made the case for privatized defense. Since then, he has continued to speak on the issue; Murphy held a session called “The Market for Military Defense” at this month’s “Mises University,” an annual free-market-economics boot camp.

Murphy owes much of his career to the generosity of Koch; he’s a research assistant professor at Texas Tech’s Free Market Institute, which is heavily funded by the Charles Koch Foundation (but also, ironically, gets substantial funding from the state government); a senior economist at the Institute for Energy Research, which Koch helped found and which has received funding from the three Koch family nonprofits; and a research fellow at the Independent Institute, which has scored grants from two Koch foundations.

Rothbard and Koch co-founded the libertarian Cato Institute in 1977 but had a falling out in the early 1980s. Still, their spheres continue to intersect, as several other current Mises Institute associates teach in university programs also funded by the Charles Koch Foundation.

The Koch family has struggled with image problems for some time. Koch, along with his younger brother, David, has helmed a libertarian-minded political operation for decades, which has helped propel conservative Republicans to state and national office, and helped to found the Tea Party. Koch Industries is one of the country’s biggest polluters and has had to pay over $800 million in fines for environmental, labor, workplace, and other violations.

Because of their poor reputations, Koch Industries and Koch’s political network have undergone a series of rebrands, including Koch’s newest incarnation as a philanthropist who works with both parties to reform the criminal justice system and restrain America’s forever wars. For several years now, Koch has compared himself and his network of wealthy conservative donors to civil rights heroes such as Frederick Douglass and Martin Luther King.

But critics say these recent initiatives are largely distractions from Koch’s core mission, which he has always followed: to cut taxes and slash regulations in order to maximize Koch Industries’ profits.

“Koch Industries has consistently chosen corporatism and profit over their own ‘principled’ libertarianism, whether contracting with the U.S. military or accepting over half a billion dollars in local, state, and federal subsidies,” Wilson told Sludge.

Koch will likely continue to fund think tanks focused on preventing wars, but his company’s simultaneous role in the military-industrial complex should not be overlooked.