labor Why the Dems Need to Talk About Economics and Racism

I’m listening for the candidate who makes clear that we cannot protect democracy, create opportunity, or address injustice without addressing all of who we are—as a country, as communities, as workers, and as voters. 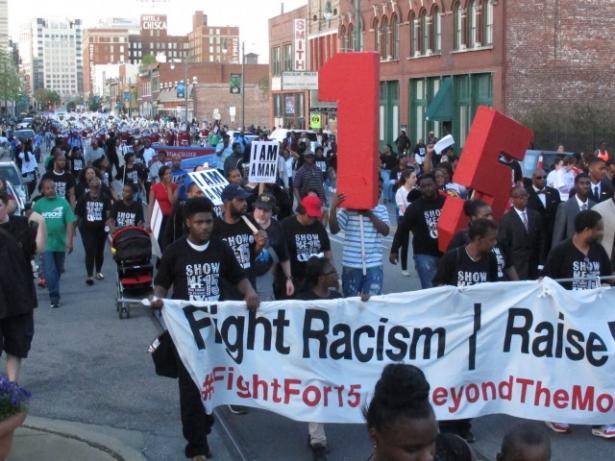 Supporters of the Black Lives Matter and Fight for $15 movements march down the streets of Memphis. , Adrian Sainz/AP Image

In their response to President Trump’s racist tweets telling them to “go back to where they came from,” the four female congressional representatives dubbed “The Squad” tried to shift the debate. Instead of battling over whether the tweets and the subsequent “Send Them Back” chant count as racist, and instead of yet another round of media amazement at the president’s bad behavior, the Squad called for renewed attention to policies aimed at addressing inequality. Too many of their Democratic colleagues, however, including most of those running for president, took Trump’s bait, condemning the president and defending the Squad’s honor as citizens and women of color.

They’d have done better if they had taken up the Squad’s real cause: pursuing policies that address injustice as an intersectional challenge.

The field of candidates for the Democratic nomination is almost twice the size of the senior seminar on working-class literature that I’ll be teaching in the fall. That may seem an odd comparison to make, but if the candidates understood the concept at the heart of my class, they might have recognized that instead of treating race, immigration, and the economy as separate issues, they have to do it all at once. They need to understand, as do voters, that the challenges we face are intersectional.

In “Class at the Intersections,” my students and I will dig into the complex and contested relationships between social class and other categories of culture, identity, and inequality. Intersectional analysis emphasizes that no one is just working-class, or female, or straight, or white. Kimberlé Crenshaw coined the term 30 years ago as part of an argument that black women were not protected by anti-discrimination laws that focused on race or gender. Because the discrimination they faced was intersectional, they needed legal recognition as women of color. In my course, we’ll focus on how working-class people are never defined only by their class. If we want to understand their perspectives, we need to consider how they are also shaped by race, gender, and other social categories.

If the Democratic class of 2020 read Crenshaw’s “Demarginalizing the Intersection of Race and Sex,” they might see that we cannot make progress if we define injustice as rooted in any single category. But that’s exactly what too many politicians and pollsters do, and the media often echo these perspectives in their stories about voters. The problem may start with polling, which sorts people into neat categories, highlighting how black voters or working-class voters or women see particular candidates or issues. But a single voter could be all of those things. Candidates would do well to realize that a black, college-educated, Christian woman isn’t defined by any one part of her identity, nor are her political preferences. There’s a good chance she’s concerned not only about affordable health care but also the racial wealth gap, the high rates of maternal mortality among black women, and debates over abortion rights. This might seem obvious, but the way many of us talk about voters often underpins inaccurate characterizations—like assuming a reference to “working class” means “white working class,” or that most poor people are black.

Just as no candidate can win election by appealing to any single constituency, so candidates can’t win by appealing to voters based on only one aspect of their lives. They must find ways to speak to the multiple affiliations that shape voters’ views. This might mean not just talking about raising the minimum wage but also noting how it could benefit a diverse range of workers, including the women and workers of color who make up a significant portion of lower-wage and service workers. It might mean critiquing mass incarceration not only as a problem of racism in the justice system but also in terms of its economic impacts.

But intersectional politics is never that simple, as another reading from my class reminds us. David Roediger’s historical analysis of how working-class identity has been shaped and enabled by racism presents a very different version of intersectionality and raises particularly challenging questions for both my students and the presidential candidates. Roediger reminds us that while the working class is racially diverse, it also has a troubling historic investment in whiteness. Of course, racism is not remotely the sole responsibility or property of the working class, but it has helped to shape American working-class identity. That’s part of why it’s so hard for politicians (and the rest of us) to address class and race together.

This is an old problem, and as Roediger reminds us—perhaps inadvertently—tensions around class, race, and gender have been shaping presidential politics for years. He notes early in his 1991 book The Wages of Whiteness that analyses of “recent” elections have focused on the working class, especially white working-class men, a pattern that was as common when the book was published as it is today.

Nearly 30 years later, we still assume that politicians and policymakers must choose between race and class. They can emphasize inclusion and discrimination, or they can advocate for “working people,” which, as Roediger notes, “often presumes whiteness (and maleness).” Some pundits argue that Democrats must present a strong economic platform in order to win back working-class voters lost to the Republican party over the last few decades (not only to Trump but going back at least to Nixon). On the other hand, some academics and activists argue that class-based politics have too often left behind people of color and reinforced racism, while others insist that political discourse has largely ignored class divisions among African Americans, presenting “black lives” as if they were all the same. Yet, as Roediger argues in his 2017 book Class, Race, and Marxism, “lamentably vague class talk” and “nebulous talk about racial justice” too often just negate each other.

What we need is political discourse and—even more crucially—political action that fully embrace the interconnections between race and class, without ignoring the difficult history of that relationship. It isn’t enough to acknowledge the challenges of fostering an inclusive society, as Pete Buttigieg advocated in a speech to the Human Rights Campaign in May. While he may be right that “what every gay person has in common with every excluded person of every kind is knowing what it’s like to see a wall,” framing the issue in this way reinforces the idea that gay people are white, male, middle-class citizens. Nor is it sufficient to note, as Representative Tim Ryan did on the PBS Newshour, that the workers whose interests he foregrounds are “white, black, brown, gay, straight.” Such gestures to inclusion don’t challenge the problematic idea that “working class” means “white people.”

I’d love to hear candidates not only address economic and racial injustice but also acknowledge how these two problems feed each other. I want candidates not only to point out that workers are diverse but also to challenge voters to reject any politician and question any commentator who promotes the idea that we need to pay special attention to the concerns of the “white working class.” I’m listening for the candidate who makes clear that we cannot protect democracy, create opportunity, or address injustice without addressing all of who we are—as a country, as communities, as workers, and as voters.

Sherry Linkon is a professor of English at Georgetown University and a faculty affiliate of the Kalmanovitz Initiative for Labor and the Working Poor. Her book, The Half-Life of Deindustrialization: Working-Class Writing about Economic Restructuring, will be published by the University of Michigan Press in 2018. She is the editor of Working-Class Perspectives.