Wealthy, White, and Over 50: The Demographics of the Democratic Presidential Donors 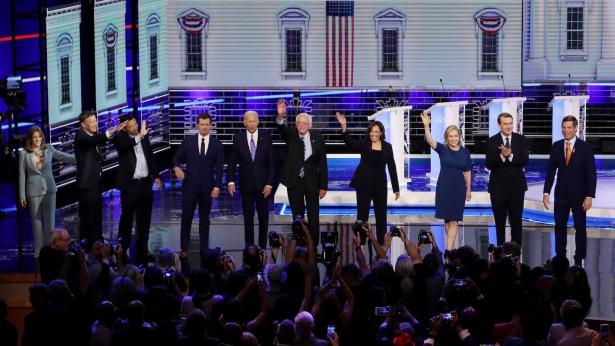 As dozens of Democrats compete to become their party’s nominee for president of the United States, Sludge and Data for Progress have analyzed the individuals who made campaign contributions totaling over $200 to the candidates in the first half of 2019 to create demographic profiles of the candidates’ donor bases. For the 2020 presidential cycle, our analysis is the first comprehensive breakdown of donors by income, race, gender, age, and ideology.

The analysis, which includes the 19 Democrats who qualified for both Democratic debates, uses income, race, gender, age, and political ideology information from third-party voter databases. It covers contributions made from Jan. 1, 2019 to June 30, 2019, and only includes itemized donors, the vast majority of whom gave more than $200 to a 2020 presidential campaign committee.

It is important to note that, in general, the more money an individual donates to political campaigns, the higher the chance that they will be old, white, and male. Since the identities of donors who give $200 or less don’t need to be disclosed to the Federal Election Commission, these data are not fully representative of the candidates’ entire donor pools and should not be interpreted as such. The donor demographics of candidates with larger shares of unitemized donations—donations from individuals whose aggregate amount given to a candidate is $200 or less—would likely change more if the identities of these small donors were available.

For example, 77% of Sen. Bernie Sanders’ fundraising total from individuals was unitemized, compared to only 9% for New York City Mayor Bill de Blasio. Thus, Sanders’ overall donor demographics are likely more diverse than the available data show, and de Blasio’s are likely little different from those in our analysis.

How Wealthy Are the Democrats’ Donors?

Every Democrat got the majority of their support from donors who earn above the mean average personal income in the U.S. of $48,150, but some candidates received a much larger share of their contributions from individuals with high incomes. 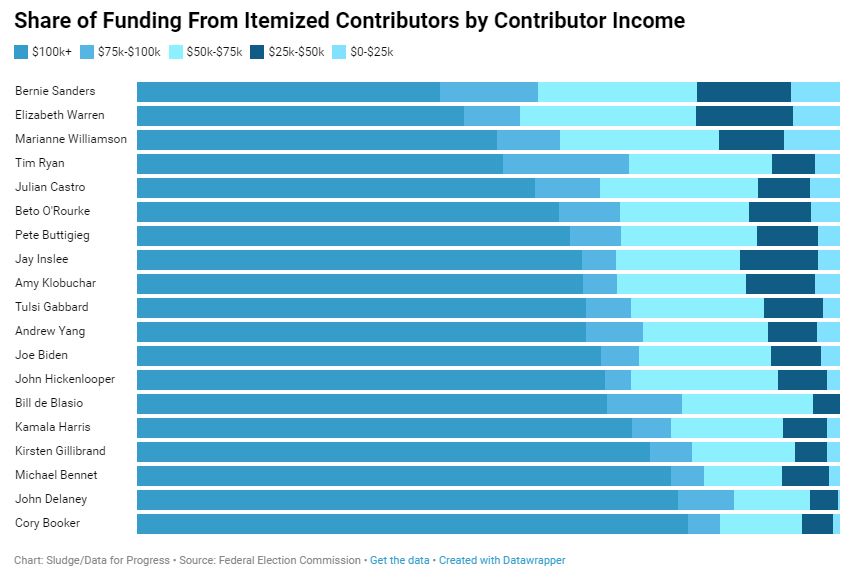 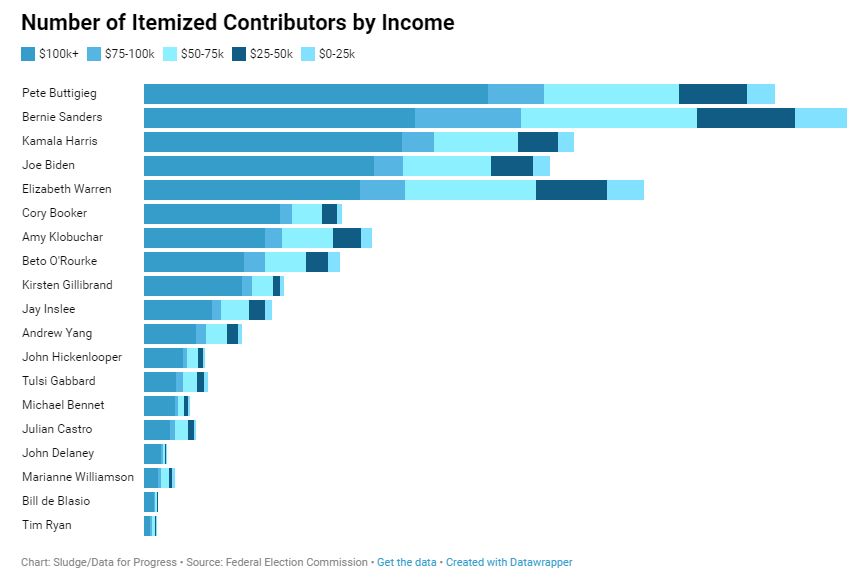 Which Candidates Are Receiving Support From People of Color?

The majority of the candidates received a larger share of their itemized donations from white donors than the national percentage of the U.S. population that is white, according to the most recent census (72%). Tulsi Gabbard, Andrew Yang, and Julian Castro—all people of color—each received less than 72% of their donation totals from white people. The candidate with the highest share of white support was Rep. Tim Ryan (D-Ohio), with 97.8% of his fundraising total coming from white donors, followed by four fellow centrist or moderate candidates (Colorado Sen. Michael Bennet, Minnesota Sen. Amy Klobuchar, Colorado Gov. John Hickenlooper, and former Maryland Rep. John Delaney). 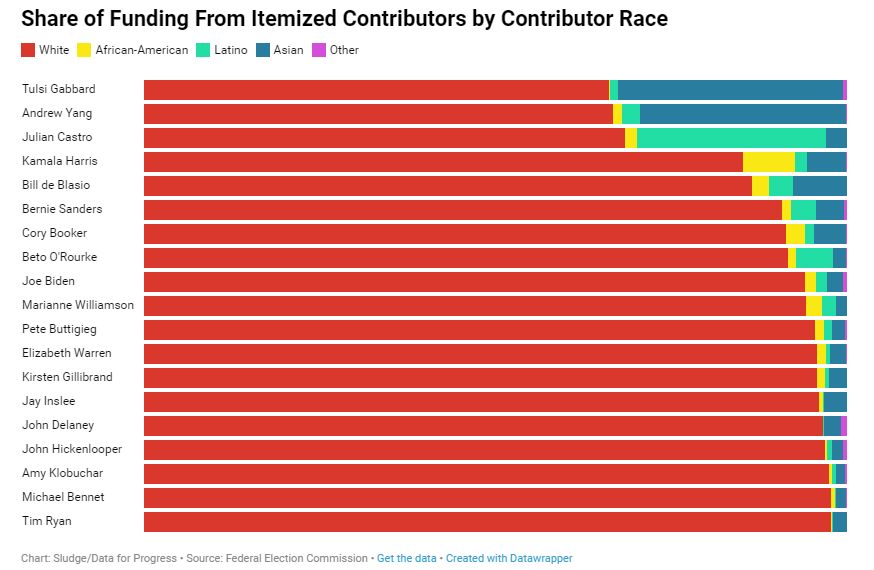 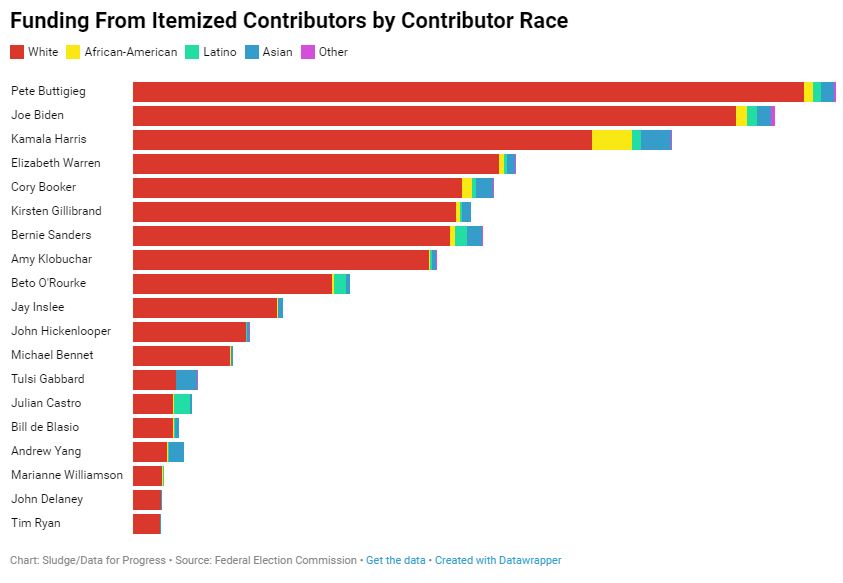 Delaney did not receive a single donation above $200 from a person identified as African-American by our analysis. Ryan received over $200 from only six people of color. Harris had by far the largest number of African-American donors, while Sanders had the most donors in the other non-white categories. 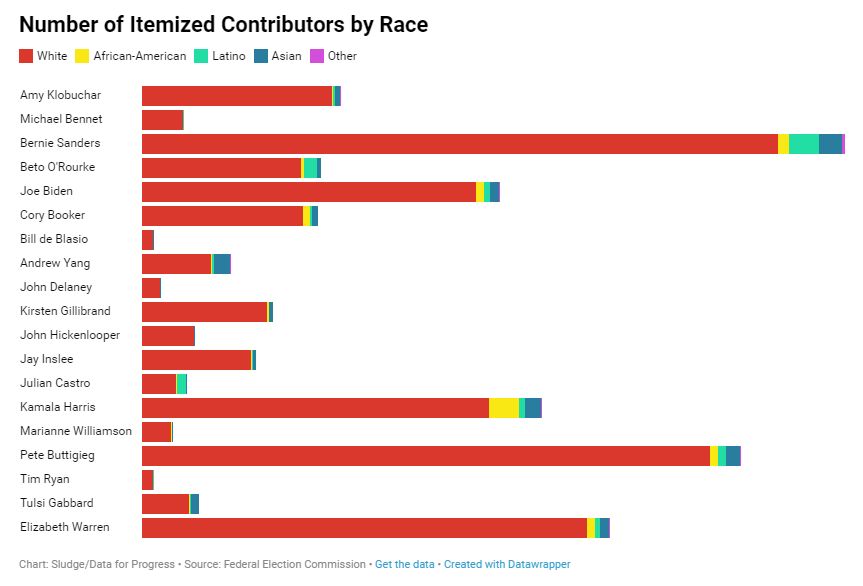 Which Candidates Are Women Funding?

Marianne Williamson might not rank high in the overall money race, but she’s far out in front when it comes to building a donor base of women. More than three-quarters of Williamson’s individual donation total came from women contributors in the first half of 2019, a far larger share than the candidate with the next-largest share: Harris, with 56%. Former Texas Rep. Beto O’Rourke is the only man running with over half of his support coming from women donors, and Hawaii Rep. Tulsi Gabbard ranks last in share of itemized donation total from women donors at just 30%. 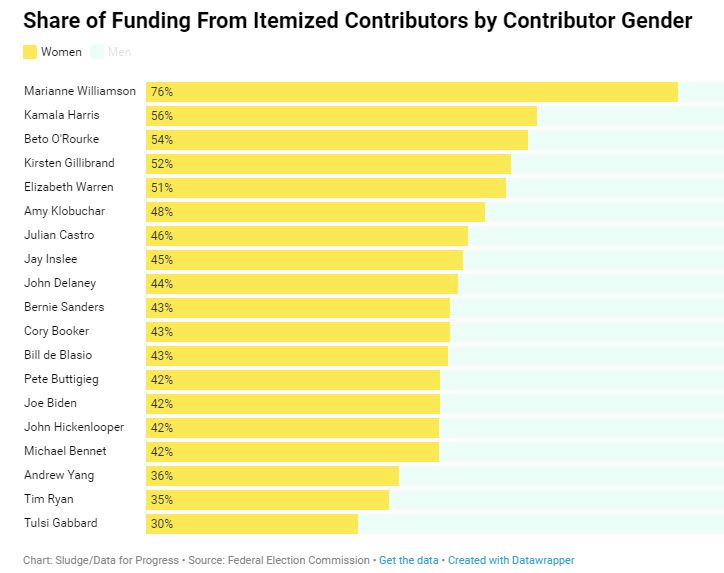 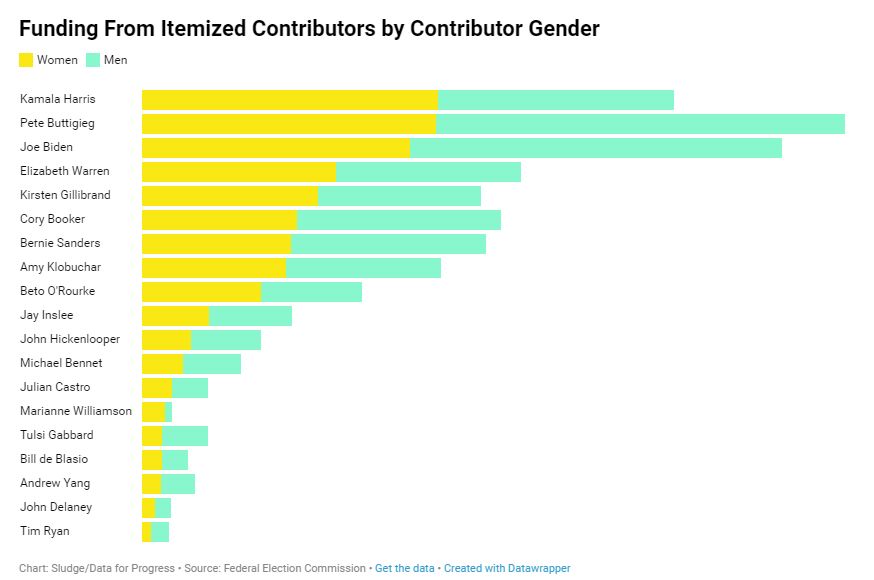 How Old Are the Democrats’ Donors?

Andrew Yang, whose signature policy is to pay every adult U.S. citizen a universal basic income of $1,000 a month, had the largest share of his individual donation total from donors between 18 and 34 years old. Bennet, who received the largest share from 50- to 64-year-old donors, had the lowest share of young donors, with just 1.8% of his itemized fundraising coming from donors between the ages of 18 and 34, just below Klobuchar. 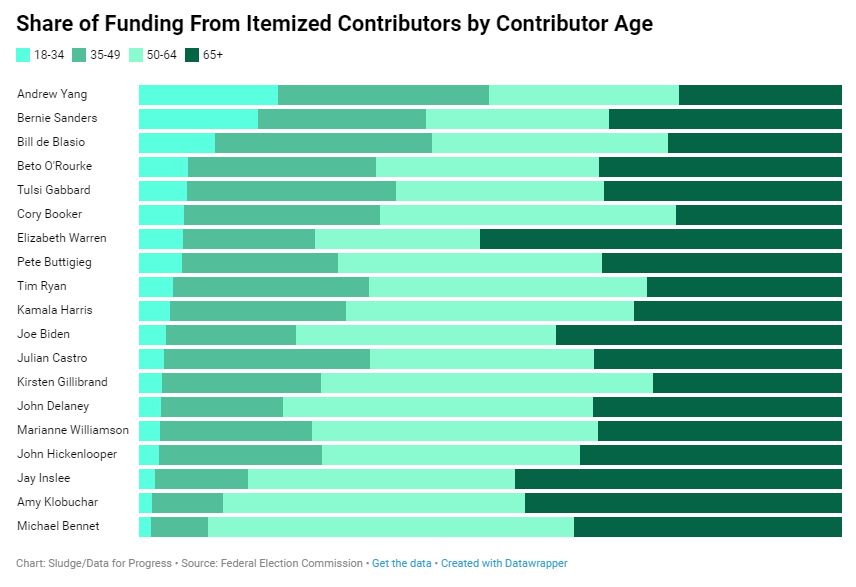 While Yang had the largest share of fundraising from young donors, Sanders raised the largest amount from the 18 to 34 age group, by far (over $624,000). By contrast, Joe Biden raised more than any other candidate from people 65 years or older (over $2.7 million). 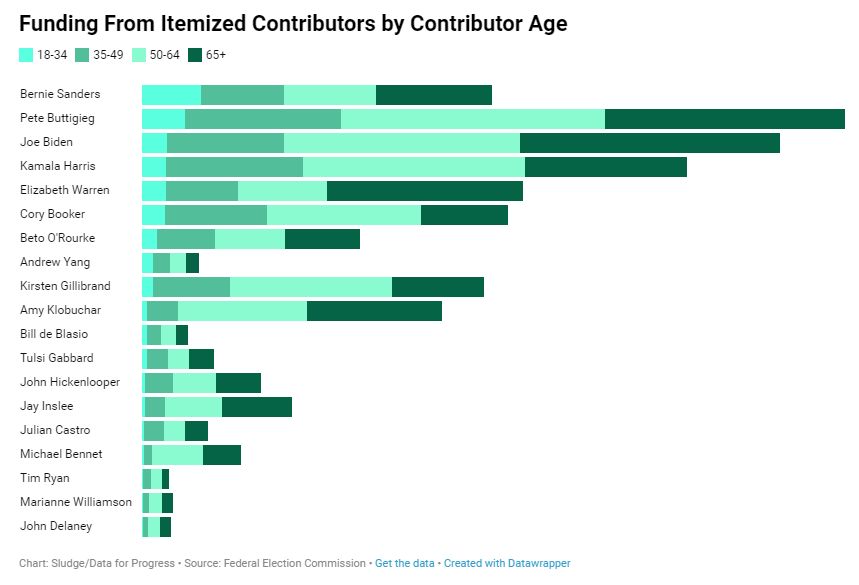 What Portion of the Donors Are Liberal?

Several of the Democrats running for their party’s nomination had a majority of donors who are not aligned with the Democrats or other liberal political parties. Ryan, O’Rourke, Washington Gov. Jay Inslee, Klobuchar, Yang, Gabbard, former HUD Sec. Julian Castro, and Williamson all received donations from more people who are independents, conservatives, or have no party affiliation than from people registered with liberal parties. De Blasio and Delaney had the largest shares of conservative donors, while Michael Bennet has the largest share of liberal donors. 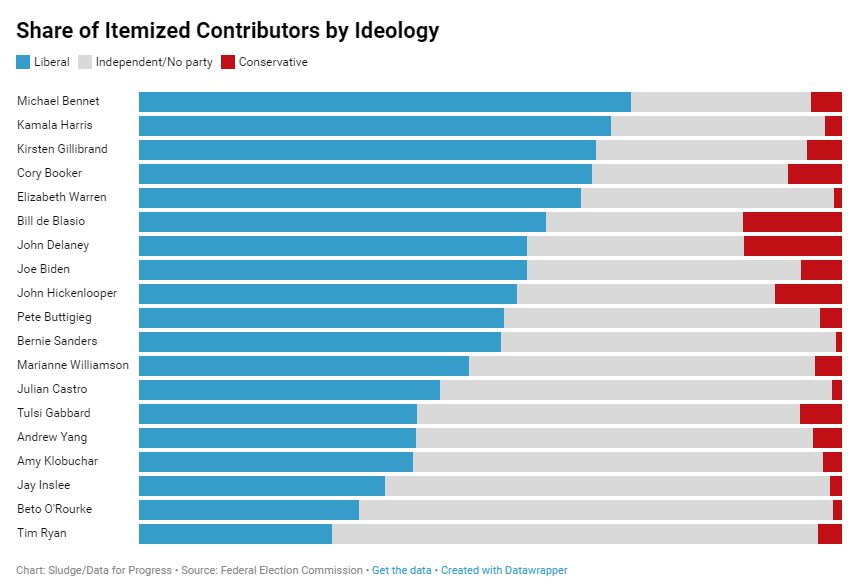 Here is summary data for the share of itemized fundraising totals from the five variables we investigated.

Where the 2020 Candidates Stand on Campaign Finance

Donald Shaw Money-in-politics reporter. Co-founder of Sludge. Journalist who focuses on special interests’ efforts to influence politicians and shape public policy. He has been a reporter at MapLight, where he exposed correlations between campaign contributions and votes, and at OpenCongress.

Alex Kotch is senior investigative reporter at Sludge. A PhD and campaign finance expert, he and his colleagues at International Business Times won a “Best in Business” award from the Society for Advancing Business Editing and Writing for their coverage of the 2017 Republican tax legislation. Alex’s work has been published by more than two dozen media outlets including The American Prospect, The Nation and Vice.com. Read more about Alex at his personal website.

Want to see more reporting like this? Become a Sludge member for $5 a month to support our work.