HBO's Succession peeled back the layers of the all-powerful Roy family, a Murdoch-like media empire built by despicable, ruthless people, and what it showed us was more putrid and awful than we ever could have imagined. 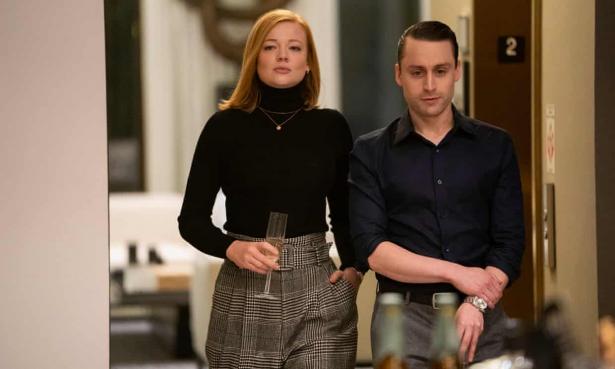 Half the fun is waiting to see what the vile characters will sneer about next ... Succession., Photograph: HBO

In an era when every decision of vital importance appears to have been taken somewhere hidden from the public, Succession (Sky Atlantic) promised a peek behind the curtain. It peeled back the layers of the all-powerful Roy family, a Murdoch-like media empire built by despicable, ruthless people, and what it showed us was more putrid and awful than we ever could have imagined. It was clever and vicious, a black comedy dressed up as a serious drama; watching these people tear each other apart was a fine spectator sport. It spent its first season building to a gruesome climax, as the favourite son, Kendall, plotted the takeover of Waystar Royco to get revenge on his father, Logan (a chillingly good Brian Cox), only for his father to turn around and pummel him right back into the ground.

The corporate world moves quickly: the series returns just 48 hours after a wedding so horrifying it made EastEnders Christmas specials look cuddly. Shiv, the smartest of the siblings, married Tom, an ambitious but paper-thin social climber with all the backbone of a jellyfish, in an extravagant Scottish affair. Matthew Macfadyen, who usually plays the hunk, is perfectly watery-eyed as the new son-in-law who thinks he knows what he has married into, but in truth has no idea of the depths. Soon, the pair are trying to convince one another that they would rather be on their honeymoon than in the middle of the snake pit. It doesn’t hold.

Kendall, still shellshocked from his failed part in the takeover – and from accidentally killing a young waiter – has been sent where every ultra-rich sinner goes to repent: on a spa break. But he is soon called back into the fray by his father, who uses the knowledge of his son’s crime to pull his strings and make him dance.

Even without Kendall, Logan’s rivals Stewy and Sandy have decided to proceed with the “bear hug” and attempt to buy him out. The siblings, shocked by what Kendall has done, but only in so far as they didn’t think he had it in him, are forced to help Logan decide what to do. Waystar Royco is a legacy media company that will probably be eaten by the tech world; the best advice suggests that only one or two such corporations can survive for the next few years. The price being offered is good. Should they cash in while they can?

Logan’s decision will come as no surprise, unless the expectation was that Succession would turn into a kind of “Rich Kids of New York” reality show. It sets up several potentially monstrous battles that should sustain season two nicely. Logan needs to name a successor and he makes a pitch for his preferred choice. Although it is the obvious pick, one of the joys of this show is that absolutely nobody can be taken at their word. It is there in the writing, when characters have one conversation while clearly talking (or swearing) about something else entirely.

The writing is so creatively foul that it fills the gap left by its sibling in crudeness, Veep (one episode of which was written by Jesse Armstrong, who created Succession and penned this episode); half the fun is waiting to see what the interminably vile Roman will sneer about next. Never above bold imagery, a family summit at the Roys’ Hamptons mansion is punctured by the odour of a rotting animal, pervading every room. “It smells like the cheesemonger died and left his dick in the brie,” roars Logan, whose thirst for revenge extends even to his builders.

Succession is skilled at steadily and surely raising its characters up to multidimensional horrors: allowing Shiv to show her true colours, turning from the principled, independent one into an operator more ruthless than any of her brothers; allowing the hollow, dim Connor to recognise that the highest office in the land would be a reasonable culmination of his innate sense of entitlement to whatever he desires.

This opening episode does everything Succession does best, giving us wicked sibling summits, the blackest of black humour, those delicate little manoeuvres of power that seem harmless until they emerge at the centre of absolutely everything. Its boldest move is to refuse to give these monsters any sort of comeuppance, but that unrelenting bleakness works in its favour and makes it all the more convincing. My only complaint about an otherwise flawless episode is that Greg, who plays dumb but learns quickly, was not as present as he should have been. Nevertheless, I suspect that the future of Waystar Royco will somehow involve his baby-steps double-dealings.

… has never been more important in American public life. Guardian journalism, driven by fact-based reporting, offers an independent voice of reason at a time when the national conversation is divisive and embittered. At a time of acrimony, America is in need of public civility. For 200 years Guardian journalism has been committed to giving expression to hope, not hate, and choosing fairness over fear.

More people are reading and supporting The Guardian’s independent, investigative journalism than ever before. And unlike many news organisations, we have chosen an approach that allows us to keep our journalism accessible to all, regardless of where they live or what they can afford. But we need your ongoing support to keep working as we do.