The age of George Meany is long gone. Now, as Professor McCartin says, American labor may be heading in a whole new direction. "I believe it's highly likely that the next leader of the AFL-CIO will be a woman." 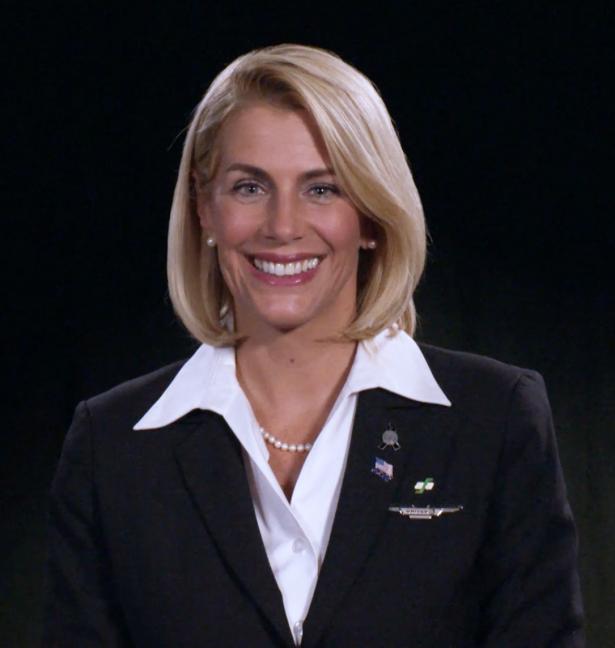 Sara Nelson, the president of the Association of Flight Attendants-CWA, has been called the most powerful labor leader in the country, as she has fought for increased safety in the aviation industry.,

The woman dancing around the picket line is Sara Nelson, president of the Association of Flight Attendants-CWA. Don't be fooled by her playfulness; she's been called "the most powerful labor leader in the country."

Her steeliness came through in a speech she gave – a call to arms, really – to the AFL-CIO on January 20, 2019, in the midst of the federal government shutdown.

"What is the labor movement waiting for?" she said. "End this shutdown with a general strike!" 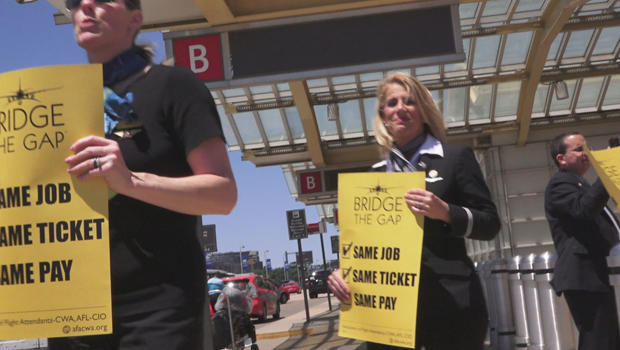 The last time there was a general strike in the U.S. was 1946. In this case, Nelson was calling on all 12 million members of the AFL-CIO to walk out en masse.

Nelson explained: "We have real power as workers. If we decide not to participate in this economy, it stops. Everything stops."

"But what you said came as a surprise to most people," said correspondent Lesley Stahl.

"This was an extraordinary moment. Four-hundred-thousand people are forced to come to work without pay. And the people that I represent are going to work in an increasingly unsafe condition. What is the labor movement waiting for?"

By unsafe, she was referring to how the government shutdown was putting stress on airport screeners and others (including air traffic controllers) working without pay.

She told Stahl, "If it is unsafe, we will refuse to work those flights."

"Well, when you put it in the terms that you did, and that you are right now, there's an implicit threat: You're gonna shut down the whole economy."

After her call for a strike, "There were a handful of air traffic controllers who said, 'I can't, I'm too stressed, I'm too tired, I can't medically do my job.' And the planes stopped. And we said, 'Do we have your attention now, Leader McConnell?'" Nelson laughed. "And a few hours later, we had a resolution."

On January 25, Americas longest government shutdown came to an end, and Sara Nelson became a hero. But she's fortunate. In one of the biggest strikes involving aviation workers, labor lost.

Nelson was in third grade in 1981, when PATCO, the Professional Air Traffic Controllers Organization, led a strike of its 11,000 members for better pay.

"Our position has to be irreversible," President Ronald Reagan said. "There is a law, and an oath that they signed."

So, the president fired them all.

"The PATCO strike had a devastating impact on the labor movement in 1981," said professor Joe McCartin, who teaches labor history at Georgetown University. "Not just air traffic controllers who lost their jobs, but the whole labor movement was dispirited by it."

Since then, union membership has declined from 20% of all American workers, to only 10%. 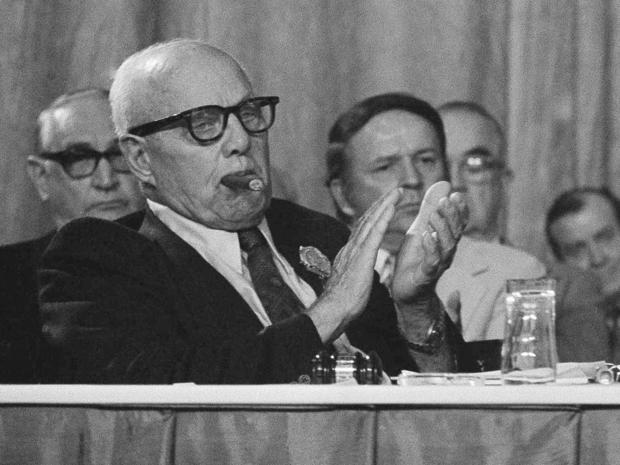 McCartin says Sara Nelson brings something new, and inspiring, to the union movement: "If you say 'union leader' to most people, they still, I think, have in their mind the image of a cigar-chomping George Meany [the first president of the AFL-CIO].

"And when you meet Sara Nelson, she clearly doesn't fit that image."

Nelson became a flight attendant 24 years ago, when a college friend sold her on the idea. Once she started, she moved all over the country, flying out of Washington, Chicago and Boston.

One of the planes that went into the Twin Towers on 9/11 flew out of Boston. "I flew Flight 175 a week earlier," Nelson said. "And I was friends with everyone on the plane."

In her office she keeps photos of Michael Turo and Amy King, who were on United Airlines Flight 175 out of Logan International Airport: "Good friends, and I keep them next to me every day," she said.

"We were taught up to that point that if there's a hijacker on board, that we were supposed to appease the hijacker, try to keep the hijacker calm, do what they say. That was part of training; that was in our handbook."

But the flight attendants on 9/11 didn't follow the handbook. "They fought back," Nelson said. "They decided instantaneously to do that. And so, our role changed even before we were told that it should change."

Almost everything about what it means to be a flight attendant has changed. It wasn't so long ago that "stewardesses" couldn't be more than 32 years old, had to be under a specific weight, and couldn't get married.

"Sexism," said Stahl. "This is a huge issue for people in your line of work."

Nelson said, "Our profession was objectified and sexualized by airline marketing. This is what was sold."

An ad like National Airlines' 1974 commercial featuring a stewardess in a bikini ("You can fly me morning, afternoon, or night. Just say when. I'm Judy. And I was born to fly. Fly me") would be unthinkable today.

But Nelson says not all the changes in her industry have been for the better; with seat space shrinking, airlines have been packing more passengers onto planes, with fewer airline attendants on flights. "The airlines are staffing at the federal minimums today," she said. "And prior to 9/11, they were staffing 25 and 50% over on a regular basis.

"So, let me get this straight," asked Stahl. "More people on each plane in a tighter configuration, and fewer flight attendants?"

Which brings us to the Boeing 737 Max jet that crashed in both Indonesia and Ethiopia, killing hundreds, and leading to the plane's grounding – and to Congressional hearings.

On June 19, both hero pilot Chesley "Sully" Sullenberger and Sara Nelson were called to testify before the House Subcommittee on Aviation.

Sullenberger said, "These accidents should never have happened."

Nelson said, "I'm here today because the public looks to flight attendants when it comes to aviation safety." 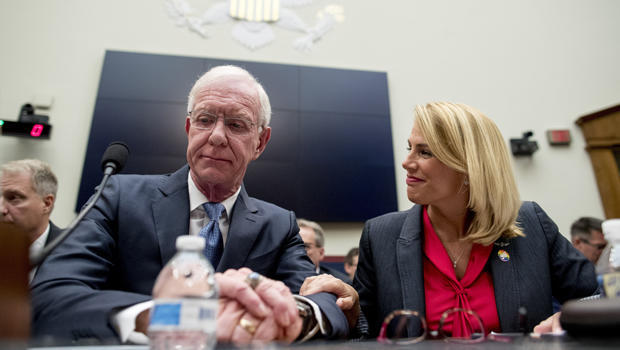 Captain Chesley "Sully" Sullenberger and Sara Nelson, of the Association of Flight Attendants-CWA, speak before a House Committee on Transportation and Infrastructure hearing on the status of the Boeing 737 MAX on Capitol Hill in Washington, June 19, 2019.  ANDREW HARNIK/AP

Nelson explained to Stahl, "The evidence was mounting and action was being taken around the world; we called for a grounding."

"Does your union have the power to keep that plane [on the ground]?"

When she's not calling for strikes or grounding airplanes, Nelson raises her rambunctious son, Jack, along with her husband, David. But union duties often intrude. ("FAA administrator wants to meet with me now. It's about Boeing.")

"You're a working mother. You have a big job, and you're like all the other working mothers around the country having to do that balance thing," said Stahl.

"I think you think about your job in very idealist terms?" Stahl said.

"I think about it as my calling."

She certainly has a way of revving up her troops. At times she's like a cheerleader, breaking into song on the picket line. "Sometimes I can't help but sing," she laughed. "With a group of people, it's just the thing to bring everyone together." (Though she admitted, "I'm a little out of practice!")

"You are no George Meany, is all I can say," Stahl laughed.

The age of George Meany is long gone. Now, as Professor McCartin says, American labor may be heading in a whole new direction. "I believe it's highly likely that the next leader of the AFL-CIO will be a woman."

Will it be Sara Nelson? "Quite possibly. She certainly put herself in the conversation."

When asked if she wants that job, Nelson told Stahl, "I'm open to that, and I'm open to the idea that we can really rebuild this labor movement."

"Are you ready to stand up to management? 'Cause they're gonna do everything they can to keep the labor movement down."

"Well, the rules in this country have been written for Wall Street," Nelson said. "And it's going to stay that way until we force it to go the other way.

"People need to understand that this is our country, and this is our work, and we should be respected for it, and paid for it."