A complete list of the ways labor changed American history would be immeasurably long—but, for Labor Day, here are three of the top ways unions helped American workers. 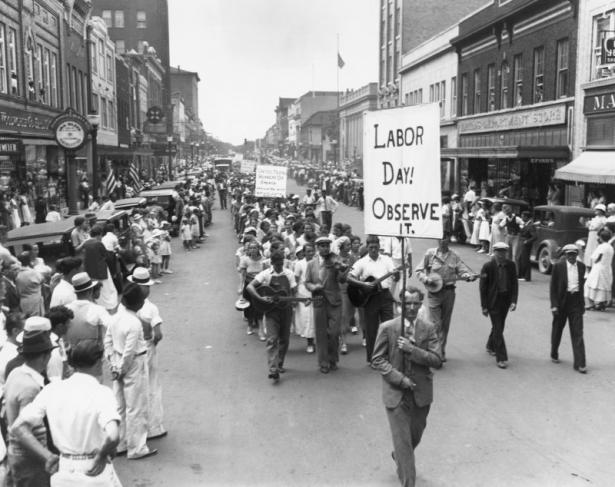 Bumper stickers aren’t known for being the most trustworthy sources of historical fact, but the one that proclaims that weekends are “brought to you by the labor movement” gets it exactly right. If anything, it doesn’t go far enough.

Indeed, employers and elected leaders did not implement the five-day workweek out of the goodness of their hearts. Rather, workers and their unions agitated lobbied, organized, struck and voted for decades to achieve these gains. As Frederick Douglass, the legendary African American activist, once declared: “Power concedes nothing without a demand. It never did and it never will.”

A complete list of the ways labor changed American history would be immeasurably long—but, for Labor Day, here are three of the top ways unions helped American workers:

When the industrial revolution commenced in the early 19th century, industrial workers toiled as long as farmers did: from sunup until sundown. Ten-, 12-, and even 14-hour days were common in mills and factories as well as printshops, restaurants and retail stores.

The first, halting efforts by workers to demand a shorter workday began in the 1860s. After a generation of fits and starts, in 1886, a nationwide movement arose that culminated on May 1 when hundreds of thousands of workers stayed away from work to push employers for eight-hour days. These efforts largely failed.

So, too, when union workers of Andrew Carnegie’s monopolistic steel company were defeated in 1892 at “Bloody Homestead” (just outside of Pittsburgh), the steel industry instituted 12-hour days, seven days a week. Every other week, steelworkers were compelled to make the hated “long turn,” a 24-hour shift.

Only in the 1930s did the tide turn for workers. With Franklin D. Roosevelt in the White House, allies in Congress, and the first female cabinet member in Secretary of Labor Frances Perkins, a series of reforms were implemented. In 1938, Congress passed the Fair Labor Standards Act that established the eight-hour day and five-day week for wage-workers. But don’t solely thank the politicians. As FDR once told union and civil-rights leader A. Philip Randolph, he agreed with the labor movement’s ideas, but he needed the activists to “go out and make me do it.”

The American working class has always been more ethnically and racially diverse than the middle and upper classes. Just consider who does the most dangerous, dirtiest and lowest-paid work. When the transcontinental railroad lines started being built in the 1860s, guess who laid the track? Chinese contract laborers, Mexican Americans, Irish immigrants and recently emancipated African Americans. Fast forward to the early 20th century, who worked in the nation’s factories and mills? Croats and Jews, Norwegians and Italians—essentially European immigrants and their children. Even today, those who pick the nation’s fruits, grains and vegetables are overwhelmingly immigrants of color.

The United Auto Workers helped bankroll the legendary March on Washington for Jobs and Freedom in 1963. Cesar Chavez and Dolores Huerta—perhaps the most revered Mexican American leaders to this day—led the United Farm Workers of America. Martin Luther King Jr. regularly advised black workers to unionize and was murdered while helping sanitation workers in Memphis win a strike and contract.

It should go without saying that the labor movement, in a nation that has yet to live up to its ideal of equality, also has engaged in racism, sexism and xenophobia. But on the whole, and particularly in recent decades, the diversity of the labor movement has set an example other national organizations could learn from— and has taken steps to make sure workers are protected regardless of race, sex, sexuality, religion, nationality or legal status.

While progress also came through union contracts, most American workers never have been unionized, so public policy is the key vehicle for labor protections. Across the so-called New Deal era, the 1930s into the 1970s, a succession of laws sought to make American workplaces safer. The Fair Labor Standards Act of 1938 abolished child labor. The Occupational Safety and Health Act and Mining Enforcement and Safety Act, both passed in 1970, resulted in huge improvements to workplace safety. In particular, the Oil, Chemical & Atomic Workers Union, led by Tony Mazzocchi and along with the widely-known activist Karen Silkwood, was a powerful force in the struggle for workplace safety and passage of these landmark laws. In 2017, only 5,147 workers died on the job even though the U.S. population had increased more than threefold in the prior hundred years.

Despite such tremendous gains, many American workers are overworked and arguably underpaid.

Compared to workers in other industrialized countries, American workers toil far more hours and receive far fewer days off. The World Economic Forumreports that U.S. workers, on average, labor 1,783 hours a year—compared to 1,363 hours for German or 1,470 hours for French workers. According to the American Time Use Survey (ATUS), in 2018 men with full-time jobs labored 8.99 hours a day and women 8.56 hours, though most women also perform several hours a day of unpaid household labor.

Not coincidentally, the reversal of American workers’ gains has happened alongside an enormous decline in unions. Membership peaked around 33% in the mid-1950s and was about 20% in 1983. Starting in the 1980s, what has been a steady decline looks more like jumping off a cliff.

With declining worker power has come a dramatic rise in wealth inequality, now at heights last seen in the 1920s—that is, before the major growth in unions in the 1930s and 1940s.

So, sure, thank a unionist for the fact that children don’t work down in the mines, for the creation of minimum wage and overtime laws, the eight-hour day and the 40-hour week, workplace safety, health insurance, paid vacations and the possibility of a retirement lived in dignity. But also consider the help American workers could still use today.

Peter Cole is a Professor of History at Western Illinois University and a Research Associate at the Society, Work and Development Institute at the University of the Witwatersrand in South Africa. He is the author of Dockworker Power: Race, Technology & Unions in Durban and the San Francisco Bay Area andWobblies on the Waterfront: Interracial Unionism in Progressive Era Philadelphia.