Geologists have reconstructed a quarter-of-a-billion-year-long history of a vanished landmass now submerged largely below southern Europe. 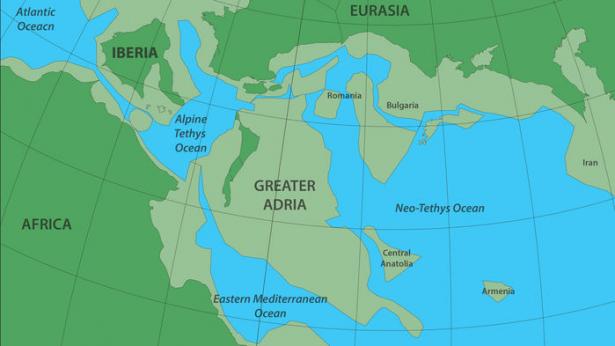 Forget the legendary lost continent of Atlantis. Geologists have reconstructed, time slice by time slice, a nearly quarter-of-a-billion-year-long history of a vanished landmass that now lies submerged, not beneath an ocean somewhere, but largely below southern Europe.

The researchers’ analysis represents “a huge amount of work,” says Laurent Jolivet, a geologist at Sorbonne University in Paris who was not involved in the new study. Although the tectonic history of the landmass has been generally known for a few decades, he says, “[T]he amount of detail in the team’s systematic time-lapse reconstruction is unprecedented.”

The only visible remnants of the continent—known as Greater Adria—are limestones and other rocks found in the mountain ranges of southern Europe. Scientists believe these rocks started out as marine sediments and were later scraped off the landmass’s surface and lifted up through the collision of tectonic plates. Yet the size, shape, and history of the original landmass—much of which lay beneath shallow tropical seas for millions of years—have been tough to reconstruct.

For starters, Greater Adria had a violent, complicated history, notes Douwe van Hinsbergen, a geologist at Utrecht University in the Netherlands. It became a separate entity when it broke away from the southern supercontinent of Gondwana (which comprised what is today Africa, South America, Australia, Antarctica, the Indian subcontinent, and the Arabian Peninsula) about 240 million years ago and started to move northward, scientists believe. About 140 million years ago, it was a Greenland-size landmass, largely submerged in a tropical sea, where sediments collected and slowly turned into rock. Then, as it collided with what is now Europe between 100 million and 120 million years ago, it shattered into pieces and was shoved beneath that continent. Only a fraction of Greater Adria’s rocks, scraped off in the collision, remained on Earth’s surface for geologists to discover.

Another complication is that Greater Adria’s rocks are dispersed across more than 30 countries, in a swath from Spain to Iran. So, like the rocks themselves, data have been scattered and thus are difficult to collect, van Hinsbergen says. And finally, he notes, until the past decade or so geologists haven’t had the sophisticated software needed to perform such byzantine reconstructions. “The Mediterranean region is quite simply a geological mess,” he says. “Everything is curved, broken, and stacked.”

In the new study, van Hinsbergen and his colleagues spent more than 10 years collecting information about the ages of rock samples thought to be from Greater Adria, as well as the direction of any magnetic fields trapped in them. That let the researchers identify not just when, but where, the rocks were formed.

Rather than simply moving north with no change in its orientation, Greater Adria spun counterclockwise as it jostled and scraped past other tectonic plates, van Hinsbergen’s team reports this week in Gondwana Research. Although the tectonic collision happened at speeds of no more than 3 to 4 centimeters per year, the inexorable smash-up shattered the 100-kilometer-thick bit of crust and sent most of it deep within Earth’s mantle, van Hinsbergen says.

The study is not the only evidence for Greater Adria as a lost continent. Other researchers who use seismic waves to generate computerized tomography–like images of structures deep within Earth have created an “atlas of the underworld”—a graveyard of slabs of crust that have sunk into the mantle. This research shows that portions of Greater Adria now lie as much as 1500 kilometers below our planet’s surface.

Sid is a freelance science journalist based in Crossville, Tennessee. He specializes in earth sciences and paleontology but often tackles topics such as astronomy, planetary sciences, materials sciences, and engineering. Sid has a bachelor’s degree in natural science from Christian Brothers College in Memphis, Tennessee; bachelor’s and master’s degrees in aeronautical engineering from the Air Force Institute of Technology in Ohio; and a master’s degree in journalism from the University of Missouri in Columbia.

In 2009, Sid won the Award for Distinguished Science Journalism in the Atmospheric and Related Sciences from the American Meteorological Society. And in 2002, he was co-winner of the American Astronomical Society’s Solar Physics Division’s Award for Popular Writing on Solar Physics. Sid’s writing also appears in Nature, Scientific American, the Proceedings of the National Academy of Sciences, Science News, and Science News for Students.