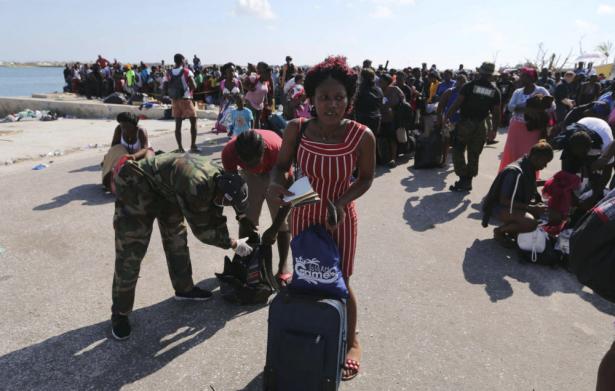 A Bahamas Army officer registers the people prior boarding a ferry to Nassau at the Port in Marsh Harbor, Abaco Island, Bahamas,Photo: Fernando Llano/AP

The Leadership Conference Education Fund's study, "Democracy Diverted," revealed that nearly 1,200 of the polling places were closed between the 2014 and 2018 midterm elections.

North Carolina targeted half a million voters (561,693) based on the measurably racist and absurdly wrong Crosscheck list. The vote scam showed that well over 100,000 voters were wrongly purged for supposedly being registered or voting in two states.

In a red state long hostile to abortion rights, this is believed to be a first-of-its-kind program for any U.S. city.

The Problem with Canceling the Arnautoff Murals

Adopting the hashtag #paintitdown, anti-mural groups insisted that the Board of Education accommodate its desire for a safe space by destroying them. The events set off a furor, still in progress, pitting concerns about history, censorship, and education against demands for respect, social justice, and redress.

In big cities across the country, traditionally punitive prosecutors’ offices are being taken over by enlightened newcomers.  These electoral results have been fueled, to a considerable extent, by the fury directed at police shootings, and the newly elected prosecutors have pledged to make their offices accountable to the communities they serve.

After Dorian, a Glimpse of Ecofascism

As I watch the video of those distraught Bahamian ferry passengers being told they're suddenly not welcome here in the U.S., I see glimpses of a once-dormant but now resurgent movement that's best described as ecofascism.

Trump’s supporters are attracted to his cruelty because of their cult-like relationship with him — a relationship that represents a dire threat to the safety of our country and the future of our democracy.

The Trump administration thinks the court is its personal fixer. The court isn’t doing much to disabuse it of this idea.