Why the Private Health Insurance Industry Faces an Existential Crisis

A former health insurance executive says the moment the insurance industry fears most has arrived. 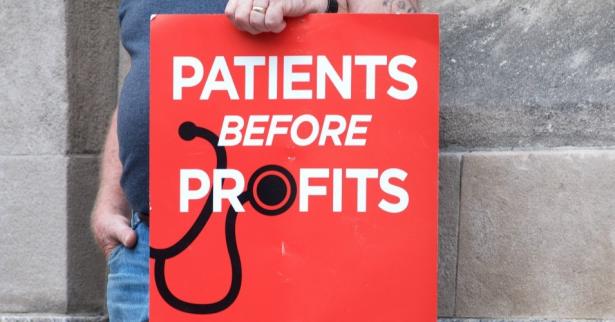 In my 20 years working inside the industry and the 11 years I’ve been watching from the outside, I have never seen such high support among the people who get their coverage through their employers for switching to a publicly financed, privately delivered , (Photo: Bastiaan Slabbers/NurPhoto via Getty Images)

I have told a lot of stories about my time near the top of the health insurance industry. This is not one I’ve ever shared, until now.

Shortly before I left Cigna, I was at a meeting of the company’s senior executives. This was as then-presidential candidate Barack Obama was gaining traction in national polls and filmmakers like Michael Moore were documenting how broken our health insurance system had become. Our CEO at the time, Edward Hanway, had just been asked a simple question by the company’s top attorney: “What keeps you up at night?”

He responded without hesitation. “Disintermediation.”

I had never heard the term and had to look it up. The definition: cutting out the middleman.

What scared us most at the health insurance companies was our place on the priority list for patients. We know people want to see their doctor, visit their preferred pharmacy or attend any hospital in an emergency. This makes doctors, dentists, pharmacists and nurses essential to the delivery of health care. They’re the faces of it. Behind the scenes are companies that make drugs and machines important to treatment, along with people who conduct research and implement health policies.

Our health insurance companies, in contrast, are not essential. They don’t treat anyone. They don’t prevent anyone from becoming sick. They don’t take you to the hospital or make sure you take your pills. They don’t fund or discover medical innovations. They’re simply middlemen we don’t need. And in the industry, we always dreaded the day American businesses and patients would wake up to that reality.

That day has come.

A majority of America’s small businesses now support Medicare for All. So do a majority of Americans who receive health insurance through their employer. In my 20 years working inside the industry and the 11 years I’ve been watching from the outside, I have never seen such high support among the people who get their coverage through their employers for switching to a publicly financed, privately delivered health care system.

This is a watershed moment for Medicare for All and America’s health insurance companies. Fifty-eight percent of nonelderly Americans receive health insurance through their employer. Now most of them—and their employers who pay handsomely to provide insurance—have decided they’d rather work with the government (through an improved and expanded Medicare program) than continue a relationship with private insurers. That is a stunning rebuke of the private sector, though not one that has been unforeseen, as health insurers charged an average of $6,715 per insured employee last year—and $20,000 for a family plan—according to the Kaiser Family Foundation.

There are two things to note about how the insurance industry has responded to this development: they’ve simultaneously tried to prevent change and prepared for the unraveling of the employer-based system.

The evidence for both is the “Coverage@Work” PR and lobbying campaign America’s Health Insurance Plans launched last year. Even though the percentage of nonelderly Americans enrolled in employer-sponsored plans has declined from 67 percent to 58 percent over the past decade, despite the Affordable Care Act mandating insurance be given to all full-time employees, companies like the one I used to work for continue to make a lot of money on these kinds of plans. The industry wants to keep employers in the game as long as possible, though they’ve known for more than a decade that the employer-sponsored health insurance system is collapsing.

They’ve also known that we have an aging population, which is why big insurers have placed such a big bet on Medicare Advantage, the private alternative to traditional Medicare. Insurers devote a substantial portion of their sales and marketing budgets to lure Medicare-eligible Americans into Medicare Advantage plans. The bet has been paying off: more than half of some of the big insurers’ revenue (including UnitedHealthcare, the biggest insurer) is now coming from federal and state governments. A growing percentage is coming from their Medicare Advantage business and also from the Medicare supplement plans they sell, as well as from their Medicare Part D pharmacy plans and the Medicaid programs they operate under lucrative contracts with most states.

As he was elaborating on disintermediation, Cigna’s CEO said his fear was that someday American employers and their workers would begin to question the “value proposition” of private health insurers. That’s business-speak for something not being worth what you’re paying for it. That someday has arrived for America’s job creators. They are waking up to realize the middleman is not necessary. It’s time for our policymakers to wake up, too.

Wendell Potter is former Vice President of corporate communications at CIGNA, one of the United States' largest health insurance companies. In June 2009, he testified against the HMO industry in the U.S. Senate as a whistleblower. He is now the Senior Fellow on Health Care for the Center for Media and Democracy in Madison, Wisconsin.