Timing matters. The book under review--a history of whistle blowing-- was released coterminous with news of a whistleblower's alleging evidence of Trump's criminal misfeasance in office, the commission of which could cost him the presidency. 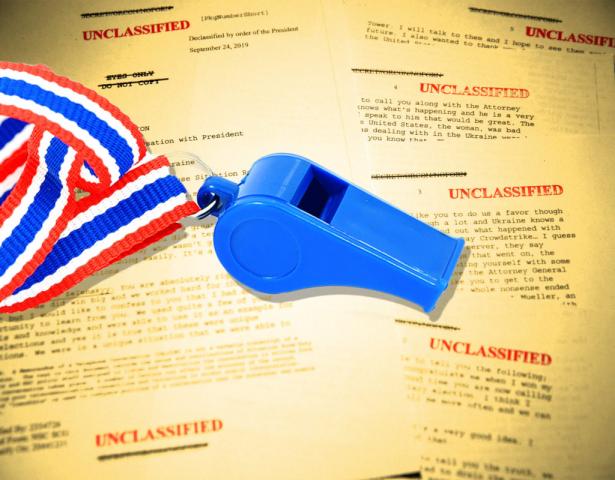 Officially published on Tuesday of this week, Allison Stanger’s Whistleblowers: Honesty in America From Washington to Trump (Yale University Press) is the most synchronistically fortunate book in some while. Some of Stanger’s observations might well have been written this morning. 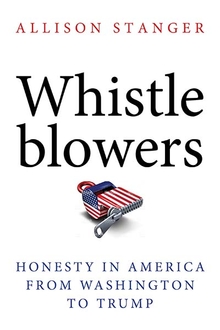 For the moment, then, my role amounts to copying a number of them onto poster board to hang in the public square. Stanger is professor of international politics and economics at Middlebury College. As of Thursday afternoon, she seemed not to be making the rounds on cable news programs. Presumably that will change in very short order, if it hasn’t already by the time you read this.

When and where “whistle-blowing” entered the vernacular is unclear, but Stanger finds it used in newspapers only in the early 1970s. A search of JSTOR seems to confirm this. The first reference to whistle-blowing in a scholarly paper appeared toward the end of 1973 in Public Administration Review, where it was defined as “turning over evidence of organizational malfeasance to the media and interested parties.” The authors identified it a weapon of “the organization guerrilla” -- someone who responded to bureaucratic inertia or malfeasance by “transforming the hierarchical components of the organization; in other words, diffusing power throughout the system.” The concept of the organization guerrilla did not catch on, but that of the whistle-blower did; the latter expression appears in JSTOR with great frequency starting in 1976.

But what Stanger identifies as “the world’s first whistleblower protection law” was in place almost two centuries earlier. The Continental Congress passed it in July 1778, in response to the situation created by Esek Hopkins, the commander in chief of the Continental Navy. Besides his record of insubordination and self-dealing, Hopkins had retaliated against a number of officers who petitioned for his removal from command. Among other things, they objected to his torture of British POWs. Hopkins had two of his critics arrested and sued others for libel. Besides stripping him of his commission, Congress proclaimed:

The same imperative comes through in the passage Stanger quotes from the U.S. Merit Systems Protection Board website on the protection extended to government personnel when “disclosing information that [they] reasonably believe is evidence of a violation of any law, rule, or regulation, or gross mismanagement, a gross waste of funds, an abuse of authority, or a substantial and specific danger to public health or safety.”

Stanger’s essential claim is that whistle-blowing (whether called that or not) was understood as a necessary factor in governance from the very founding of the republic -- and that respect for and defense of the whistle-blower’s role must be revitalized when signs of corruption become evident. But public assent to the value of whistle-blowing is pretty hollow without measures to protect those who practice it. Congress covered the legal expenses of those who stood up to Hopkins, but that was no precedent. Instead, Stanger finds an American tendency “to acquiesce in the paradox” of “applaud[ing] the values of whistleblowers while letting their lives be ruined” -- a tendency that can even be quantified to some degree, given that one study found “federal whistleblowers were roughly nine times more likely to be fired in 2010 than they were in 1992.” Stanger sees this as related to the trend, “consistently reinforced by the media, to accept police abuses if their purported aim was to keep the public safe.”

The corruption of earlier eras looks paltry if not benign in comparison with the present situation: “Where men of means once bribed the government to get their way in the first Gilded Age, today, in many instances, bribes are unnecessary, because men of means are the government,” according to Stanger. A national security and intelligence system with vast but secret budgets is not likely to suffer whistle-blowers gladly. “Hollowed-out government by contract,” she writes, “which dissolves the distinction between public and private action, has rendered government’s daily business wholly opaque and made influence peddling the accepted currency … While technology facilitates whistleblowing and the free exchange of information, it also enhances the tools by which the powerful can retaliate and protect their interests.”

"Honesty in America From Washington to Trump" seems an almost comical subtitle. George Washington, it was said, could not tell a lie; Trump is famously less inhibited. Legend has it that the general declined the opportunity to become king, while the Don is very much of the "L'état, c'est moi" persuasion.

But the contrast also places Stanger's celebration of the courage involved in whistle-blowing in question. Having identified the convergence of economic, political and big-data power as profoundly dangerous, she also looks to the intelligence community (IC) as a source of ethical countermeasures: "All IC leaks are unlawful by definition, but when their purpose is to expose the president’s private war against the rule of law, which is wholly consistent with his public assault on the constitutional order, they must be seen in a different light as nonpartisan whistleblowing in defense of the republic." This passage looks prescient in the light of the revelation that the whistle-blower on Trump's efforts to extort the Ukrainian government into helping his campaign was, in fact, employed by the Central Intelligence Agency. But the odds of the news being seen as "nonpartisan whistleblowing in defense of the republic" seem very long indeed.

Book author Allison Stanger is a political scientist and the Russell J. Leng '60 Professor of International Politics and Economics at Middlebury College and director of its Rohatyn Center for International Affairs. She is also the author of One Nation Under Contract: The Outsourcing of American Power and The Future of Foreign Policy (2009)

[Essayist Scott McLemee is the Intellectual Affairs columnist for Inside Higher Ed. In 2008, he began a three-year term on the board of directors of the National Book Critics Circle. Between 2001 and 2005, he covered scholarship in the humanities as senior writer at The Chronicle of Higher Education, leaving that to help start Inside Higher Ed, where he serves as Essayist at Large. His reviews, essays, and interviews have also appeared in The New York Times, The Washington Post, The Boston Globe, The Nation, Newsday, Bookforum, The Common Review, and numerous other publications. In 2004, he received the Nona Balakian Citation for Excellence in Reviewing from the National Book Critics Circle. Recent essays of his for Inside Higher Ed are available HERE.]