We’re Winning the Fight Against Gerrymandering

No thanks to the Supreme Court — but grassroots reform efforts, pro-voter court rulings, and new political dynamics in key states mean the next round of redistricting is shaping up to be a lot fairer than the last one. 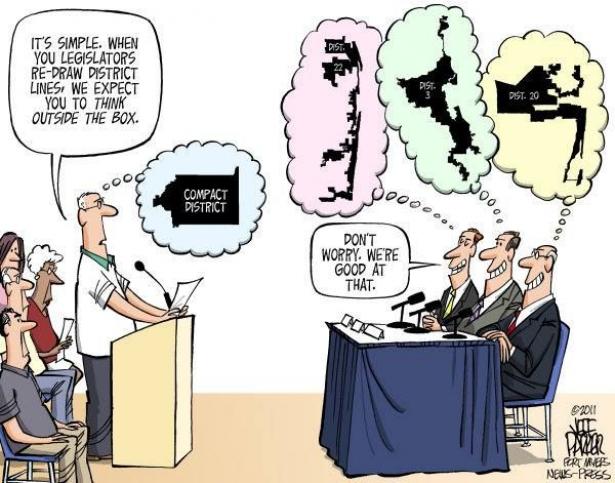 North Carolina voters will finally get a chance to elect their lawmakers using fair maps, thanks to a state court ruling last Tuesday that struck down the existing maps as a gerrymander that violated the state constitution.

But this latest news also serves to highlight a broader shift. As we approach the next redistricting cycle starting in 2021, the outlook for getting fair maps in the states that were most egregiously gerrymandered last time around is much more positive than you might think. A close look at those eight states suggests that — though the gerrymandering threat is by no means gone — things are likely to play out very differently this time, thanks to a combination of voter-driven reform efforts, pro-voter court rulings, and changed political dynamics.

The North Carolina ruling itself is seismic. Whether it affects the state’s congressional map or just the state legislative maps that were directly struck down remains unclear. Also unclear is the ruling’s precedential value, since it was issued by a lower state court, not by the state supreme court. But because it ensures that the 2020 state legislative elections will use fair maps, the ruling will likely lead to a state legislature in 2021 that’s relatively evenly balanced between the two parties — perhaps even with split control — rather than wildly skewed to the GOP against the will of voters, as it is now. (The governor has no role in the process in North Carolina). That alone should make the next redistricting process, through which both state legislative and congressional lines will be drawn, much fairer.

It’s a similar story in Pennsylvania. There, the GOP’s gerrymander of the congressional map was struck down by the state supreme court, setting a clear precedent for fair maps that will extend into the next cycle. There’s also a strong grassroots effort to reform the redistricting process by creating an independent commission of some kind, which could well bear fruit before 2021. And, unlike last time around, state government is likely to be split between a Republican legislature and a Democratic governor, meaning a rigged congressional map can be vetoed.

In two other gerrymandering hotspots from last cycle, voters haven’t waited on the courts, instead approving ballot measures to fix the process. Michigan’s initiative, the product of an inspiring grassroots movement, created an independent commission composed of Democrats, Republicans, and unaffiliated citizens. It’s currently being challenged in court by the state GOP and Republican voters — lawsuits that, reformers fear, could hamstring the panel’s work even if they ultimately fail. But even if that happens, the presence of a Democratic governor with veto power, just like in Pennsylvania, should act as a check on the Republican legislature. In Ohio, Republicans retain full control of state government, but voters approved reform measures — including a bipartisan commission to draw state legislative districts, and criteria for partisan fairness in drawing congressional lines — that look likely to create a fairer process. Those measures originated with the legislature, suggesting even lawmakers get the need for reform.

Virginia could well be next to embrace reform. The legislature passed a constitutional amendment to fix redistricting, though it still needs to clear the General Assembly again before going on the ballot. If it does, and wins approval from voters later this year, the measure would create a commission made up of citizens and legislators and require that maps receive broad approval to be adopted. And again, even if the reform push falters, control of the government may be divided this time around (as it is currently), unlike in 2011.

That leaves three states where the reform outlook is less positive — but even here, there are reasons for hope. Wisconsin also now has a Democratic governor, which should prevent Republicans in the legislature from running the table. Still, any dispute would likely end up before the state supreme court, which is currently controlled by a conservative majority whose rulings have often pleased the GOP.

In Florida, where the Republicans retain full control of state government, several court decisions from recent years establishing stricter criteria for fairness have created some guardrails. But whether they’re enforced will be decided by the state’s supreme court, which a Florida paper this year called the most conservative in decades.

In Texas, too, Republicans enjoy a trifecta. And despite years of litigation over this decade’s maps, there’s little to stop them from pressing their advantage again. But here, another factor could come into play: the state’s rapid demographic changes, which some experts think could make it much more difficult to devise an effective gerrymander that holds up over the decade.  It’s also possible that Democrats win control of the state house, giving them the power to block bad congressional maps and send the process to the courts.

Of course, it’s way too soon to come anywhere close to popping the champagne. In every state, there are plenty of unknowns about how things will play out. And both parties are currently pouring millions into key 2020 state legislative races with the explicit goal of putting themselves in a better position to control the redistricting process that will follow.

Other states beyond the eight worst offenders will be looking to rig their maps, too. Reformers fear several GOP-controlled states including Missouri, Oklahoma, and South Carolina, where Democrats managed to peel off a congressional district last year, may try to shore things up so that never happens again.

If the next cycle produces much fairer maps than the last one did, as looks likely right now, it’ll be thanks largely to the hard and smart work — in the streets, at the polls, and in the courts — of reform backers. Amid the justified concern over the fairness of our democracy, that’s worth taking a moment to acknowledge. Still, those who care about fixing our broken redistricting process can’t afford to take their foot off the pedal for a second.

The views expressed are the author's own and not necessarily those of the Brennan Center.

Zachary Roth is a fellow and former editorial director of the Brennan Center. Prior to joining the Brennan Center, he was a national reporter at MSNBC. He is the author of The Great Suppression: Voting Rights, Corporate Cash, and the Conservative Assault on Democracy (Crown), which was the runner-up for the 2017 J. Anthony Lukas Prize awarded by Columbia Journalism School and the Harvard Neiman Foundation. He has written for the New York Times, Los Angeles Times, Atlantic, New Republic, Slate, Salon, and other outlets.

Support The Brennan Center: We fight to make elections fair, end mass incarceration, and preserve our liberties — in Congress, the states, the courts, and the court of public opinion. Join us in building an America that is democratic, just, and free.