President Trump Is at War with the Rule of Law. This Won't End Well.

At the top there’s corruption, down below there’s dismantling and disarray. Americans are entering a period of immense danger 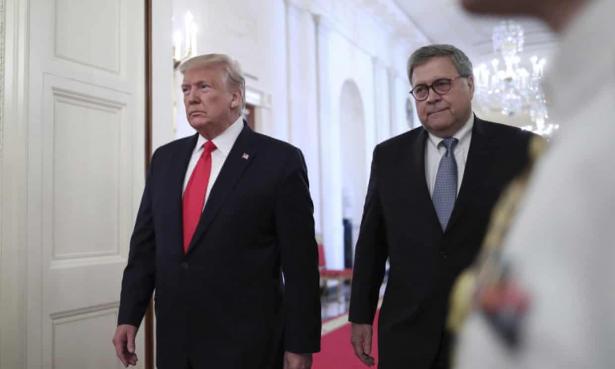 ‘William Barr has been bouncing all over the globe pushing the president’s lawless agenda to promote conspiracy theories, smear rival candidates, use foreign aid as bribes or withhold aid as punishment.’ , Photograph: Andrew Harnik/AP

Do Americans still have a government? I do not know. What I do know is that President Trump and the upper echelons of the executive branch are at war with the legislative branch, the rule of law, the constitution, federal civil servants and the American people. It’s a conflict that pulls in many directions, and if the president threatened civil war the other day as something that could happen if he doesn’t get his way, we can regard the ordinary state of things as a low-intensity civil war or a slo-mo coup that’s been going on from the beginning. Tuesday’s White House refusal to cooperate with the impeachment inquiry only escalates their defiance and their chaos.

The chaos takes so many forms. Innumerable stories have made it clear that even the president’s own aides and cabinet members treat him like a captive bear or a person having a psychotic breakdown – like someone unstable who must be kept from harming himself and others. They have done that by heaping on the flattery, and by warping and limiting the information he receives, and often by doing their best to prevent his directives from being realized.

The New York Times recently reported on a March meeting about the border. According to aides, Trump “suggested that they shoot migrants in the legs to slow them down”. When he was told that wasn’t allowed, he ordered that the border be closed. That set off a “frenzied week of presidential rages, round-the-clock staff panic and far more White House turmoil than was known at the time. By the end of the week, the seat-of-the-pants president had backed off his threat but had retaliated with the beginning of a purge of the aides who had tried to contain him.”

This is the kind of story we’ve become used to – outrages and viciousness and inanity and all – but it’s worth reading another way, as a story about a bear lashing out at whatever’s around him and gobbling up the scraps they feed him while he is still chained to the wall. When we refer to the “president” we really mean whatever ad hoc group of people with proximity is manipulating him, lying to him, or preventing him from knowing or doing something. They sometimes prevent harm or illegality. But this is only half of the administrative “team.” The other half consists of those serving his personal agenda, and in this respect the federal government has become a subsidiary of Trump Incorporated.

William Barr is supposed to be this nation’s attorney general, whose job the Judiciary Act of 1789 defined as “to give his advice and opinion upon questions of law when required by the president of the United States.” But Barr has been bouncing all over the globe pushing the president’s self-serving conspiracy theories and smears of rival candidates, a stunning violation of his role.

Mike Pompeo, the secretary of state, took an oath to “support and defend the constitution of the United States against all enemies, foreign and domestic” and has since become one of those enemies in service of others. He was on the July phone call in which Trump asked the Ukrainian president to investigate Trump’s potential 2020 rival Joe Biden and discredit the story of the Russian intervention in the 2016 election. The leverage for this request seems to have been the hundreds of millions of dollars of foreign aid – taxpayer dollars – withheld by President Trump at the time.

The Guardian reported a few days ago that Pompeo “dismissed summonses from Democratic committee chairmen in the House of Representatives for five current and former state department officials to testify on the president’s attempts to push Ukraine to dig up dirt on his leading political rival.” And Tuesday, Pompeo’s State Department blocked former ambassador to the European Union Gordon Sondland, who’s implicated in the Ukrainian shakedown, from testifying to Congress, a clear and open obstruction of justice.

The phrase “party over country” has been used to describe Republicans for years, but at this point it’s more or less puppet over country, because the loyalty is to Trump’s corrupt, delusional, floundering endeavors to keep himself in power and out of trouble with the law. Trump’s own loyalties are to himself, his profits, and his next political campaign—and perhaps to Vladimir Putin, before whom he grovels regularly, and whose agenda he has served even with this undermining of our relationship with Ukraine and the search for evidence to exonerate Russia in the 2016 election.

Another unsurprising detail emerged in a recent New York Times story: “In Ukraine, where officials are wary of offending President Trump, four meandering cases that involve Mr Manafort, Mr Trump’s former campaign chairman, have been effectively frozen by Ukraine’s chief prosecutor. The cases are just too sensitive for a government deeply reliant on United States financial and military aid, and keenly aware of Mr Trump’s distaste for” special counsel Robert Mueller’s investigation “into possible collusion between Russia and his campaign.”

So at the top there’s corruption. But down below there’s dismantling and disarray. The Trump administration’s has a habit of firing or sidelining federal employees whose work is politically inconvenient. In 2017, Joel Clement, formerly head of policy analysis at the interior department, wrote about being taken away from his work on the impact of climate change on Native Alaskans and reassigned to “an unrelated job in the accounting office that collects royalty checks from fossil fuel companies.” There are numerous stories like his, of employees doing valuable work told to move across the country to keep their jobs, a maneuver that at best burdens them or renders them ineffectual, but often drives them out of their positions. The country is hemmorhaging people who provide oversight and keep key systems working.

The Federal Election Commission normally has six members and needs four to have a quorum; it is currently at three with no sign of a new appointment in sight. “Without the quorum,” the New York Times reports, “the FEC can’t investigate complaints, issue opinions, or fine violators.” I didn’t formerly think of myself as a big fan of rule of law, since those laws have always been applied harshly to the most vulnerable and most marginalized and were often written to embed racism, misogyny, and homophobia into law. But we now face something worse: the corruption and decay of rule of law in the service of billionaires and misogynistic white supremacists, a system in which the most powerful gain power and shed accountability.

We are entering a period of immense danger in which this self-serving president’s stupidity and ruthlessness could lead to almost anything—and I wrote that sentence before the feckless decision about Syria and Turkey. Congress will have to stand strong against whatever he unleashes. The fact that we may also have to rely on a supreme court with two appointments made by this illegitimate president is also alarming.

But we must not lose hope. In addition to the three branches of government, there is an unofficial fourth – civil society – which must exert itself. The will of the people is both what is at stake when a government becomes unaccountable and the force that can protect our embattled public interest. Passivity and disengagement got us here; political engagement will get us out.