The Trump Administration is arguing at the Supreme Court that employers should be able to fire LGBTQ workers. If religion can be used to deny workers rights as individuals, it can be used to upend the struggle for collective rights and dignity. 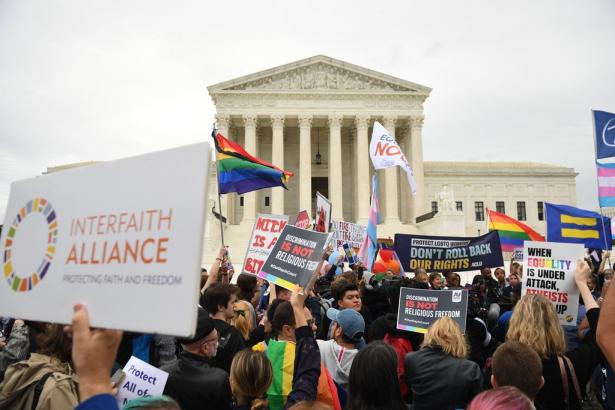 Demonstrators rally for LGBTQ rights outside the U.S. Supreme Court in Washington, D.C., on Oct. 8., Saul Loeb/AFP via Getty Images

On September 28, 1965, President Lyndon Johnson issued Executive Order 11246 directing the government “to provide equal opportunity in Federal employment for all qualified persons.” Not only would federal contractors not  “discriminate against any employee or applicant for employment because of race, creed, color, or national origin,” they would also “take affirmative action to ensure that applicants are employed, and that employees are treated during employment, without regard to their race, creed, color, or national origin.”

Freedom from workplace discrimination is essential for everyone. But for working-class employees, and particularly those who face discrimination on the basis of gender, race, and/or sexual orientation, the effects of discrimination are keenly felt. The Center for American Progress (CAP) estimates that it costs business more than $64 billion a year to lose and replace the more than 2 million workers who leave their jobs because of discrimination .

On August 15, the Labor Department released for public review an unprecedented new rule that expands the scope and application of religious exemptions that federal contractors can claim regarding their workforce. This proposed new rule undermines President Obama’s Executive Order 13672 (2014) protecting workers on the basis of sexual orientation and gender identity, which the CAP calls “the largest LGBTQ-inclusive expansion of workplace protections in American history.” In contrast, the new rule builds on President Bush’s Executive Order 13279 (2002) allowing faith-based and community organizations to prefer individuals of a particular religion when making employment decisions relevant to the work connected with its activities. In general, a religious exemption is an accommodation that allows those who claim one to avoid adhering to a regulation that applies to those who are not religious or do not participate in a particular religious tradition. Many religious exemptions are relatively non-controversial such as the one exempting religious institutions from property taxes. But this proposed exemption is very aggressive as it “covers not just churches but employers that are organized for a religious purpose, hold themselves out to the public as carrying out a religious purpose, and engage in exercise of religion consistent with, and in furtherance of, a religious purpose.”

Given that federal contractors employ approximately one-fifth of the entire U.S. labor force, the proposed expansion of contractors qualifying for a religious exemption could significantly alter workplace conditions that workers face on a daily basis. During a recent public comment period, organizations ranging from the ACLU, Human Rights Campaign, Lambda Legal, and the National Center for Transgender Equality to the American Bar Association have raised objections and have urged withdrawal of the new rule. Many fear it will tear down the legal barriers that prevent workplace discrimination — and do so using taxpayer dollars. For instance, an employer that claims to have a religious purpose could require that employees adhere to the same religion even if the work involved does not appear to have a religious aspect.  A construction company owned by an evangelical could require its bulldozer operators to be born again. Pregnant and unmarried workers could find themselves without a job if an employer’s religious beliefs prohibited sex outside of marriage. The public comment period for this proposed rule ended on September 16 and it could go into effect unless it is challenged in court.

Many raised concerns about religious exemptions in 2014, when the Supreme Court ruled that Hobby Lobby could deny employees health coverage for contraception because of the religious objections of the company’s owners. Exemptions that once only applied to non-profit religious organizations could now be claimed by corporations without overt religious purpose. This ruling was deeply problematic for workers who were either non-religious or had a different viewpoint on the relationship of religion and contraception. Some observers mistakenly assumed, despite their disagreement with the decision, that only closely-held family corporations such as Hobby Lobby would gain this freedom to discriminate against workers in this way. But, now, through this back door of a Department of Labor rule, a publicly held corporation acting as a federal contractor could engage in discrimination if it can “hold itself out to the public as carrying out a religious purpose” A corporation could simply affirm that it has a religious purpose in a response to an inquiry from the public or a government entity. For example, a  contractor could claim to have a religious purpose for something as secular as building roads and making a profit.

The new rule could also apply beyond federal contracts, as Ian Thompson, senior legislative counsel for the ACLU, notes was true for Executive Order 11246. Workers within a corporation were still protected by its provisions even if they were not specifically working on a federal contract. This new rule will be similarly expansive. That means the new rule could affect up to 25% of the private sector workforce.

Rather than addressing the concerns of religious organizations over federal contract regulations in narrow or specific terms, the Trump-led Department of Labor has adopted the most expansive approach possible to religious freedom protections and exemptions. The rule adds five new bases for religious exemption: “exercise of religion; particular religion; religious corporation, association, educational institution, or society; and sincere.” For instance, the exemption for “particular religion” allows contractors to prefer individuals who share their religion. They could also make acceptance of or adherence to specific religious tenets a condition of employment without sanction by the federal government. In sum, the “proposed rule should be construed to provide the broadest protection of religious exercise permitted by the Constitution and other laws.”

The proposed rule is an extraordinary concession to federal contractors that could use religion, however sincerely or insincerely, to discriminate against vulnerable workers in a precarious and uncertain economy. Working-class LGBTQ laborers are particularly vulnerable to this form of discrimination because of the lack of power that most working-class employees experience at the workplace anyway. Agnostic or atheist laborers could find themselves in the crosshairs of an aggressive manager or employer.

In addition, the proposed rule applies only to employers and not to workers. Freedom of speech has never been a priority for employers. If this new rule passes, will workers within corporations with federal contracts cease to have First Amendment protection for the free exercise of their own religion?

The proposed expansion of religious exemptions shows that the ongoing political fight over the meaning and application of religious freedom is not merely a religious matter. It has become clear that the 1st Amendment clause guaranteeing free exercise of religion can be twisted beyond recognition and then used as a bludgeon against the most vulnerable workers. A characteristic feature of working-class life is the constant struggle for power on the job and access to resources. The mere suggestion that an employer could also exert control over workers along religious lines as well is a chilling one indeed. The new rule might even allow religious justifications for an aggressive anti-union stance. If religion can be used to supersede the rights of workers as individuals, it can also be used to upend the struggle for collective rights and the quest for dignity and power on the job.