Builders of Israel’s Apartheid Walls Profit From US Border Militarization

A major Israeli weapons company has been named as one of the top profiteers of US border militarization. 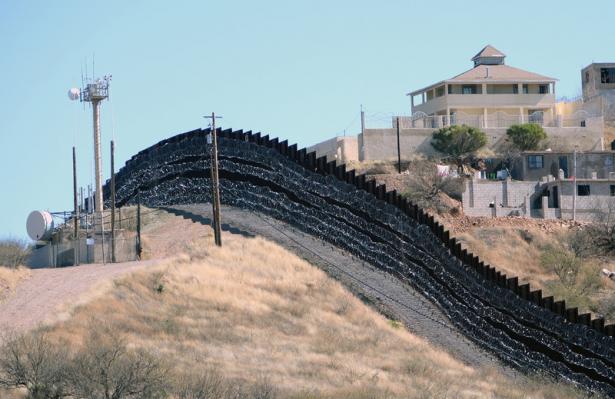 US militarization of the border with Mexico uses technology field-tested on Palestinians., Art Foxall/UPI

Elbit Systems has secured border contracts worth $187 million from the US government, according to research by journalist Todd Miller.

The largest, awarded during the Obama administration, is to build more than 50 surveillance towers near the US-Mexico border for the US government’s Customs and Border Protection (CBP) agency.

Ten of those towers will be on land belonging to the Indigenous Tohono O’odham Nation in Arizona.

A 2014 Bloomberg analysis predicted that Elbit’s initial profits could multiply if Congress authorized more funds to militarize the border.

Miller’s report – “More Than a Wall: Corporate Profiteering and the Militarization of US Borders” – was recently published by human rights research group the Transnational Institute, in collaboration with No More Deaths, a humanitarian organization which protects migrants along the southern US border.

The report profiles the top 14 companies profiteering from US border militarization, including Elbit.

In 2004, Elbit won a US government contract to supply Hermes drones for use along the border.

Israel “has ‘field tested’ those drones in attacks on Gaza which left many Palestinians dead, including children,” the UK charity War on Want stated in 2013.

Notably, Elbit “sells its experience of walling in the West Bank and Gaza,” the new report states.

Since Israel began constructing its wall around Jerusalem and elsewhere inside the occupied West Bank in 2002, Elbit and its subsidiaries have cashed in on contracts to install electronic surveillance technologies “designed to feed into [the Israeli army’s] command and control centers.”

The West Bank wall is illegal under international law and must be dismantled, according to a landmark 2004 ruling by the International Court of Justice.

In 2013, Elbit installed similar systems in the occupied Syrian Golan Heights in a contract worth $60 million.

Two years later, Elbit began developing “tunnel detection technology” for use around the besieged Gaza Strip, the report states. That technology would become part of a 130-foot deep underground wall that Israel began building in 2017.

When vying for the US-Mexico border contract Elbit advertised itself as having more than 10 years “securing the world’s most challenging borders” and that it had a “proven track record.”

Along with Elbit, war industry corporations including Raytheon, Lockheed Martin, Boeing, General Dynamics, G4S, IBM and Northrop Grumman have cashed in what the report describes as a “border-security bonanza.”

US border militarization contracts with such corporations added up to at least $80.5 billion between 2006 and 2018.

But this money is “certainly less than the true figures,” the report estimates, as the agencies issuing the contracts have consistently failed to be transparent.

Annual US border militarization budgets have more than doubled in the last 15 years and have increased by more than 6,000 percent since 1980, according to the report.

Some corporations contracted by CBP have committed significant ethical violations.

But repeated scandals involving some of the biggest border security corporations “have done little to slow down the revenue stream,” the report says.

G4S, the world’s largest security company and a major US contractor, has faced legal proceedings over the abuse and death of detainees in the US and UK.

Campaigners have successfully pressured institutions and governments to drop contracts with G4S due to human rights abuses.

These abuses include involvement with Israeli prisons where Palestinians are routinely tortured.

Corporations have lobbied US officials and made campaign contributions in an effort to expand CBP contracts.

Elbit, for instance, has funded Republican congresswomen Martha McSally of Arizona and Kay Granger of Texas.

McSally has used rhetoric demonizing people who are immigrants or who seek asylum.

She is a staunch supporter of the Trump administration’s harsh border policies.

And Granger is a ranking member of the House Appropriations Committee which allocates border militarization funding.

The report says it is time to expose how the firms that profit from cruelty and militarization at the border influence lawmakers.

“The constant push for more border walls, more technologies, more incarceration, more criminalization is in a holding pattern, stuck in a corporate dynamic with a growth doctrine,” it states.