labor Why I’m Voting No On UAW’s Deal With GM: A “Third-Tier” Worker

Although UAW leadership has encouraged the rank and file to ratify the contract, many workers are unhappy with the highlights of the proposed deal. 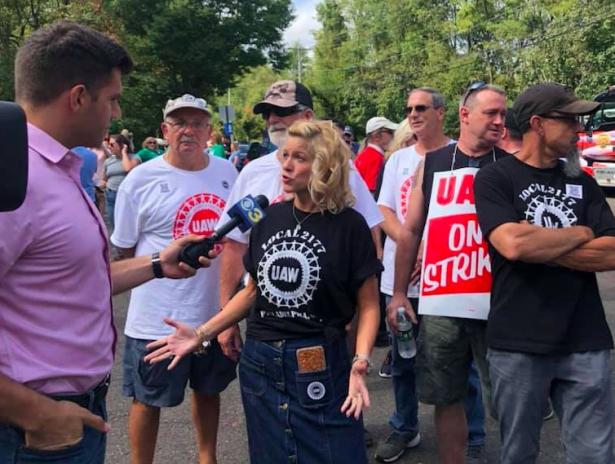 Raina Shoemaker, a General Motors employee and a UAW member, speaks to the press from the picket line.,

After 33 days on strike, the leadership at the United Automobile Workers (UAW) has negotiated a tentative agreement with General Motors (GM). Nearly 49,000 UAW members—concentrated mostly in the Midwest, with a few plants scattered in the South and Northeast—will stay out until their contract is ratified. And although union leadership has encouraged the rank and file to ratify the contract, many workers are unhappy with the highlights of the proposed deal. Numerous workers at the General Motors plant in Langhorne, Pennsylvania, tell In These Times that local union leaders are travelling to Buffalo, New York today, to read the full tentative agreement. Members have until October 25 to vote the contract in or to send the bargaining committee back to the table.

There are many important issues facing UAW members and leadership during this contract fight. The leadership is under a watchful eye by both its members and the media, thanks to multiple corruption scandals. But workers themselves are concerned about a myriad of issues: health insurance, giving temporary workers a path to become permanent, closing the gaps between different tiers of workers, and keeping GM plants in the United States. This tentative agreement does not appear to solve many of these problems—and, in fact, allows the closure of three plants.

In These Times spoke with Raina Shoemaker, a GM employee and a UAW member at a facility in Langhorne, Pennsylvania.

Mindy Isser: Tell me what you do, and how long you’ve been at General Motors.

Raina Shoemaker: I work in the GM Customer Care and Aftersales (CCA) facility, where we distribute parts to all of the different dealers. I’m in the Philadelphia one that’s on the East Coast. What I do is I pick parts, fill orders, and then they get shipped out. I’ve been at GM for four and a half years.

Mindy: What’s your reaction to the tentative agreement?

Raina: Well, the agreement doesn’t bring all of the temps onto immediate hiring stage: I would like to see temps become permanent with this new contract. If you’ve made your 90 days, you should be brought on permanent. That’s what we wanted with this contract. GM has increased some time off for temps, but not nearly enough, I don’t think. Because it’s such a physical job that we have, our bodies break down. So you need that time off, and we cherish that time off, because we need that time to rest our bodies. So I think it’s lousy for the temporary employees.

Raina: Under the new contract, in the manufacturing plants where they make the automobiles, they are all on the same payscale. For your first year, you’re paid $17 an hour. But four years later, you’ll be at $32.32. Everyone in the manufacturing plant gets to that maximum wage. In the GM Components Holdings plants, where they make certain parts, they are all on the same payscale, but that payscale is lower. You only max at $22.50 after eight years there, which I think is just wrong.

You can consider me tier three, which they call “in progression.” It takes me eight years to max out, and my max rate is $25. But we are in the same building, doing the exact same work. At these other buildings, they’re all in the same building, doing the same work, with the same pay scale. But not here. There are different pay scales that go all the way down to the temps, and if you take them all, there are four tiers. We’re still not considered one whole union, like we’re not all equal.

Mindy: Do you think your coworkers feel the same?

Raina: I think a lot of them do, yes. And you know, they’re not even bringing back any of the jobs from the facilities that they’re closing. Those plants are done. So we didn’t even get job security because of that. So I hope every one of those workers from Lordstown and some of the other plants, I hope every one of them says no to this contract. Because we’re going to need numbers.

The only plants that look really good right now are the manufacturing plants, some of the facilities that build the cars. They have a pretty good deal there. But the problem with that is they’re gonna all vote yes.

But GM, their future is to not manufacture anything in this country. They’re on their way to just take everything across the borders. And the only thing that will be left for GM in the future is the parts division that I’m in. Because you need to be able to get the parts to warehouses and then distribute them. But do I see manufacturing sticking around at all? Not the way that GM is going. They just want to keep throwing things into every other country, Mexico especially. They want to pay their people $3 an hour. They don’t care. An American company should really be an American company. And when you’re putting things everywhere else but America, then I don’t look at you as an American company anymore.

Raina: I’m totally concerned about the other members of the union. They’re families. GM is playing with their lives. They’ve broken down their bodies for 30-plus years, many people, for that company. And then GM turns around and doesn’t care. GM just looks the other way. People need these jobs! This country is going in the wrong direction, it’s not even funny. And it’s not just GM, it’s other big corporations. They’re just leaving. They don’t even care. The middle class is just getting smaller and smaller and smaller. And poverty is just getting worse.

Mindy: Do you think this contract will be ratified?

Raina: I hope not. But I don’t know the numbers. Anyone in a CCA I think will vote no. Any of the manufacturing plants that are closing, I think they’re all going to vote no. I don’t know if we got the numbers. I hope we do vote no. Because this is a lousy contract.

Mindy: What were your hopes for this contract?

Raina: Considering I’m in the third tier, my hopes were to at least be brought up to the second tier. That was my hope: to bring people more equal. More as one, the whole union. And it’s just not. They did a little bit better for the temps, I’m not gonna say that they didn’t. But did I think they did enough? For everything that we’ve done, being out there for five weeks? No. They shouldn’t even have brought this to the table, to be honest with you. I think it’s an insult. I do.

Mindy: What are the next steps for the union?

Mindy: Any big takeaways from this strike?

Raina: My big takeaway is what we feel amongst each other: the unity. But we don’t feel the unity from the higher up union officials. I just feel like they’re not fighting enough. I don’t know what the other side is saying. I’m not in that room with General Motors. They’ve got multi billions of dollars, so are they willing to lose another 2 billion? Probably, because it’s like chump change to them, they can do it. They’ve got that much money. And do they care that they hurt us as we sit on that picket line? No, they really don’t.

And obviously they don’t care too much about their dealerships, because the dealers are really hurting at this point. And that’s their customer. I don’t get it.

Mindy: Is this your first strike? What did you think about going out on strike for the first time? Did you have any fears about it?

Raina: I didn’t have any fears about it. I thought it was definitely about time, because I know what we endure every day in that facility. I know how bad our bodies break down. I know that we deserve to be paid for. Especially the ones that are in the tier that I’m in. I know we needed to keep our health care good. A lot of us get hurt. We’re constantly twisting, bending, turning, walking 8 to 10 miles a day on a floor that’s stronger than concrete. It really breaks your body down. I really think that this was time. Because they don’t see it.

Mindy: Back to the big takeaways from the strike, a lot has been written about community support. Do you think it’s helped keep morale high?

Raina: We’ve gotten huge community support that we are so thankful for, especially from Democratic Socialists of America (DSA), which you know a lot about. Unbelievable. Our hearts are so warmed from the community and all the other unions and DSA. We can’t say enough: thank you. I wish we could do other than just say thank you. It’s just overwhelming. And everybody feels the same way, we all talk about it. That’s one of our main things: We can’t believe the support we’ve gotten. Everyone is supporting us except GM.

Mindy: Why do you think everyone is supporting you so much?

Raina: Because I think we have so many middle class, hard-working people that feel like they’re being treated unfairly in their own jobs, whether it’s union workers or non-union workers. They just feel that it’s getting so hard out there, and the owners of these companies, and the greed—it’s just so big in today’s time. They don’t care. People just don’t care. All they care about is money.

Raina: I’m going to give final thoughts to anyone who feels like they’re being treated unfairly at work. They need to fight for themselves. Whatever it takes.

Mindy Isser works in the labor movement and lives in Philadelphia.