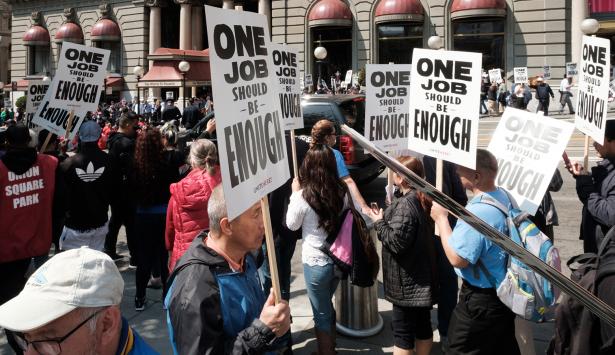 Houston Mayor Sylvester Turner signed an executive order raising the minimum wage to $12 an hour by 2021 for 8,000 people at the city’s two airports. That’s a 65% increase for workers paid the federal minimum of $7.25 an hour. About 8,000 baggage handlers, caterers, wheelchair attendants and others benefit.

The federal minimum wage is worth only $6.10 an hour when adjusted for inflation since 2009 when the $7.25 floor was established.

That a local government in Texas is raising wages for mostly minority workers shows how organized efforts can win improved pay despite how Trump has turned the Labor Department into “the Department of Management Rights,”as Los Angeles Times business columnist Michael Hiltzik put it.

Workers at Houston’s Bush airport suffer in a low-wage no-rights, no-benefits hell with the financial fires fueled by a vicious contracting-out scheme. It’s a perfect example of how the Trump administration’s misclassification of millions of “gig economy” employees as independent contractors hurts workers.

United Airlines dominates at Houston Intercontinental and Hobby Airports. Linda Alexander, who guards an escalator, was demoted for trying to tell United about the horrendous working conditions. She wants travelers to know that United Airlines is their real employer because it “actually pays our salaries through ABM,” the Houston airports contracting firm.

A recent survey of contracted-out skycaps, wheelchair attendants and cabin cleaners found 43 percent mired at the rock-bottom federal minimum wage of $7.25 an hour and 96 percent making under $11 an hour.

That’s less than Texas United Way’s “survival budget” for a single adult. It’s far beneath the charity’s $24-an-hour survival standard for a family with two kids. And its less than half the minimum pay at airports in Chicago, Denver, Los Angeles and metropolitan New York.

“The contracting-out started earlier, but it has accelerated under Trump, the most anti-worker president we have ever had,” said Rocio Saenz, executive vice president of the Service Employees International Union. “In the Trump years we have seen a vast shift of power to corporations and CEOs, who have rigged this system against the workers.”

“The contract workers get lower pay for longer hours as the airlines dodge their responsibility for the employees who make their businesses run and bring in their profits,” said Saenz. The CEOs of United, Delta and American airlines each took home more than $10 million last year.

“The majority of the contract workers are people of color and immigrants — the ones Trump scapegoats while he helps corporations and the rich,” Saenz said. He came from Mexico, worked as a low-paid janitor and became an SEIU organizer.

Contracting out labor and then classifying employees as contractors causes economic pain far beyond airports. About 57 million Americans do jobs like driving for Uber and Lyft, delivering groceries for Instacart and Doordash and cleaning houses for Task Rabbit and Handy.

Said Kyle Bragg, who heads SEIU Local 32BJ: “The airlines have turned well-paid union jobs over to contractors and made them into poverty jobs.”

The 2017 Trump/Radical Republican tax law also “gave business incentives for outsourcing, and the sub-contracting serves as a roadblock to organizing,” said Steven Kreisberg, research director for the American Federation of State, County and Municipal Employees. AFSCME represents airport workers in Miami, St. Louis and other cities.

Contracting out goes hand-in-hand with the parallel policy of making gig workers self-employed independent contractors instead of employees, as announced earlier this year by the federal Labor Department and the Trump-dominated National Labor Relations Board.

“Both help business intensify exploitation” of workers, Kreisberg said, “especially of immigrants and minorities, who have less opportunity elsewhere.”

Close to 97% of baggage handler and transportation attendant jobs are now outsourced nationwide, according to the federal Bureau of Labor Statistics.

Winning in “Right to Work” states

Instead of being employees with some protections and benefits, these workers are classified as independent contractors, which means they possess no right to minimum wages, overtime, workers’ comp, unions or even their jobs. As independent contractors they can be kicked out of work for no reason and may not be eligible for jobless benefits.

Organizing is hard in states like Texas which call themselves “right-to-work” states. That term really means the right to work for less because the law is strongly anti-collective action.

“Houston is one of the last major hubs where the workers are organizing to hold the airlines accountable.” explained Elsa Caballero, the SEIU Texas president and an immigrant from Honduras. “United [Airlines] took advantage of the opportunity to raise its profits by giving good union jobs to the lowest-bidding sub-contractors, and the workers are suffering.”

Teresa McClatchie’s job is in airport security. She makes sure no one slips through the gates at Bush Intercontinental Airport without a ticket. But she doesn’t work for United. Her employer is actually a sub-contractor, ABM.

“It sucks to the max!” said McClatchie. “On $9 an hour, I can barely feed myself and help my granddaughter a little with college.”

The lack of labor rights became evident when her neck was severely injured in a car crash and surgeons implanted a metal plate. On a Friday McClatchie asked on for a week off to recuperate.

“If you’re not here on Monday, you won’t have a job,” management answered.

No other nation with a modern economy allows such thoughtless cruelty. We say thoughtless because without time to recover properly an injury can worsen, result in a relapse with further damage and perhaps lifelong disability, turning a productive worker into a person dependent on taxpayers.

According to Leslie Kamstra of Airport Workers United, an arm of the 1.9 million member SEIU, some women workers at the airport wear adult diapers at work because they are denied restroom breaks in the cause of fattening the bottom line for the company owners.

“My four years of work for them didn’t mean a thing,” McClatchie said. “There should be respect for our hard work, but we’re under constant surveillance, and when I’m working by myself, no bathroom breaks are allowed. I could be charged with abandoning my post, but no boss can make me soil myself.”

McClatchie’s work week was cut to four days for speaking out about the workers’ plight.

“They will probably retaliate against me for talking to you about this,” she told DCReport. A religious woman, she prays for her co-workers and even for the bosses who have cursed her.

McClathcie said she can’t afford to purchase medical benefits. “My health insurance is praying not to get sick,” she said.

McClatchie and Alexander are among the Houston airport workers still fighting to build a union and raise their meager pay even more. “ABM doesn’t seem to understand compassion, but with a union we would be one strong voice together and they would have to listen and treat us with some humanity,” said McClatchie.

The unionists are optimistic. Pushing politically and in contract negotiations, nearly 120,000 cabin and terminal cleaners, baggage handlers, security workers and skycaps across the country have won wage and other improvements in recent years. About 30,000 have won union rights with SEIU.

Caballero, an SEIU official in Texas, has organized demonstrations and political pressure for more responsible contractors and higher wages at the airport, which is controlled by the city.

Houston Mayor Sylvester Turner, a Democrat, met with the union, including rank-and-file workers like Linda Alexander. “He listened carefully and committed publicly to work for a solution,” said Caballero, “but we aren’t just relying on the goodwill of whoever is in office. We are organizing to give a voice at the table to people who haven’t been heard. Only the union can do that.”

“Trump’s attacks have only made us stronger and more united as a growing wave of underpaid workers are joining the union across race and place to fight for $15 an hour and union rights to make the economy work for everyone, not just the few Trump favors at the top,” said Saenz.