Americans are aging, and millions will be unable to afford long-term care. The only way to avert social catastrophe is to implement a Medicare-for-All system with comprehensive long-term care benefits. 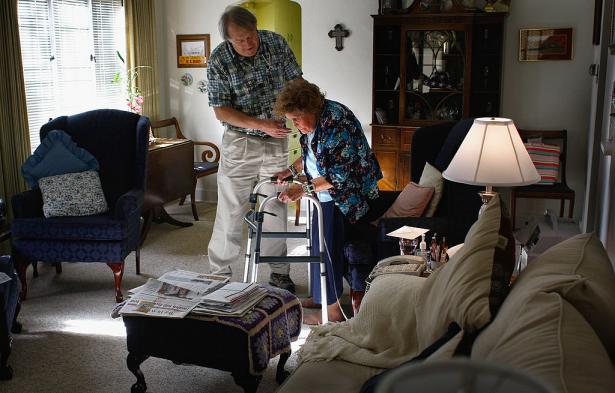 By 2050, one in five US residents will be of retirement age. As we hurtle headlong toward this reality, we face a choice: we can either invest public money in comprehensive long-term care for seniors, or not.

If we don’t, the consequences will be grim. The average annual cost for a home health aide tops $50,000. The annual cost of a private nursing home room now exceeds $100,000, and it’s rising. At present, Medicare does not cover most long-term care needs; seniors often find that their best option is to deplete their life savings so they can qualify for Medicaid. But even then, benefits are limited, and the costs of home health aides and institutional care are not fully covered. Private insurance that covers long-term care is too expensive for many seniors, leaving them at the whim of the threadbare social safety net.

Over the next decade, ten thousand baby boomers a day will turn sixty-five. Most of these people will need some kind of long-term care at some point. That means that tens of millions of people will soon be left to their own devices as they scramble to secure arrangements for themselves. Tens of millions more will be on the hook for figuring out how to care for them, or how to pay for somebody else to care for them. Baby boomers and their children will soon become preoccupied with the question of long-term care provision — and if we proceed apace, the system will prove impossibly expensive, endlessly difficult to navigate, and ultimately inadequate for nearly half the population.

The only way to forestall a national crisis is to intervene now. Luckily, we have an opportunity to do that. Two Medicare for All bills, one introduced in the Senate by Bernie Sanders and another introduced in the House of Representatives by Pramila Jayapal, include generous long-term care benefits. If we create a national single-payer program that comprehensively covers long-term care, we will be prepared to handle the aging of our nation’s population. If we don’t, social chaos awaits.

Because Medicare for All is a universal single-payer program, long-term care benefits would be open to anyone who struggles to look after themselves, including both seniors and people of any age with disabilities. Eighty percent of people who currently receive some type of long-term care live in private homes. The bills stipulate that anyone who experiences difficulty performing daily tasks due to injury, illness, or age would qualify for complete coverage of home- and community-based care, regardless of their income. This includes everything from a fully paid home health aide to necessary home improvements to make daily life easier and allow people to stay in their homes and communities longer.

Jayapal’s bill stipulates that the program will also cover the cost of residence in a skilled nursing facility, while Sanders’s leaves institutional care costs up to Medicaid. In this regard, Jayapal’s bill is stronger. But in both instances, a picture emerges of a social insurance policy — one we all pay into according to our ability, and qualify to benefit from according to our need.

At present, the Congressional Budget Office estimates that the majority of long-term care is supplied in private homes by informal caregivers, mainly family members who donate their time and energy to look after loved ones. The majority of these unpaid caregivers are women; adult daughters provide twice as much care for aging parents as sons do. In both Sanders and Jayapal’s visions, Medicare for All would formalize those services, rendering them universally reliable and adequately compensating providers.

This would have three major benefits. First, everyone would have access to the care they need, not just those who are fortunate enough to have a willing and available family member nearby. Second, informal carers would receive necessary relief, allowing them to live their own lives with the knowledge that their loved ones are getting the care they need. (This has strong feminist implications, since adult women bear the brunt of informal care work.) And third, formalizing long-term care would create millions of new jobs, easing unemployment and stimulating the economy overall.

Those who claim this idea is unaffordable are missing the forest for the trees. Collecting funds through progressive taxation to pay for long-term care for seniors and people with disabilities is far more affordable in the long run, for both individuals and society as a whole, than leaving a huge swath of the population in the lurch. The only people for whom it’s genuinely less affordable are the private interests who make a killing, so to speak, off the current arrangement — companies that rake in huge amounts of money from desperate people willing to pay any price, down to their last penny, to ensure survival for themselves and their loved ones.

In March of 2017, the Wall Street real-estate giant Blackstone acquired sixty-four senior housing communities for just over a billion dollars. They and other profit-hungry companies that comprise the lucrative long-term care industry intend to receive a hefty return on their investment, regardless of the human cost. We can either let them own the future of aging, or we can own it for ourselves.

The new issue of Jacobin is out now. Purchase a special discounted subscription today.