How Much of a Difference Does the Number of Kids in a Classroom Make?

I’ve studied how schools can boost student achievement for more than two decades and I’ve found that smaller classes are better for students. This is especially the case in the early grades and for students from low-income families.

November 3, 2019 Diane Whitmore Schanzenbach The Conversation
Printer friendly
How Much of a Difference Does the Number of Kids in a Classroom Make? Published November 3, 2019 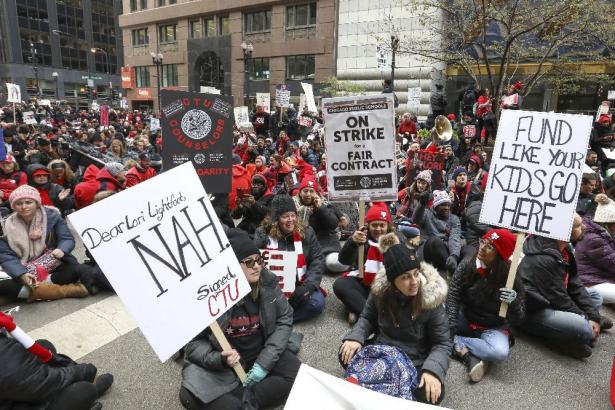 Chicago’s teachers say they are seeking a better deal for their students too.,AP Photo/Teresa Crawford

Educators in the nation’s third-largest school district were seeking higher pay and improved benefits. But they also wanted to reduce the number of classrooms with large numbers of students.

The deal the union representing Chicago’s teachers struck with the city calls for enforcing limits on class size that are in place but not always heeded. It also commits the authorities to spend US$35 million a year to cover the cost of hiring more teacher’s aides to relieve teachers responsible for 32 or more kids in kindergarten through third grade.

Such a change would require more teachers.

Would it also make a difference for kids?

I’ve studied how schools can boost student achievement for more than two decades and I’ve found that smaller classes are better for students. This is especially the case in the early grades and for students from low-income families.

Unfortunately, though, it is impossible to say what class size between 15 and 40 is ideal. However, the evidence suggests that every decline in class size within this range leads to kids learning more.

Total spending, class size and teacher quality are important. So is a school’s culture, including how school staff work together and learn from each other, and how they respond to student needs. The characteristics of a student’s classmates matter, as does the fit between the student and her teacher.

A randomized study conducted by researcher Helen Pate Bain and her colleagues in Tennessee in the mid-1980s, called Project STAR, provided the strongest evidence to date that children learn more when they are in smaller classes.

The researchers randomly assigned nearly 12,000 students and their teachers in kindergarten through third grade in 79 schools to classes with 13-17 students or 22-25 students.

The results were clear: students in the smaller classes performed significantly better on math and reading tests, with a gain of 4 percentile points or more. The benefits of smaller classes were even larger in schools with low-income students.

More recent research indicates that the benefits of being taught in smaller classes persist long after students have moved on to the next grade. They become more likely to complete high school and go to college and less likely to end up becoming parents in their teens, to name some of the most compelling examples.

Many other researchers who have studied the impact of smaller classes in Wisconsin, Sweden and Israel have found similar connections.

But the evidence is not entirely clear cut. Although most research points to students faring better when they’re taught in small classes, some studies have not found any benefits.

And there’s a big gap in this research. Most studies have looked into how class size affects learning in elementary school, providing little insight when administrators and policymakers make decisions about class sizes for middle and high school students. 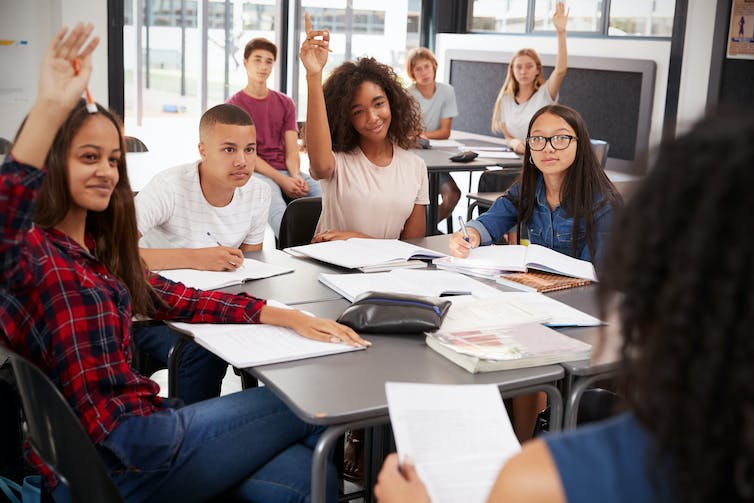 With 30 students or more in a class, it’s hard for everyone to get their turn. Monkey Business Images/Shutterstock.com

In theory, at least 19 state governments have imposed class-size mandates based on classroom averages, and another 10 have binding ones that require schools or districts to maintain a set average.

In reality, these rules vary widely in terms of funding, enforcement and how the authorities measure class size.

For example, in theory, Texas has a maximum class size of 22 for kindergarten through fourth grade, but waivers that allow classes to have larger numbers of students are easy to obtain. Delaware requires a ratio of 22 students per teacher, but it counts classroom instructional aides as half a teacher.

Reducing the number of students in each classroom requires employing more teachers, which in turn, means spending more money on salaries and benefits. In some cases, the additional teachers hired may not be as effective as those already in the building. Strictly limiting class size can also drive up school construction costs when there aren’t enough classrooms to accommodate students being split into more groups.

It’s also impossible to maintain consistent sizes in classes, especially in the early grades, since elementary schools tend to be relatively smaller.

Taking that step instead of splitting them into two classrooms of 24 students and another with 25 could require hiring a new teacher. School administrators might argue in this situation – correctly – that one additional student would not make much of a difference in terms of what those second-graders would be learning that year. At the same time, those students could wind up benefiting from having fewer classmates.

My example assumes that an additional classroom is available, and an additional qualified teacher can be hired. That’s not always the case.

California enacted a voluntary class-size reduction program in 1996 that dramatically reduced class sizes in kindergarten through third grade statewide. To adhere to the new rules capping those classes at 20 students, schools had to hire 30,000 new teachers.

Many of those new hires lacked experience and standard teaching credentials. Kids, at least initially, didn’t gain as much as expected from being in smaller classes because some of new teachers weren’t as good as the ones hired before the rules changed.

And because there weren’t enough classrooms to accommodate them, many schools made do with the portable structures sometimes called “relocatables” or trailers.

California rolled back this requirement during the Great Recession. By 2012, many schools had 30 or more children in a classroom. Wyoming, likewise, has pared back its ambitious goal of having no more than 16 children in its kindergarten through third-grade classrooms to save money.

Without question, class size matters. But when faced with constraints such as building sizes and tight budgets, the choice to reduce class size can be hard to sustain.

[ You’re smart and curious about the world. So are The Conversation’s authors and editors. You can get our highlights each weekend.. ]