Israel Destroyed Record Number of Palestinian Homes in Jerusalem in 2019

Israel has demolished a record number of homes in occupied East Jerusalem in 2019, the most in the past 15 years, Israeli rights group B’Tselem reported on Thursday. 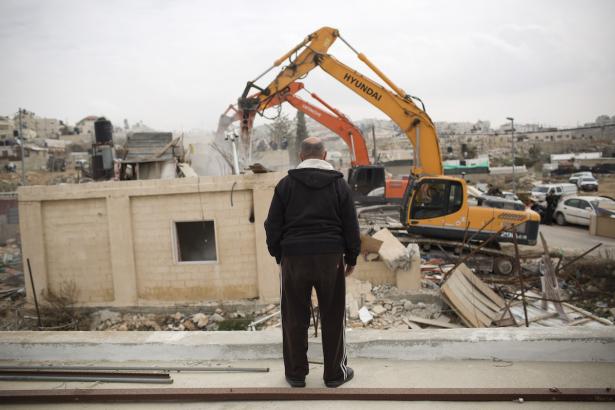 Palestinian man watching his house being demolished by Israeli authorities in East Jerusalem on January 27, 2014. , Activestills
More than 140 Palestinian homes were demolished, resulting in the displacement of 238 Palestinians, 127 of them minors.

Of the homes that were destroyed, 39 were destroyed by the owners themselves after they received demolition orders from Israel, in order to avoid incurring the municipality’s demolition fees.

This year’s demolitions far surpassed the second highest number of demolitions, which occurred in 2016 when 92 homes were destroyed.

Since B’Tselem began recording home demolitions in East Jerusalem in 2004, Israel has destroyed a total of 949 homes, displacing more than 3,000 Palestinians.

Following the Israeli occupation of East Jerusalem and the West Bank in 1967, Israel illegally annexed some 70,000 dunums of Palestinian land and extended the boundaries of the Jerusalem municipality to dozens of Palestinian neighborhoods.

There are some 350,000 Palestinians living in East Jerusalem. Following the occupation of the city, they were given “permanent residency” status, compared to Jewish residents of the city who have full citizenship.

Despite the fact that Palestinians make up 40% of Jerusalem’s population, Israel’s Jerusalem Municipality has zoned only 15% of the land in East Jerusalem for residential use.

In addition to discriminatory zoning laws, Israel makes it extremely difficult for Palestinians to obtain building permits through lengthy application processes that costs tens of thousands of dollars — an impossible feat for Palestinian families in the city, many of whom live below the poverty line.

According to UN documentation, at least a third of all Palestinian homes in East Jerusalem lack an Israeli-issued building permit, placing over 100,000 Palestinians at risk of displacement.

In addition to navigating Israel’s permit regime, Palestinians in East Jerusalem struggle to hold onto their homes in the face of Israel’s rapidly growing settler movement in the city.

With the support of the state, Israeli settler organizations have taken control of dozens of properties within Palestinian neighborhoods in East Jerusalem, and have launched lengthy legal battles against Palestinian families in efforts to evict them from their homes.

Settlement watchdog Peace Now released data last month showing that of 57,737 housing units approved in construction permits in Jerusalem from 1991 – 2018, only 16.5% (9,536 units) were approved for construction in Palestinian neighborhoods.

In contrast, 37.8% (21,834 units) of the approved applications were for construction in Israeli settlement neighborhoods in East Jerusalem.

The group also noted a “drastic increase” in settlement construction in East Jerusalem following the elections of US President Donald Trump, with permit approvals in settlement neighborhoods up 58% in 2017-2018 compared to the two years before he came into office.

Yumna Patel is the Palestine correspondent for Mondoweiss.