Donald Trump still holds immeasurable power, and only a fool would underestimate him at this point, because cornered animals can be lethal. Yet if Virginia, Pennsylvania and Kentucky are any indication, they are but a harbinger of what is to come. 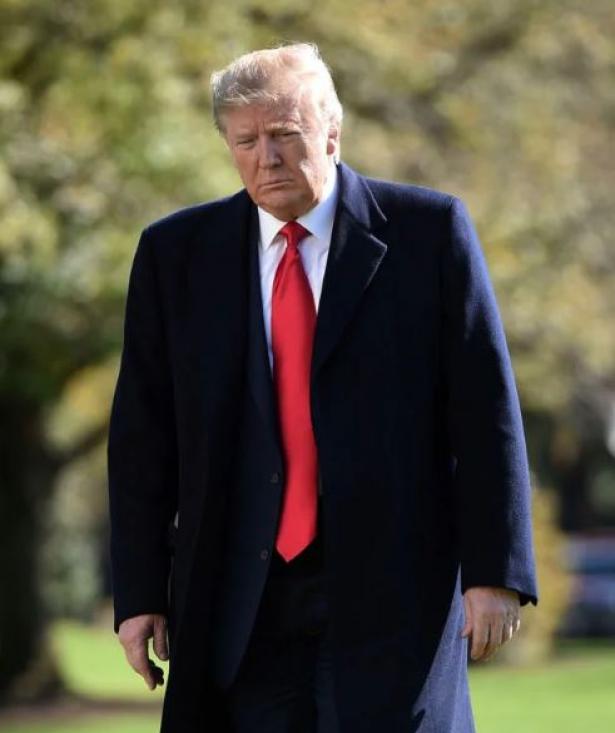 President Trump walks on the South Lawn upon his return to the White House in Washington, D.C., on November 3, 2019., Olivier Douliery / AFP via Getty Images // Truthout

A single mother of two flips her middle finger at Donald Trump’s motorcade while riding her bike in Loudoun County, Virginia, and the moment is captured in a photo that goes viral on social media. The woman is fired from her job for “violating” the company’s social media policies.

She sues her former employer and wins a severance claim, and two years after that bird flew, she defeats a Republican to win a seat on the Loudoun County Board of Supervisors. Loudoun County is home to National Golf Club, a Trump property. Odds are he was either on his way there or had just left when she tossed him the long-finger salute.

Pitch that script to a Hollywood producer and you’d be laughed out of the room. For Juli Briskman, wielder of the famous digit, it is a reality, one chapter in a still-unspooling story titled Trump’s Superbad Tuesday. “Isn’t that sweet justice?” she asked a Washington Post reporter.

Indeed. Briskman’s victory was an accent in the symphony of defeat endured by the Virginia Republican Party on Tuesday night. Democrats ran the state legislative table, taking majority control in both houses for the first time since 1994. The evening’s aftermath left elected Virginia Republicans almost as endangered as the rare Dismal Swamp Shrew, a tiny creature who lives in bogs and dines on worms.

“With Democrats already controlling the governor’s mansion, the state’s two U.S. Senate seats, and a majority of its congressional seats,” reports The Washington Post, “[Virginia] Republicans are bracing for policy changes in Richmond and the specter of Democrats redrawing legislative districts after the 2020 Census that could undermine GOP incumbents from the state house to Congress.”

The nationwide suburban revolt against Trump continued apace in Pennsylvania on Tuesday. For the first time since the Civil War, Democrats took all five seats on the Delaware County Council. Democrats likewise assumed majority control over Chester County, and won the Bucks County Board of Commissioners, which Republicans have owned since 1983.

More bad news for Republicans traveled west with the sun on Tuesday, casting bleak shadows across the residence of Kentucky’s GOP Gov. Matt Bevin, who was defeated by Democratic challenger Andy Beshear. Bevin, one of the more truculent varieties of Trump sycophant, stapled himself to the White House by trying to make his re-election campaign a referendum on impeachment. His efforts did not yield fruit.

Mindful of the bellwether nature of the Kentucky governor’s race — happening as it was in the home state of Majority Leader Mitch McConnell, his most vital Senate ally — Trump traveled to Lexington the day before the vote to implore his followers to go to the polls.

“If you lose,” Trump implored the crowd with hands lifted in supplication, “it sends a really bad message, just sends a bad, and they will build it up. Here’s the story: If you win, they’re gonna make it like ‘ho-hum,’ and if you lose, they’re going to say ‘Trump suffered the greatest defeat in the history of the world. This was the greatest.’ You can’t let that happen to me!”

The evening’s aftermath left elected Virginia Republicans almost as endangered as the rare Dismal Swamp Shrew, a tiny creature who lives in bogs and dines on worms.

It is beyond dispute that Donald Trump will remember this past fifth of November for a long time, and not just because of the doings at the ballot box.

“If you’re looking for a circumstance where the president of the United States was threatening the Ukraine with cutting off aid unless they investigated his political opponent, you’d be very disappointed,” said Sen. Lindsey Graham back on September 25. “That does not exist.”

Apparently, someone forgot to tell that to EU Ambassador Gordon Sondland, who nearly tore an Achilles tendon trying to outrun a conspiracy/perjury rap on Tuesday.

Sondland’s previous House testimony – in which he claimed he was unaware of any quid pro quo demands put to Ukraine during Trump’s efforts to dig dirt on Democrats — performed an abruptly aerobic pivot on Tuesday. All of a sudden, he totally remembered Trump putting the exact aid-for-investigation requirements to the Ukrainian government after a half-dozen other witnesses put the bricks to his prior self-serving statements.

“I now recall speaking individually with [top Ukrainian national security adviser Andriy] Yermak, where I said that resumption of U.S. aid would likely not occur until Ukraine provided the public anti-corruption statement that we had been discussing for many weeks,” said Sondland in his updated testimony.

Beyond the stark fact that Sondland’s refreshed memory has further buttressed evidence of rampant illegal activities by Trump, the bit about “discussing for many weeks” stands out. Trump and his allies have been peddling a “Read the transcript” argument against the rising impeachment tide, attempting to claim that the edited transcript of the July 25 call between Trump and Ukraine President Volodymyr Zelensky contains no visible wrongdoing. It does, but Sondland’s “many weeks” comment further underscores the fact that efforts to strong-arm Ukraine into interfering with the U.S. presidential election went far beyond a single phone call.

Republican efforts to batten down the hatches have begun to reek of desperation.

The Trump playbook for hostile witnesses to date has been to paint them as “Never Trumpers” with a political agenda. That’s going to be a hard case to make against Sondland, who donated a cool million dollars to Trump’s inauguration committee and was repaid with the EU ambassadorship. That hasn’t kept some Republican lawmakers from lashing out at Sondland by calling him “a lackey, a chest-thumper and a rube.” Enjoy those bus wheels, Gordy. I suspect you will soon have company.

Republican efforts to batten down the hatches have begun to reek of desperation. “The Republican National Committee paid to generate thousands of calls to the congressional offices of nearly three dozen House Democrats in recent weeks,” reported The New York Times on Monday, “an effort that was aimed at both shaping opinion around the impeachment inquiry and tying up the phone lines of the elected officials.”

Simultaneously, flailing GOP senators are debating whether or not to try and drag Hunter Biden into the public impeachment hearings — which begin in one week — in order to distract the public from the ongoing car accident that is the Trump administration.

This course of action is being championed by Sen. Rand Paul, who also wants to expose the name of the whistleblower who got the impeachment ball rolling in the first place. Not every Republican is on board with this ploy, however; Sen. John Cornyn called Paul’s idea a “sideshow,” and others privately fretted such a move would backfire.

Meanwhile, Trump himself — in the background, foreground and everywhere in between — intends to keep trying to lie his way out of this impeachment predicament. Put simply, the man does not know how to do anything else, and he does not care a whit for the damage he will do to the party he so thoroughly conquered in 2016.

Donald Trump still holds immeasurable power, and only a fool would underestimate him at this point, because cornered animals can be lethal. Yet if Virginia, Pennsylvania and Matt Bevin’s Kentucky are any indication, and if Gordon Sondland represents the first pebbles of an impeachment avalanche, the bruises raised on Tuesday are but a harbinger of what is to come.

The greatest defeat in the history of the world? Certainly not … yet.

[William Rivers Pitt is a senior editor and lead columnist at Truthout. He is also a New York Times and internationally bestselling author of three books: War on Iraq: What Team Bush Doesn’t Want You to Know, The Greatest Sedition Is Silence and House of Ill Repute: Reflections on War, Lies, and America’s Ravaged Reputation. His fourth book, The Mass Destruction of Iraq: Why It Is Happening, and Who Is Responsible, co-written with Dahr Jamail, is available now on Amazon. He lives and works in New Hampshire.]