The biggest city in the US is joining a voting reform movement. 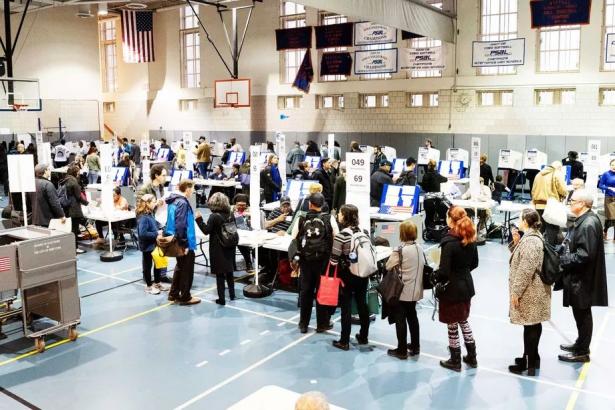 Voters on the Upper West Side in New York City on November 6, 2018. A ballot measure will give New York City residents a chance to institute ranked choice voting in primaries and special elections., Michael Brochstein/SOPA Images/LightRocket via Getty Images

New York City has become the latest — and most populous — city to adopt ranked-choice voting, a major milestone for voting reform efforts.

New York City joins 20 other cities around the country, as well as multiple states, that have already started using this method in various elections. Maine, notably, implemented ranked-choice voting for the first time in a federal election in 2018.

Ranked-choice voting works much like its name suggests. Instead of picking just one candidate on the ballot, voters rank their top five in order of preference.

Once those votes are cast, they are counted in the following way, Lee Drutman explains:

But if no candidate has a majority in the first round, the candidate in last place is eliminated. Voters who had ranked that candidate first have their votes transferred to the candidate they ranked second. This process continues until a single candidate gathers a majority.

Advocates of ranked-choice voting argue that it has many benefits. Because candidates need broad-based support to win, they are forced to engage with a wide range of voters, including groups that do not always see outreach from political campaigns. Additionally, studies have found that ranked-choice voting increases the number of minority and women candidates who vie for elected office, partly because ranked-choice campaigning is less negative.

In addition to shifting the nature of campaigns, ranked-choice voting also gives voters more freedom to consider the full slate of candidates. Because of the way that votes are tallied, an individual could feel free to pick their favorite option without worrying that in doing so they are acting as a “spoiler” who contributes to the victory of an unfavorable or unpopular candidate.

Opponents of ranked-choice voting argue that it complicates the process too much, both when it comes to voting and tabulating results.

Overall, New York City’s decision to adopt the ballot measure — though it will only affect a specific set of races — will serve as a good test case for ranked-choice voting, and it signals growing momentum for this voting reform.

Li Zhou is a Politics and Policy Reporter for Vox