The Trump Administration Is Undercutting Democracy in Bolivia

Will the US and the Organization of American States once again be able to overturn election results? 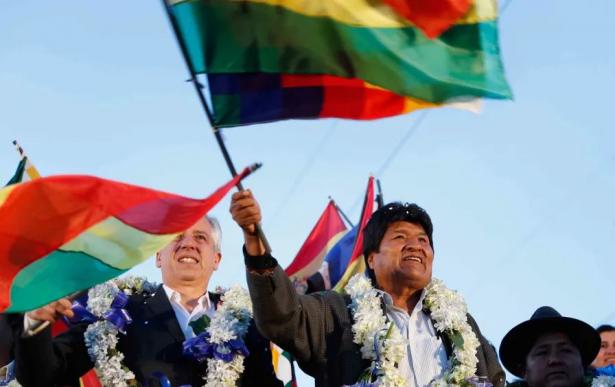 Multilateral organizations like the Organization of American States (OAS) have a certain perceived impartiality because they are, in theory, controlled by a diverse group of nations. But sometimes a great power can wield a disproportionate influence. It could theoretically be a coincidence that both the Trump administration and the OAS have tried—without offering any evidence—to discredit Bolivia’s national election in the past couple of weeks. But it’s more likely that this dangerous, ugly, and destabilizing operation is being pushed by Washington.

On October 20, Bolivians went to the polls to choose their president and congress. Evo Morales, the country’s first indigenous president in a country with the largest proportion of indigenous people in Latin America, was on the ballot for reelection. His main opponent, former president Carlos Mesa, is vastly preferred by the Trump administration. Since Morales was elected in 2005, the US government has been hostile, and Bolivia has not had ambassadorial relations with the United States since 2009. Morales is one of the last remaining members of a cohort of independent, left presidents who have been opposed, and in some cases removed with the help of, the United States.

When the official tally was done, Morales had 47.1 percent of the vote, with 36.5 percent for Mesa in second place. This meant that Morales had won the presidency without going to a runoff, because the rules allow for a first-round win for a candidate that gets at least 40 percent of the vote and a 10-point margin over the closest competitor.

The opposition cried foul. Long before the votes were counted, Mesa had already indicated he would not accept the decision of the electoral authorities if Morales were to win. What is more surprising, and disturbing, was the press statement from the OAS the day after the election. It expressed “deep concern and surprise at the drastic and hard-to-explain change in the trend of the preliminary results after the closing of the polls.” But it did not present any evidence for its questioning of the election results.

This is an outrage for an electoral observation mission, as anyone familiar with such procedures knows. An official inside this mission—they cannot be named here because they are not authorized to speak for the mission—expressed concern about what this would do to the reputation of the OAS.

Hours before the OAS press statement, and even longer before the votes were counted, Senator Marco Rubio stated falsely, “In #Bolivia all credible indications are Evo Morales failed to secure necessary margin to avoid second round in Presidential election.” He also alleged, without evidence, that there was “some concern he will tamper with the results or process to avoid this.” Trump administration officials followed with similar statements.

The potentially violence-promoting claims of the OAS, which echo those of Rubio and the Trump administration, have driven much of the media’s coverage, and serve as an anchor for those who want to discredit the election.

For those who bothered to look at the data (the 34,000 tally sheets, signed by observers, are on the Web), it was clear that the increase in the share of Morales’s votes in later returns was simply a result of geography. In other words, Morales’s support is much stronger among rural and poorer populations, whose votes came in later. Such a geographically driven change in vote margins is not that uncommon in elections—as anyone who has watched election returns on television in the United States knows. And this change wasn’t even that big of a shift. The official data show a gradual change in the margin between the candidates as the mix of returns changed over time.

The OAS mission pointed to a pause in the “quick count” as though it was cause for suspicion. This is an argument that no election observer should ever make. The quick count is not an official count, and does not have the same safeguards. It has never been promised nor intended to give a complete result. It is done by contractors who take photos of the tally sheets once they’ve been publicly certified by local electoral jurists, and upload the results via a mobile application so as to get partial results out faster.

There were perfectly legitimate reasons for the government to stop the quick count when it did. In a highly polarized situation that includes violent attacks on electoral facilities, it may not be a good idea to continually update two sets of election results, which differ significantly because of procedures, in what appeared to be a close election (for the 10-point margin).

Opponents of the Morales government, and its political party, the Movement Toward Socialism (MAS), have also argued that Morales should not have been able to run for reelection. Their arguments are that the Constitution forbids it, and that in a referendum held in February 2016, a 51-to-49 majority voted not to allow the president and vice president to run for another term.

If you like this article, please give today to help fund The Nation’s work.  DONATE

But in December 2017, the nation’s highest court ruled against term limits. Regardless of what anyone thinks of it, in Bolivia, as in the United States, the court’s decision is the law of the land. For many of those trying to overturn the results of the presidential election—including the Trump administration and its allies—the end justifies the means, and the rule of law is not a consideration.

This political intervention by the OAS has implications beyond Bolivia. It is understandable that many journalists see the OAS Electoral Observation Mission as neutral and take its statements as reliable—they usually are. But this is not the first time that OAS officials put their fingers on the scale of an election result under US pressure, and with horribly violent results.

Paul Farmer of Harvard’s Medical School, who later became President Bill Clinton’s deputy special envoy for Haiti at the United Nations, testified in 2010 to the US Congress about what happened next as the US government

sought…to block bilateral and multilateral aid to Haiti, having an objection to the policies and views of the administration of Jean-Bertrand Aristide.… Choking off assistance for development and for the provision of basic services also choked off oxygen to the government, which was the intention all along: to dislodge the Aristide administration.

The OAS’s unjustified change of position on the 2000 Haitian election was vital to the regime change operation of 2000–04, in which the first democratically elected president of Haiti was taken to Africa on a US plane. Thousands of people were murdered following the coup, and officials of the constitutional government were jailed.

The OAS also intervened in the Haitian election of 2010, doing something that perhaps no election monitors had ever done: They reversed the results of the first round without a recount or even a statistical analysis.

Looking forward in Bolivia, the government invited the OAS to audit the election results, and an OAS team arrived on Thursday for a 10-to-12-day visit. There are some voices within the OAS, such as the Mexican government, who have criticized what the OAS has done so far, and we can only hope that a few governments can keep this latest mission honest in the face of pressure from Washington and also the governments of Brazil and Argentina, who favor regime change in Bolivia.

Pushing Morales out will not be easy. After 13 years of some of the most successful economic policies in the hemisphere, he remains popular. During his presidency, income per person in Bolivia has grown at twice the rate of the Latin American average; poverty has been reduced by 42 percent; and extreme poverty has dropped by 60 percent.

What could be most important right now is for members of the US Congress who are against this regime change operation to weigh in. Rubio and the Trump administration can influence the OAS partly because Washington provides about 60 percent of the organization’s budget. But the US Congress approves that funding, and there are people among the OAS staff and member governments who believe in keeping the organization’s electoral observation functions honest. These people need all the help that they can get right now.

[Portside moderator: As Portside is reposting this November 8, 2019 article from The Nation on November 11, 2019, the New York Times is reporting:

President Evo Morales of Bolivia, who came to power more than a decade ago as part of a leftist wave sweeping Latin America, resigned on Sunday after unrelenting protests by an infuriated population that accused him of undermining democracy to extend his rule.

Mr. Morales and his vice president, Álvaro García Linera, who also resigned, said in a national address that they were stepping down in an effort to stop the bloodshed that has spread across the country in recent weeks. But they admitted no wrongdoing and instead insisted that they were victims of a coup.

“The coup has been consummated,” Mr. García said.

Mr. Morales was once widely popular, and stayed in the presidency longer than any other current head of state in Latin America. He was the first Indigenous president in a country that had been led by a tiny elite of European descent for centuries, and he shepherded Bolivia through an era of economic growth and shrinking inequality, winning support from Bolivians who saw him as their first true representative in the capital.

“I want to tell you, brothers and sisters, that the fight does not end here,” Mr. Morales said on Sunday. “The poor, the social movements, will continue in this fight for equality and peace.”

The New York Times also reported earlier in the day on November 11, 2019:

Bolivia’s military chief on Sunday called on President Evo Morales to resign, dealing what was likely a fatal blow to his efforts to cling to power in the face of widespread unrest over last month’s fraud-marred presidential elections.

The commander of Bolivia’s armed forces, Gen. Williams Kaliman, said the military chiefs believed Mr. Morales should step down to restore “peace and stability and for the good of our Bolivia.”

Michael Kozak, the top diplomat at the State Department overseeing Latin America policy on Sunday endorsed the call for a new election. “All those implicated in the flawed process should step down,” he wrote on Twitter, without addressing the question of whether Mr. Morales should be eligible to run again.]

Mark Weisbrot is codirector of the Center for Economic and Policy Research in Washington, DC, and president of Just Foreign Policy. His latest book is Failed: What the "Experts" Got Wrong About the Global Economy (2015, Oxford University Press).