books “We Are All Fast-Food Workers Now”:

This book is a must-needed introduction to the rising international labor movement against the neoliberal wage and labor regime. 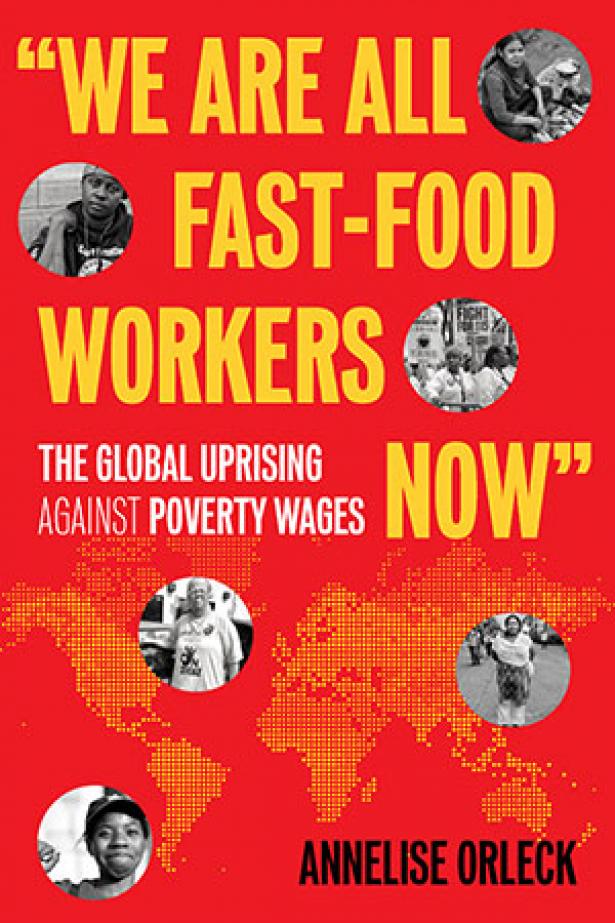 In the decade since the global financial crisis there has been a noticeable increase in attention to contemporary labor militancy, particularly on the part of workers in industries that many commentators have not traditionally associated with workplace militancy. Workers in home health care, discount retail, and food service, particularly fast food, among other industries have seen their struggles for better wages, conditions, and security garner, at the very least, a broader understanding of the workplace dimensions of contemporary American inequality. Despite an ongoing rise in deeply punitive immigration enforcement, undocumented immigrants have remained heroically undeterred in their labor activism. Beyond the national borders of the United States, the demands of capital that link uprooted farmers, sweatshop laborers, fast-food workers, and consumers of all backgrounds into an interlocking web of global profit making, inequality, and exploitation have also come into sharper relief in recent years.

In “We Are All Fast-Food Workers Now” Annelise Orleck has gifted scholars, students, and the general public an indispensable introduction to these trends from the perspective of those most affected (or rather, exploited) and those who are trying to fight back. Structured in a manner more reminiscent of a series of dispatches rather than a traditional monograph, “We Are All Fast-Food Workers Now” sprawls over five discrete sections and forty relatively brisk chapters. Moving between the Philippines, Bangladesh, Cambodia, Mexico, South Africa, Brazil, and the United States, with plenty of other stops between, Orleck’s book presents not so much an argument as a portrait of the multitude of ways that diverse people who make up the global working class are forced to work for wages to (just barely) get by and how they are fighting back for better conditions and lives.

One of the great strengths of the book is that Orleck is clearly conscious that the stars of this study, for lack of a better term, are the diverse cast of workers and activists organizing on the ground against entrenched power, violence in fact and threat, and so often the longest of odds. Her voice comes through clearly at various moments, and she gives much needed analysis of context ranging from the North American Free Trade Agreement’s relationship to the declining fortunes of small Mexican farmers to the political context of a variety of shifts in the governance of the Philippines, but it is the voices and sophisticated analyses of workers themselves that Orleck rightfully highlights. This style makes the book nothing less than a godsend for the contemporary classroom. Courses and teachers not just in labor history and studies but American, world, and global history, sociology, anthropology, American studies, and gender and sexuality studies will all be able to make use of this book. It would be easy to imagine—as this reviewer indeed did while reading it—how to use Orleck’s book as a kind of textbook or guidebook for a whole class, taking her analysis and reporting of different trends and events as a starting point for deeper contextual, historical, ethnographic, and political economic study of topics ranging from agrarian restructuring to the political and economic dominance of antidemocratic global economic bodies to the deep interrelationship between gender and class.

Given the book’s unique format, compelling foregrounding of worker and activist voices, and clear pitch at nonspecialist audiences, quibbling with its analysis would seem a bit unfair. This is a book above all about incredibly inspiring people engaging in a range of solidaristic actions. As the dispatches from fast-food workers, sweatshop employees, immigrant agricultural laborers, and university adjuncts come rapidly one after the other, readers are left with a clear sense of the tremendous sacrifices being made for what at times might seem to some to be relatively small gains: twenty cents more an hour or a couple of extra minutes’ break here, an ever so slightly less arbitrary management or a bit more accommodation for pregnant workers there. The net effect is a clear and compelling argument that what unites such divergent struggles beyond the global tentacles of McDonalds, Wal-Mart, Nike, and countless other twenty-first-century versions of Frank Norris’s Octopus are two truths. First, that around the world the power of workers to exercise meaningful power in their workplaces and over their economic lives is exceedingly low, and, second, the degradation of work and workplace power has made even seemingly small but nevertheless important positive change both incredibly difficult and dangerous.

Where I wish Orleck gave a bit more analytic commentary is in the social and political contexts of some of these successes. One of the book’s opening dispatches concerns the 2015 hearing before the Brazilian Senate that brought together McDonalds workers from around the world to tell stories of injury, exploitation, and wage theft that bear remarkable similarity regardless of nation. This moment serves to open the hopefulness of the stories in the book, as clear global solidarity and collective interest develop out of the experience of this diverse cohort of people united by their work experiences. Left largely unsaid in this account is the 2015 control of Brazilian politics by the Brazilian Worker’s Party (WP) that allowed for and encouraged such hearings to take place in the first place. Similarly, the book ends on a rightfully hopeful note regarding the success of community benefit agreements for worker friendly development projects in locales like Los Angeles where the “traditional” labor movement maintains substantial power in municipal politics. There is of course a mutually reinforcing relationship between successful bottom-up organizing and the existence of political power that is sympathetic to labor issues or can at least be made to be sympathetic through instrumental means. Indeed, there is no better example than the WP’s thirteen-year dominance of Brazilian politics. In her understandable zeal to tell the inspirational stories of those fighting back against the forces of unfettered capital accumulation around the world, this institutional side of the equation occasionally fades far into the background.

Nevertheless, in my imagined future class on contemporary global labor struggles, such context will be the stuff of explication week to week, while Orleck’s monumental achievement and the hundreds of voices she highlights will guide us from the beginning to the end.