‘The Success Is Inspirational’: The Fight for $15 Movement 10 Years On

Federal lawmakers failed to increase the minimum wage, but US workers made other gains, and they are setting their sights on new goals. But across the country, states and companies have raised wages in the wake of Fight for $15’s efforts.

December 1, 2022 Steven Greenhouse The Guardian
Printer friendly
‘The Success Is Inspirational’: The Fight for $15 Movement 10 Years On Published December 1, 2022 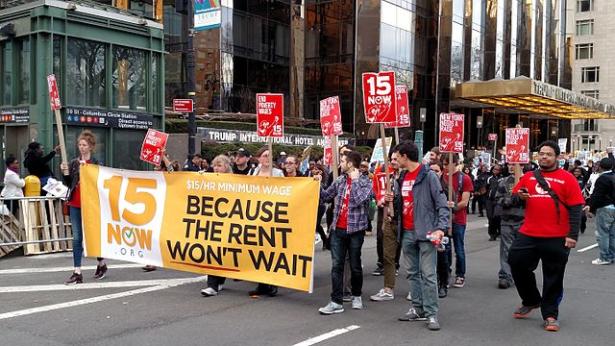 Ten years ago next week, 200 fast-food workers walked out at 20 New York City restaurants, demanding $15 an hour in pay. At the time, many observers scoffed at $15 as an absurd, pie-in-the-sky demand. As the movement’s anniversary approaches, the Fight for $15 movement has proven the naysayers wrong.

Congress has failed to increase the federal minimum wage, which has been stuck at $7.25 an hour since 2009. But across the country, states and companies have raised wages in the wake of Fight for $15’s efforts. While, for many, $15 an hour is still too low, the increases have been especially important in the current era of rising inflation.

Twelve states and Washington DC have adopted a $15 minimum hourly wage, although in many states it’s being phased in. Even deep-red Nebraska has embraced a $15 minimum, while Hawaii has approved an impressive $18 minimum to be phased in between now and 2028.

“The movement’s success is inspirational,” said Yannet Lathrop, a policy analyst at the National Employment Law Project. “It has helped 26 million workers across the US win $150bn per year in additional pay. Its impact for workers of color is significant. About 12 million workers of color have benefited and their additional earnings are $76bn a year.” For workers whose wages rose, this means an average raise of roughly $6,000 a year.

The Service Employees International Union (SEIU) helped create and underwrite the Fight for $15 movement because it believed that the US was paying far too little attention to the plight of low-wage workers. Fight for $15 began in New York and relied on a series of one-day strikes that inspired fast-food workers in other cities. It ultimately expanded to staging strikes in 340 US cities on the movement’s fourth anniversary in 2016.

“The key accomplishment was that the Fight for $15, which was led by black, brown and immigrant workers all across the country, taught all workers that when you join together you can make changes in your jobs and in your lives,” Mary Kay Henry, the SEIU’s president, told the Guardian.

“Twenty-six million workers have seen their wages go up to $15. That is a standard that was scoffed at when it started, but that standard is now getting challenged for demands for an ever-higher minimum, which is a real indicator of success.”

Frances Holmes, a fast-food worker in St Louis, Missouri, is glad that her pay has jumped from $7.75 an hour a decade ago to $15 today. “I was able to move from an apartment to a house,” she said. “I was able to afford to buy bacon again, but it’s still a struggle living on $15. They don’t give you enough hours to work each week. Our biggest hope is to have a union. That would help us get more money and more hours.”

Not all of the campaign’s initial aims have panned out. Its original goal was “$15 and a union”, and while it has racked up major successes in raising wages, it has failed to unionize any fast-food workers. One reason is that its pressure campaign against McDonald’s has not gotten the fast-food giant to agree not to oppose unionization efforts.

“The Fight for $15 has lifted up the whole issue of the pathetic state of the minimum wage,” said Ruth Milkman, a sociologist at the City University of New York’s School of Labor and Urban Studies. “In terms of pushing the envelope to make the utopian real, it was extremely successful, at least in blue cities and states.”

“As for its stated goal of ‘$15 and a union’,” Milkman added, “the second half of that has not taken place.” She said the movement’s assumption that it could get the federal government to declare that heavily franchised companies like McDonald’s were joint employers “turned out to be wrong”. If the government considered McDonald’s to be a joint employer with its franchisees, it would make it far easier for employees of the fast-food giant to unionize and win contracts that would cover many of its locations, rather than having to negotiate many individual contracts with individual franchisees.

“It’s pretty tough to unionize in the fast-food sector without the joint employer thing,” Milkman said.

With their successes on the wage front and lack of success on the unionization front, workers and strategists behind Fight for $15 are trying to figure out their next steps. One ambitious new initiative has been to set up a new group, the Union of Southern Service Workers, to help workers across the southern region of the US, where the Fight for $15 movement has had the least success in getting employers and states to raise pay.

Last weekend, more than 100 fast-food, retail, healthcare, warehouse and other workers from the south’s service economy met in Columbia, South Carolina, to launch this new, non-traditional union. The organizers said the effort would seek to unite “workers across workplaces plagued by low pay, high turnover and a legacy of racism”.

Terrence Wise, a Taco Bell worker and Fight for $15 leader who attended the South Carolina meeting that founded the new union, said: “We’re going to do whatever it takes: go on strike, do civil disobedience, do union elections, target the employer in any way possible. That’s what’s unique about this. It’s across different industries.

“We know that wages are lowest in the south, and we know the history of the south: slavery, plantations, union-busting,” Wise continued. “Racial inequality is baked into the country and especially the southern states. We know we can win in California and New York. Don’t you want to take the fight where it’s hardest to win, where it’s most challenging? That means the south.”

This new union may push for union elections at nursing homes in Mississippi or stage protests at Amazon warehouses in Georgia over safety problems there.

Wise said another goal of the South Carolina meeting was to help develop new leaders, people like Lizett Aguilar, a McDonald’s worker in Los Angeles. Aguilar said the biggest effect of Fight for $15 for her hasn’t been that her pay rose to $16 an hour from $8.50 a decade ago, but that “the Fight for $15 has helped me lose my fear about speaking out against injustice”. Aguilar has helped lead marches and knocked on legislators’ doors to win passage of California’s Assembly Bill 257 (AB 257), which has set up a type of sectoral bargaining for more than 550,000 California fast-food workers to help them get raises and reduce wage theft and sexual harassment.

Fight for $15 leaders say their movement helped inspire the union drives at Starbucks and Amazon. Indeed, some activists say the Fight for $15 movement should seek to help the unionization wave grow faster and further by copying the Starbucks campaign and pushing to unionize hundreds of McDonald’s restaurants, despite the lack of joint employer status.

But some Fight for $15 leaders don’t see that as a formula for success. SEIU president Henry said: “Bargaining store by store in a franchised industry is not going to give workers the power they need. That’s why we will fight to pass legislation like AB 257 in other states.”

Terrence Wise feels considerable pride when he hears that Bank of America announced a $15 minimum wage in 2017 and a $22 minimum wage recently. “Whenever I hear about wages being increased – just the other week in Nebraska, or when we hear about Starbucks workers forming a union or Amazon workers challenging Jeff Bezos – that kind of change is real, and we know it was inspired by the Fight for $15 and those workers in New York City walking out 10 years ago,” Wise said.

[Steven Greenhouse is a journalist and author, focusing on labour and the workplace.]

With so much on the line, journalism that relentlessly reports the truth, uncovers injustice, and exposes misinformation is absolutely essential. We are raising $1m to fund our journalism in 2023. If you can, please consider a year-end gift to the Guardian. Unlike many others, the Guardian has no shareholders and no billionaire owner. Just the determination and passion to deliver high-impact global reporting, always free from commercial or political influence. Reporting like this is vital for democracy, for fairness and to demand better from the powerful.

We provide all this for free, for everyone to read. We do this because we believe in information equality – that everyone needs access to truthful journalism about the events shaping our world, regardless of their ability to pay for it. Every contribution, however big or small, powers our journalism and sustains our future.