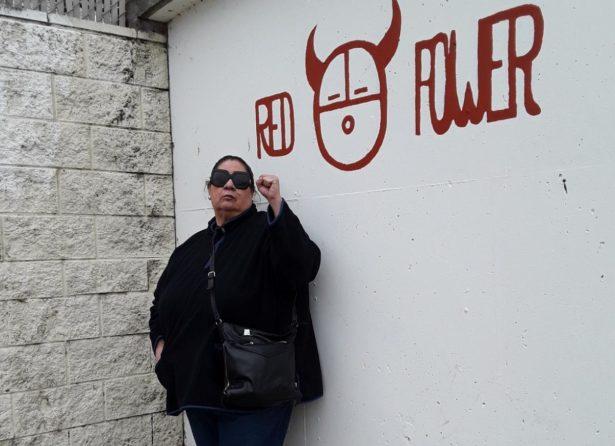 UrbanRezLife standing in front of the iconic “Red Power” graffiti at Alcatraz, which she helped to restore a few years ago, in 2019., WNV/Natassja Trujillo

From 1969 to 1971, when UrbanRezLife was eight years old, she and her family were among a group of nearly a hundred indigenous activists who occupied the island, protesting treaty violations and boldly demanding sovereignty. Eventually, the occupation was forcibly ended by the U.S. government — but not before awakening the American public, igniting indigenous activism nationwide, and directly affecting federal policy.

Fifty years later, the island is where UrbanRezLife goes to be by herself, reflect and even weep. “Alcatraz is my rez,” she said, shorthand for reservation. “I love Alcatraz with all my heart. It changed all of our lives — you can’t leave that space without taking it with you.”

“The spark that started the fire”

The seeds for the Alcatraz occupation were planted over a decade before the activists stepped foot on the island. In 1956, the Indian Relocation Act — a law designed to encourage indigenous people to leave reservations and their traditional lands with the goal of assimilating them into urban areas — was passed.

The Indian Relocation Act was one of many “Indian termination policies” which sought to end the U.S. government’s recognition of tribe sovereignty, forcing indigenous people to become tax paying citizens that were subject to state and federal laws.

The urban migration as a result of the policy played a critical role in the forced termination of many federally-recognized tribes, and often left participants struggling to adjust to life in cities where they faced unemployment, discrimination and severance from their culture.

Because of the Indian Relocation Act, the population of Native Americans in cities like San Francisco skyrocketed. By the late 1960s, many participants in the relocation program, especially students from the Bay area, had begun organizing across tribal lines, championing “Red Power” and fighting for self-determination.

“Alcatraz shouldn’t be viewed as a singular event, but as part of a wider activism,” said Herb Butler, a native Alaskan activist who lived on the island during the occupation. “The relocation program allowed [American Indians] to compare notes on what was happening on a nationwide scale, so they could organize and start the movement.”

The final impetus for the occupation took place in October 1969, when a fire destroyed the San Francisco Indian Center. The center had been at the heart of the urban indigenous community, providing them with jobs, health care and a haven to hold pow wows in peace. The loss of the Indian Center was devastating, but it was also what UrbanRezLife calls “the spark that started the fire.”

“We hold The Rock”

Before dawn on November 20, 1969, a boat carrying nearly 80 indigenous activists arrived on the chilly shores of Alcatraz. The island, which is 22 acres and only 1.5 miles from San Francisco, had once been reserved for housing infamous criminals. However, it hadn’t been touched since it was shut down in 1963 — making it the perfect location for a new Indian cultural center. To justify reclaiming Alcatraz, the activists cited the Treaty of Fort Laramie, an 1868 agreement between the United States and the Sioux stating that all abandoned federal land was to be returned to native people.

Upon their arrival, activists wrote in bold red letters across the water tower: “Peace and Freedom. Welcome. Home of the Free Indian Land.”

The group called themselves “Indians of All Tribes.” Their first official proclamation to the public was a manifesto addressed to the “The Great White Father and All His People.” In it, the activists claimed that though Alcatraz was theirs by “right of discovery,” they were also willing to buy it for $24 in glass beads and red cloth — the same price their people supposedly received for the island of Manhattan.

The dissidents went on to declare that they didn’t mind that Alcatraz was lacking in freshwater and completely devoid of opportunities. If anything, this would make the island “more than suitable for an Indian reservation, by the white man’s own standards.”

The radical, inventive and tongue-in-cheek tactics of the Alcatraz occupiers immediately captivated the media, enabling the movement to garner donations from across the country. Celebrity supporters included Jane Fonda, Marlon Brando and the rock band Creedence Clearwater Revival, whose donation was used to purchase a boat for transporting supplies.

During the 19-month occupation, the activists slept in the warden’s quarters and in empty prison cells. They wasted no time in electing civil officers, setting up an infirmary, and instituting a school. The activists also established a security force to patrol the shoreline, pointedly dubbed the “Bureau of Caucasian Affairs” (a play on the widely-despised Bureau of Indian Affairs). One of the occupants, a Sioux activist named John Trudell, began broadcasting radio updates on an underground station called “Radio Free Alcatraz.”

At the height of the occupation, there were nearly 400 people protesting on the island. For most activists living on Alcatraz, the occupation was about more than simply getting their demands met — it was about publicly reclaiming their heritage and holding the federal government accountable for the first time in history. “At that point, our people were like, ‘Oh, we can fight. We can fight openly, we don’t have to be behind any kind of closed doors and be silent,’” UrbanRezLife said.

Before the occupation, UrbanRezLife’s childhood was spent attending Black Panther meetings in San Francisco and marching in protests. Because she grew up before the Indian Religious Freedom Act of 1978 was passed, she also has vivid memories of her family practicing tribal ceremonies in secret. “We were doing all of these things in the community, but I didn’t feel proud until we went to Alcatraz,” she said. “It was then that I figured out I was Red. I was Indian.”

The end of the occupation

In January 1970, tragedy befell the island when 13-year-old Yvonne Oakes fell down a staircase to her death. Shaken by the loss of his daughter, the movement’s frontman, a Mohawk activist named Richard Oakes, left Alcatraz to mourn. (Two years later, when he was only 30 years old, Oakes was murdered in an altercation with a white supremacist. Though Oakes was unarmed, his killer was acquitted by the jury.)

As the months wore on, the occupation’s numbers began to dwindle. Many of the original occupiers left to return to school, and the island was rapidly becoming overrun by hippies and drug abusers. In an effort to force the occupiers to return to the mainland, the federal government cut off all electrical power and telephone services. Shortly after, several buildings caught fire.

On June 11, 1971, the occupation was forcibly ended when three Coast Guard cutters containing 20 armed marshals arrived on the island. The 15 remaining activists on the island surrendered peacefully.

Indians of All Tribes didn’t achieve their goal of permanently seizing Alcatraz, but the movement did have a lasting effect on federal policy. In July 1970, President Richard Nixon officially rejected Indian termination policies, including the Indian Relocation Act, and called for Congress to pass a bill authorizing the return of sacred land to the Taos Pueblo Indians. A series of bills followed, all in favor of self-determination and ending government-sanctioned assimilation.

Fifty years later, the Alcatraz occupation remains a beacon of hope for the indigenous community. “Alcatraz was the start of it all,” UrbanRezLife said. “It opened the doors for our people.”

For Butler, the occupation was an opportunity for him and his people “to become leaders of their own destiny.” Today, Butler is 76 years old — and still regularly meets with members of Congress to advocate for Alaska natives. “Those of us that remain alive from the movement are now elders and are teaching the young,” he said. “We’re advisors across the nation. That’s a result of the movement.”

Half a century later, there remains a lot of work to be done. Across the United States, violence against Native women has reached staggering rates. Recently, nine states approved legislation that would effectively outlaw demonstrations near pipelines, a measure which would make it easier for the government to target indigenous activists defending their land. And of course, there remains the issues of treaties, many of which continue to be broken or only partially lived up to by the U.S. government.

And yet the spirit of Alcatraz lives on.

Today, UrbanRezLife is a community activist and artist living in San Francisco. She is still teaching herself not to let anyone diminish her story. “As a child, I was surrounded by people who were doing the most beautiful work,” UrbanRezLife said. “They taught me to always be there for your people. Even if all you can do is be the person to make the coffee — be that person. There’s no role too small.”

Ever since 1975, several thousand indigenous people have gathered on Alcatraz each year for Unthanksgiving Day, a ceremony that commemorates the occupation while celebrating indigenous survival in the face of colonization and genocide.

In 2016, protests erupted at the Standing Rock reservation in North Dakota, due to a proposed pipeline that would corrupt the water and cross ancient Sioux burial grounds. Many veterans of the Alcatraz occupation traveled across the country to show their support. Among them was UrbanRezLife, who found herself overwhelmed by “the beauty of being a part of something from the beginning.”

“When I was a kid, I watched the ancestors fighting for treaties and land, and the sovereignty of our nation,” she said, struggling to hold back tears. “Now here we are, all these years later. We’re still fighting — but we’re fighting stronger than we fought before.”