Elizabeth Warren and Bernie Sanders have proposed wealth taxes on the biggest fortunes in America. The White House and lots of billionaires are attacking them for it. But guess what: You'll be surprised who supports it. 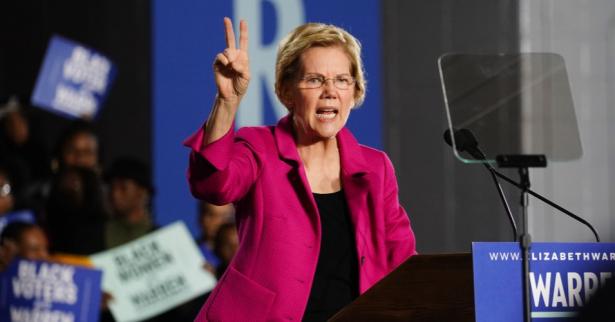 In her primary campaign for the 2020 Democratic presidential nomination, the Massachusetts Democrat has harshly criticized some of the wealthiest Americans for complaining about the tax, whose revenue she plans to use to pay for a universal childcare program, student debt forgiveness, and tuition-free public college.

Sixty-three percent of Americans support the wealth tax, including 77 percent of Democrats, more than half of Independent voters, and 57 percent of Republicans.

College-educated Republican men—who are more likely than people in other demographics to be affected by Warren's wealth tax—were the only group in the New York Times/SurveyMonkey poll who reported disapproval of the plan, with 41 percent opposing it.

As the Times reported, such wide support for any tax hike plan is rare; just 45 percent of Americans backed President Donald Trump's tax plan in 2017, whose benefits mainly went to corporations and the wealthy.

On social media, political observers called the diverse coalition of supporters for the plan "remarkable."

That 57% of Republicans approve of a 2% wealth tax on fortunes above $50 million is absolutely remarkable.

And tends to confirm my hunch that economic leftism per se (as opposed to concerns about health care details) isn’t a huge 2020 Democratic problem.https://t.co/sC1JBLCv4D

This is incredible: 59% of Republican men without a college degree support a wealth tax. Wealth tax polls higher with Republicans than with independents among both men and women? https://t.co/RctulGH0RT

At a rally in Iowa this week, Warren suggested Bloomberg thought it would be "a lot cheaper to spend a few hundred million dollars just buying the presidency" than to pay just two percent of his $54 billion wealth to help narrow the wealth gap in the United States.

Sen. Elizabeth Warren: "Some people have figured out you know it’d be a lot cheaper to spend a few hundred mil just buying the presidency instead of paying that two cent wealth tax." pic.twitter.com/i5GisNkdUN

Some wealthy Americans have joined a majority of the electorate in supporting Warren's plan and that of Sen. Bernie Sanders (I-Vt.), who is also running for the 2020 nomination and has proposed a wealth tax on the richest Americans and corporations.

Filmmaker and activist Abigail Disney—great niece of Walt Disney—expressed her support on Twitter this week.

"[If] people own enough to completely reinvigorate all the aspects of the supposed American Dream that have decayed into near uselessness over the last 50 years, then Bernie, Elizabeth, I say go for it," wrote Disney. "Bring on the wealth tax. I will happily pay."