Mobilization and strike against pension reform are expected to be massive 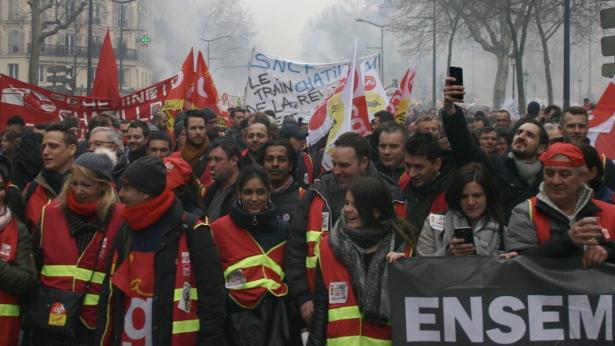 Railworkers on a Paris demonstration,

Tuesday, November 19. Dinner at the Elysée. The President brings together the close circle of ministers and parliamentarians. No more hesitation: the pension reform will be implemented. Everyone must be on a war footing. There's no way we're going to be impressed. We had to give in, back off in front of the yellow vests, drop a little bit on the hospital. For the students, we'll wait. This time, it passes or breaks. It has to pass. The next day the offensive was launched: parliamentarians, ministers and the First in the lead, attacked the media. The element of language is simple and brutal: "The strike of December 5th is a movement of privileged people against a reform of justice!" The aim is to draw up an opinion against employees who benefit from special status, particularly in the public transport sectors, in the name of "the equality of the pension system for all".

The strike is expected to be massive

We are two weeks away from December 5. The day of strike and mobilization promises to be massive. In the corridors of the palace, in l'Elysée, there is talk of the "December 5th wall".

In September, the Parisian metro unions - RATP - launched a call for an unlimited strike. The main unions of the national railway Company - SNCF - decided to join the action on the same date. Before the summer, Macron passed the reform of liberalisation and the questioning of the statutes in parliament in the name of competition, deaf to strike movements and to any consultation. On 16 October, the main national trade union - except the CFDT - launched a call for an inter-professional strike. Renewable wherever possible, decided by employees. Since the summer, massively monitored movements have affected hospitals, while strikes against deplorable conditions are spreading in mergency services. In November, health workers and doctors parade neck and neck to demand credits and positions. The suicide of a teacher caused a shock, revealing the unbearable working conditions in certain sectors and the depth of discomfort affecting the profession. Students organize themselves in several universities. We saw in the street the firemen, the lawyers, the airline pilots. Police officers do not escape exasperation. The country is in pain. The climate demonstrations are impressive. The trap of the division between ecology and social issues was avoided behind the slogan "end of the world end  of the month same fight". The November 23rd march against violence against women and for ways to deal with it is a tidal wave. On 4 November, at a general meeting in Montpellier, the Yellow vests called to join the strike on December 5th.

50% of the French respondents always say they are in solidarity with the Yellow vests, even when most of them condemn violence. This solidarity goes far beyond the movement born a year ago: 87% say they are in solidarity with the hospital's defence movements, and 62% with the fight against pension reform. (Viacoice Survey for Liberation). In the difficulties of life, comes first the cost of living (69%), then "inequalities" (51%), the lack of resources and personnel in some public services (51%).

What is at stake

Macron pushed the offensive because he knew that the confrontation would be long-lasting. It must limit the impact of December 5th, show that it will not give in. 46% of respondents think it will not decline compared to 38%. Faced with the means deployed to intimidate and divide, it must be shown that it is a question of working longer to earn less in retirement. The balance of power includes an awareness of what is at stake with the reform and in this confrontation.

Macron was the man promoted to the highest positions to impose the reforms that none of his predecessors, from Chirac to Hollande, could implement. The pension system has been reformed several times, but not on the main points: raising the statutory retirement age - now 62 - and moving from pay-as-you-go to funded pension provision. Finally, to achieve what Blair and Schröder, and other governments, have been able to impose. The moment was right with the collapse of the classical parties, the break-up on the left, the push of Le Pen. The space was freed in 2017 for a "grand coalition" in the French style, in the a background of populism, while in the first round Macron obtained only 24% of the votes (21% for Marine Le Pen).

By their unexpected eruption, the Yellow vests blocked the royal road promised to the young President. The impact of this revolt is due to the basis of the demand for "better living", "living and not surviving" quite simply, "making ends meet", in which a majority of the country, all popular categories combined, recognize itself. That is what is happening this fall. Libération concludes the survey by noting that "it is public opinion that has the best balance of power with power. His support for the renewable strike that begins on December 5 will be crucial ».

The success announced on December 5th will shape the consequences: sharpening the confrontation, continuing the movement through its enlargement. Leaders and activists know that it will be a question of opening up space for new enlargements of movements rooted in professional and personal concerns, "of life". Movements converge at their own pace, according to situations, power relations, cultures of action, towards common goals, facing the same political obstacles.

Nearly 9 out of 10 French people consider that they are experiencing a social crisis. For them, Macron has not changed, either in form or substance, and 75% believe that he should change his policy. Macron could for a moment count on popular political disinheritance and institutional legitimacy. Especially since neither Martine Le Pen nor Melenchon appear to be answers of hope.

At the end of 1995, a movement of several weeks of strikes paralysed the country. The power of the movement with the support of public opinion had forced the then Prime Minister Alain Juppé to withdraw the reform project on special pension schemes. Less than two years later, the plural left was in the majority and took over the government. We are not 1995. Recalling this moment, a former Sarkozy adviser warns: "in a political, social and moral situation that is infinitely more explosive today than in 1995, the outbreak of a social conflict of the same nature could plunge France into indescribable political and social chaos and deprived of any foreseeable outcome". The sociologist François Miquet-Marty is concerned that in "this accumulation of democratic deficiencies" with the weakness on the left, "troublemakers, and at worst violence, which, combined, flirt with the democratic explosion, can prosper".

On the left, give a signal

This democratic deficiency, which is fraught with dangers, is one of the characteristics of the moment. The responsibility of the left-wing forces, even if weakened, is engaged. With all the left. It is a question of meeting the pressing demand for an offer against Macron. To overcome the feeling of fatalism in the face of a duel announced between Macron and Le Pen in the coming months. The reconstruction work will be long and will take unpredictable forms. We will have to innovate and respond to the crisis in the relationship with politics. Each signal becomes even more important. On December 11th, at the call of the national secretary of the PCF Fabien Roussel, a meeting is organised bringing together socialists, communists, ecologists and Mélenchon's Insubmissives, with trade unionists and association activists. It is a question of showing the willingness to work together for a pension reform that will bring justice.