Courts have grown more dependent on fees and fines for revenue. But enforcing them is expensive — and we don’t even know the true costs. 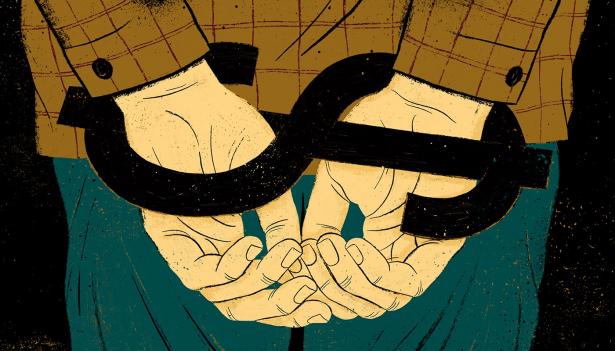 Over the past decade, criminal courts in the United States have increasingly imposed fees and fines on defendants — a practice that disproportionately hurts people of color and low-income communities. In the process, many states and local jurisdictions have grown more dependent on these fees and fines for government revenue, including to fund their court systems. But the fees and fines system is actually an ineffective source of government funds, according to a new report by the Brennan Center. The study finds that counties were spending a high proportion of their fee and fine revenue on collection and enforcement costs, rather than on efforts to improve public safety.

But these findings do not demonstrate the full scope of the problem. That’s because many of the costs associated with implementing fees and fines are not being tracked at all, which leads to major gaps in the available data. As a result, the true costs of the fees and fines system are likely much higher than presented in the new study. Michael Crowley and Matthew Menendez, two of the report’s co-authors, spoke with Tim Lau about the implications of the report findings.

Tim Lau: Your report finds that much of our court system is now dependent on criminal justice fees and fines for their revenue. How did we get here?

Matthew Menendez: The great recession was an inflection point where government, particularly state and local governments, really ramped up their use of fines and fees. I think there are a few reasons for that. One, tax and other revenues plummeted. It was very lean times for all kinds of governmental agencies, the courts included. And it’s very hard practically speaking for politicians to raise taxes, because raising taxes tends to hit wealthy and more politically influential people. In contrast, fees and fines disproportionally impact lower income communities of color, people who don’t have as much influence in the political system writ large.

There is some compelling analysis in your report on why court fees and fines are ineffective for raising revenue. But you also suggest that the true costs are actually much higher. Why is that? What are other costs that are worth considering?

Michael Crowley: There are a number of potential costs within the courts themselves, such as the amount of hearing time that’s devoted to fees and fines. Courts are also involved in fee and fine administration and collection. This can lead to having staff that are, in effect, the collections agents of the court, who are busy sending out notices, making telephone calls, and doing a number of things to encourage people to pay. Judges may also be spending a little bit of time outside of the courtroom on fee and fine questions.

There are costs associated with law enforcement, which can get involved because in many states, the court will issue a warrant for failure to pay. In many places people are jailed for failure to pay, which is extremely costly. Practices vary by state, but parole and probation agencies typically are doing some kinds of compliance checks for payment of fees and fines, or they may be involved in actual collections. That takes time away from agencies to help get their clients back on a better track.

There’s more. Departments of motor vehicles get involved because they handle driver’s license suspensions, and this becomes a cost for the local DMV. State tax agencies become involved because typically failure to pay at some level or after some duration of time will trigger a referral of the amount that you owe to the state tax agency.

Menendez: Another cost that we know is out there but have made no attempt to measure is the full economic opportunity costs of these practices to people’s lives. So, there’s a lot of good research showing that people who are jailed experience lifetime impacts on their earnings, that it sets you back for a lifetime. And there are plenty of stories out there about people who fall into this trap.

They get a bill they can’t afford, their license gets suspended, they still try and work, but they have to drive to get there. So these people aren’t out actively participating in the economy the way that they would normally. They’re not going to pay the same taxes that they would normally if they were making more money. We just don’t know exactly how much. You would need a very sophisticated economist to collect tons of data and sort of put together lots of things to measure it. But we do know that, societally, there are also additional harms that are happening. We just can’t put numbers on it.

Why is it so difficult to collect data on fees and fines?

Crowley: There’s an accounting concept known as activity-based costing that is complex to implement. The basic idea is that you track the time spent on various activities, as well as other costs, so that at the end of the day, you know what employees are doing, and you know how you're spending your personnel and other resources. Activity-based costing allows you to track costs across a host of categories. Failing that, you often have more generalized tracking of some kind that just doesn’t drill down to the level of costs for things like fees and fines.

We have this expansive enterprise, really an assortment of state and local systems and agencies, but nobody is specifically tracking and reporting on the costs of what many different elements of this enterprise are doing apart from very basic things like personnel and capital expenses. So it’s very difficult sometimes to say, “What will we save? What do the costs look like now? What might we save under a potential reform?”

What would help improve the fees and fines data collection process?

Crowley: In order for there to be any prospect of change, state legislatures need to mandate basic reporting requirements. Without a legal mandate to report what the costs are related to fees and fines, no one’s going to do it. No jurisdiction is going to do it on its own. Police departments aren’t going to track the officer time that’s spent on the warrants for nonpayment. Courts aren’t going to report on what costs they’re incurring for fees and fines.

Menendez: We didn’t spend a ton of time trying to construct what would be an ideal actual mechanism to capture cost. We’re just arguing that this is worth generating and analyzing data on. We came to realize that basically nobody is even attempting to capture the full costs, much less even just the in-court and law enforcement costs.

Another reason people should care about this issue is that if courts are spending time collecting fees, they’re not spending that time deciding cases. If police and sheriffs are bringing in people on warrants just because they couldn’t pay a fee or fine, they’re not actually doing anything to advance public safety. It gets worse as you go down to lower and lower levels of court and smaller jurisdictions, because they are generally more reliant on fee and fine revenue. So, in order for them to continue to keep the lights on and meet payroll, they have to keep churning enough fees and fines to do so. And that’s just not the point whatsoever of the criminal justice system. The distorting incentive should really worry us.

What are your recommendations for future research on fees and fines?

Crowley: We were partly successful in our research by traveling to many of the counties we studied. We found that just by being there, you often could find court clerks or public defenders or other folks that would be willing to talk with you. But I think there’s a strong possibility that future researchers could go far deeper than we were able to. But of course, it’s expensive to field teams and place people on the ground in various places. Collecting data is difficult to do in any reasonably comprehensive fashion.

Menendez: I agree. A lot of this won’t be easy data to get, even if you’re on location. Ultimately, though, we are excited that more people are going to keep trying to research criminal justice fees and fines. We think that this report is a really good start, and I think we were particularly successful in determining that very little time was spent in court actually making sure that people were able to pay the fees and the fines that were assessed on them. That's very troubling.

Michael F. Crowley is a senior fellow at the Brennan Center for Justice. Crowley has designed and organized a multiyear research project to develop information about the costs of enforcing criminal fees and fines. He also has written about presidential clemency, local law enforcement and immigration, and federal criminal justice assistance.  Prior to joining the Brennan Center, Crowley was a criminal justice consultant and a senior justice policy analyst at the White House Office of Management and Budget. He worked under both Republican and Democratic administrations and contributed to criminal justice reform efforts.

Tim Lau is a staff writer with the Brennan Center’s editorial team. Lau reports and produces explanatory writing on issues including voting rights, campaign finance, criminal justice reform, and civil liberties. He also provides editorial guidance on a variety of web products and platforms, including the organization’s newsletters, podcast, publications, and social media channels. Lau previously worked with the editorial teams at the Natural Resources Defense Council and the Asia Society. Prior to joining the nonprofit world, he began his career with Edelman’s digital practice, working primarily with clients in the consumer technology sector. He received his BA in international relations and English literature from Wheaton College.

Matthew Menendez serves as counsel for the Brennan Center’s Justice Program, where his work focuses on judicial administration and reforming the criminal justice process. Menendez is an expert on improving access to justice, particularly the impacts of fees and fines in the criminal justice system. Menendez has also worked extensively on preserving judicial impartiality and independence through litigation and policy analysis. His work has been featured widely in media outlets, including the New York Times, NPR, Bloomberg, and the Intercept. Menendez is also an adjunct professor at NYU School of Law, where he teaches the Brennan Center Public Policy Advocacy Clinic. Prior to joining the Brennan Center, Menendez was a litigator at Gibson, Dunn & Crutcher LLP in New York City. Menendez attended NYU School of Law as a Dean’s Scholar and graduated in 2007, having served as notes editor of the NYU Environmental Law Journal. Prior to law school, he worked in Washington, DC, as an aide to Sen. John D. Rockefeller IV (D–WV), where he concentrated on issues including the judiciary, energy, and the environment. He received his BA in economics and political science from Swarthmore College in 1999.

The Brennan Center for Justice fights to make elections fair, end mass incarceration, and preserve our liberties — in Congress, the states, the courts, and the court of public opinion. Join us in building an America that is democratic, just, and free.