In designating the Henoko Oura Bay Coastal Waters as Japan’s first Hope Spot, Mission Blue has confirmed that the area is a special place on par with other natural wonders and Hope Spots around the world. 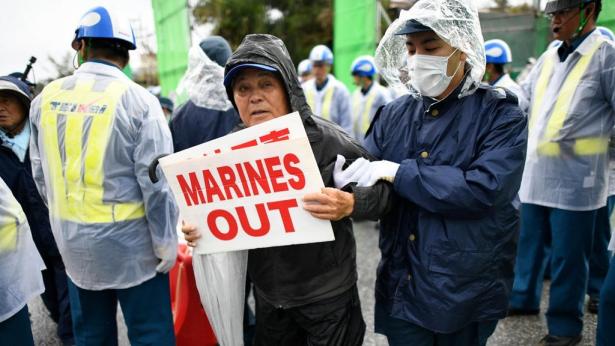 Protestors at Camp Schwab in Okinawa,World Beyond War

Amidst the Japanese government’s relentless push to build a new U.S. military base at Henoko-Oura Bay in Okinawa Island, Japan, Mission Blue’s designation of the Henoko Oura Bay Coastal Waters as a Hope Spot has given much-needed encouragement to those of us who oppose base construction.

Mission Blue is a respected, U.S.-based NGO, spearheaded by Dr. Sylvia Earle, an American marine biologist. Its Hope Spots project has garnered international attention and has inspired marine conservation movements around the world.

In designating the Henoko Oura Bay Coastal Waters as Japan’s first Hope Spot, Mission Blue has confirmed that the area is a special place on par with other natural wonders and Hope Spots around the world. It has also demonstrated that our fight to protect it is worthwhile. And we must keep on fighting. I wholeheartedly welcome and rejoice Mission Blue’s decision.

I hope the designation will attract more international attention to the wonder and plight of Henoko-Oura Bay and will help cultivate more support for our fight.

In particular, it is my wish that this designation as a Hope Spot will bring about three outcomes:  First, that the flawed environmental studies conducted by the Japanese government for base construction will be laid bare.

The Japanese government has claimed in its Environmental Impact Assessment (EIA) and post-EIA surveys that the base will not have adverse impacts on the environment. (“No impact,” they claim. And this is why the base construction is underway).

This “no impact” claim has proved to be false. Land reclamation has already caused tremendous environmental impacts. For example, the dugong, an endangered marine mammal and Okinawa’s cultural icon, was frequently sighted in the Henoko-Oura Bay in the past, but has now disappeared from the area. Sadly, since September 2018, not a single dugong has been sighted in Okinawa.

A second hoped-for outcome is that the Japanese government’s hypocrisy regarding the U.S.-Japan relationship and their discriminatory attitude towards Okinawa will be made visible for all to see.

The Japanese government insists that Japan treasures the US-Japan security relationship and supports the presence of U.S. military bases in Japan, but it has been unwilling to ask any other places in mainland Japan to share the burden of hosting U.S. military bases. Communities in mainland Japan are no more eager than Okinawans to “host” U.S. bases.

The fact is, despite Okinawa consisting of only 0.6 percent of Japan’s landmass, 70 percent of U.S. bases in Japan are concentrated in Okinawa. And now, the Japanese government is trying to build a military airbase in one of the most biodiverse-rich areas in the world. Many see this absurdity as a manifestation of the Japanese government’s hypocrisy and discriminatory attitude toward Okinawa.

Finally, I hope that the designation will encourage people from different backgrounds to re-examine the relationship between the environment, human rights, and peace.

Okinawa was the site of one of the most brutal battlegrounds during World War II. People were killed. Houses, buildings, and castles were burnt. And the environment was destroyed. Today, Okinawa still suffers not only from the scars of the War but also from the unfortunate legacy of the War in the form of this high concentration of military bases.

Many of us in Okinawa are determined to make the Henoko-Oura Bay Coastal Waters a true place of Hope, wishing to inspire other people to fight for their environment, human rights, and peace.

Hideki Yoshikawa is the Director of Okinawa Environmental Justice Project.