books Both Sides Now: The Myth of Media Objectivity

Objectivity may be tricky; fairness in reporting is not. The book author blasts the media for using a rhetoric of neutrality to marginalize insurgent POVs. Truth may be contingent on time and place, but leading news venues only serve power. 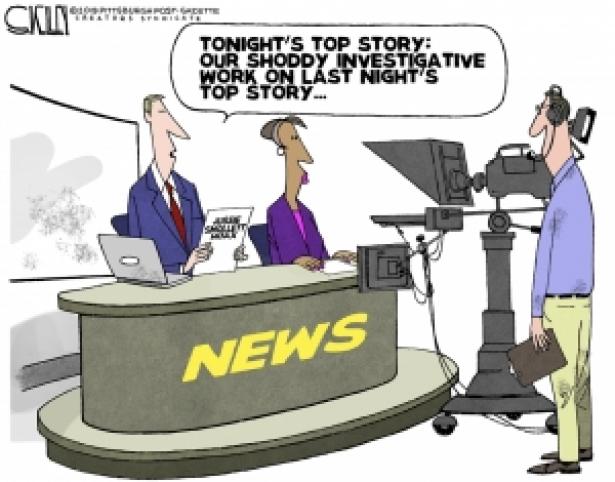 Shortly after Donald Trump’s inauguration, the journalist Lewis Raven Wallace posted a short piece on Medium with the provocative title “Objectivity is dead, and I’m okay with it.” In those first surreal days of the new regime, mainstream media outlets were reacting to Trump’s shock-and-awe tactics by doubling down on their own self-regard. Even as they rushed to normalize the new administration, news purveyors like the New York Times and NPR suggested that their own unbiased, verifiable content—in a word, their objectivity—was the best antidote to the president’s unchecked mendacity.

Wallace—who worked, at the time, as a reporter for the nationally syndicated public radio show Marketplace—disagreed. He questioned the liberal media’s insistence that journalistic objectivity was a noble aspiration, let alone an achievable goal, at a moment marked by grotesque injustice and escalating terror. Wallace used himself as an example. As a transgender writer, how could he possibly serve as an unbiased observer of political forces arrayed against his existence? Instead of striving for an impossible neutrality, he argued, journalists should be unapologetic about the political nature of their task. “As the status quo in this country shifts,” he wrote, “we must decide whether we are going to shift with it.” Wallace’s post circulated over social media and was spotted by his bosses at Marketplace. A few days later, he was fired. 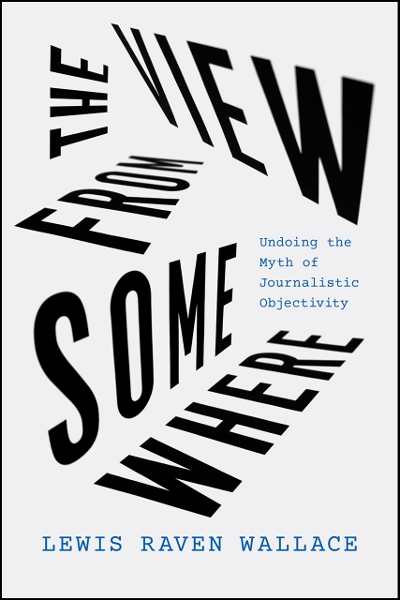 In The View from Somewhere, Wallace responds to his dismissal with a thoughtfully researched series of essays on journalistic objectivity, placing himself squarely on the side of the concept’s malcontents. While the tone of his original blog post was affirmative, emphasizing the role of the journalist as a public servant, his book paints an often damning picture of a news industry that uses the rhetoric of neutrality to serve the powerful. Historically and today, Wallace argues, media outlets have sought out the perspectives of writers unmarked by social difference or radical ideas, granting these perspectives the status of unfiltered reality and tagging writers outside this narrow frame as inherently biased. In times of crisis, he suggests, it should become only more obvious to us that this kind of sophistry amounts to moral failure.

In the early years of laboratory science in Restoration England, one method of establishing an experiment’s validity was to secure the presence of gentlemen witnesses. These self-appointed natural philosophers were not expected to possess special technical knowledge. In fact, as Donna Haraway writes, the ostensibly generic quality of their gaze—“modern, European, masculine, scientific”—was the whole point. For Haraway, the “modest witness,” whose social stature gave him the privilege to disappear into his observations, was key to the invention of scientific objectivity. When he wrote down his laboratory notes, “his narratives ha[d] a magical power—they los[t] all trace of their history as stories.” The View from Somewhere is in large part about the construction of the journalist as a kind of contemporary modest witness. Wallace’s own experiences with the slipperiness of scientific objectivity—he notes that he was diagnosed in 2005 with gender identity disorder, which would cease to exist as a medical category by 2013—help to inform his critique of media pieties. He shows how journalistic objectivity, a seemingly self-evident ideal with its own scientific aspirations, was in fact assembled gradually out of specific technical practices marshaled toward the maintenance of the status quo.

Wallace makes his case by carefully tracing the history of so-called objectivity in journalism. His story begins in the 1830s with the birth of the penny newspaper. Where newspapers had once been the organs of political parties and business interests, this new kind of mass-circulation daily, funded by advertising and pitched to a growing urban working class, was independent. But what did journalistic independence look like? For some newspapermen, it meant the freedom to engage in active political combat along the lines of principle rather than party affiliation. Horace Greeley, the legendary founding editor of the New-York Tribune, placed abolitionism at the center of the Tribune’s mission and disdained the “gagged, mincing neutrality” of outlets that took a less determined stance. But other nineteenth-century publications touted their impartiality and established the signposts that would come to announce as much: boundaries between the publishing and editorial sides of a newspaper, and between news and opinion sections; sourcing and fact-checking; the “inverted pyramid” structure of news stories, in which the most important information appears at the top (hence the injunction not to “bury the lede”). In the early twentieth century, this model became dominant as journalism professionalized. Early guides to journalistic ethics called for newspapers to model their craft on the scientific method, and they did.

Media outlets, Wallace writes, “adopted ‘objectivity’ first as an aspiration, but they transformed it too quickly into a bludgeon, a weapon to regulate who gets to tell stories.” When newspapers created rules against accepting bribes from sources, they protected the integrity of their journalism. But when they adopted policies forbidding conflicts of interest “real or perceived,” they got into the murkier territory of adjudicating the appearance of impartiality. The language of objectivity became a euphemistic way for outlets to dismiss reporting—and, crucially, reporters—that made them uneasy, often on the basis of race or gender. An 1894 New York Times editorial rewarded Ida B. Wells for her groundbreaking investigative work on lynching by calling her “a slanderous and nasty-minded mulattress.” In 1990, the Los Angeles Times media critic David Shaw could ask, with faux politesse, “Can Women Reporters Write Objectively on Abortion Issue?”

This double standard became particularly insidious in the hands of conservative media magnate Henry Luce. “Show me a man who thinks he’s objective, and I’ll show you a man who’s deceiving himself,” Luce remarked in 1923, when he cofounded Time. The idea that no one could be objective may at first glance appear democratizing, but in fact this kind of cynicism only exacerbated the problems with the discourse of journalistic neutrality, doubling down on the media’s gatekeeping function. If objectivity is both desirable and impossible, the role of the modest witness becomes rarefied, granted to or withheld from the job candidate at will. Journalistic objectivity, then, is a labor issue. In this kind of newsroom, Wallace argues, “the trick wasn’t to aspire to fairness, truth, and nonpartisanship—it was to not be caught by your boss being a human with opinions, especially if those opinions went against the grain in some way.”

This trap has been remarkably durable. I worked as a reporter from 2007 through 2010, and my modesty remained unquestioned until, near the end of my time as a staff writer at Tablet, a Jewish Web magazine then tacking sharply to the right, I was told a piece I’d written about Israeli American anti-Zionist college students would require dramatic revision because it had “an agenda.” I stood up for my own objectivity—the piece was properly sourced and featured dissenting voices and expert data—and my boss switched gears. “No one is objective,” she told me pityingly, as though it were the first day of class at a low-ranked J-school.

Something snapped in that exchange: the clubby mutual recognition of the strangeness of journalism and the people who perform it, straining toward the paradox of achieving objectivity through subjectivity like mad scientists. Suddenly all that was left was a wage relation, and because I was twenty-five and about to quit for grad school, I chose that moment to bring up my discovery that a junior male coworker was making a salary much higher than my own. My boss laughed and asked what recourse I thought I had. “You’re not in a union,” she said. Questions of journalistic independence and media organizing are inextricable, and Wallace’s book is in part a history of the latter, from the first known newsroom strike, in 1935 at the black New York paper the Amsterdam News, through a series of Supreme Court cases that have addressed speech protections for journalist organizers. Since the 1930s, Wallace reports, publishers have resisted journalists’ demands for union recognition in part through the astonishing claim that “union members could not be objective.” Sometimes the ruling class protests too much.

In Wallace’s telling, the ideology of journalistic neutrality in the US reached its apex during the liberal consensus of the postwar period, then suffered a serious blow during the Vietnam War, when even “the most basic facts” about the conflict were up for grabs. In the 1970s, right-wing think tanks and politicians took up the language of objectivity with a vengeance, systematically accusing media outlets of shilling for the Left and successfully pushing them to the right; public media outlets like NPR and PBS, which rely on insecure sources of government funding, have been particularly vulnerable to this kind of attack. As his story moves into the present, Wallace persuasively argues that collective action can remedy traditional reporting’s blind spots. Black Lives Matter, for instance, has transformed coverage of police brutality from local “crime” stories into inescapably political national news. He also draws attention to the work of lesser-known groups, like Indigenous Rising Media, working to develop reporting techniques that allow journalists to collaborate with marginalized communities rather than merely “extracting” their stories for consumption.

When it comes to the work of individual journalists, though, Wallace is too quick to treat “perspective” as something self-explanatory, emanating directly from a writer’s social position. In reality, a writer’s point of view consists of more than her relationship to structures of power; she crafts her ideas through her prose. The View from Somewhere profiles a range of exceptional journalists; perhaps my favorite was Sandy Nelson, a beloved lesbian socialist reporter at the Tacoma News Tribune who was reassigned to the copy desk when new management decided to punish her for doing activist work while off the clock (she sued, and her case made it to the Washington Supreme Court, which found against her). But because Wallace does not attend to an irreducible element of journalism—the writing—all his subjects wind up sounding a lot like Wallace. Ironically, the neglect of texture homogenizes the very diversity the book is meant to champion. Even a chapter on “Public Radio Voice” has almost nothing to say about voices, beyond basic observations about NPR’s whiteness; indeed, much of the book is itself written in public radio voice, sometimes lending it the quality of a podcast that has become sentient and begun to inquire into its own origins.

Come the revolution, what formal elements of news journalism’s objective style will we want to preserve, and where do we want to experiment? How can perspective be communicated in a way that acknowledges our entanglements, as Donna Haraway would put it, without self-reflection taking over? I would happily read a book that engaged with these questions; for now, the journalism must speak for itself.

Book author Lewis Raven Wallace is an independent journalist, a co-founder of Press On, a southern movement journalism collective, and the host of The View from Somewhere podcast. He previously worked in public radio and is a longtime activist engaged in prison abolition, racial justice, and queer and trans liberation. He is a white transgender person from the Midwest and is now based in North Carolina.