Cedric Richmond is a rising Democratic Party star and co-chair of Joe Biden’s Presidential campaign. The African American congressman is also one of the highest Democratic Party recipients of donations from the oil, gas and chemicals industries. 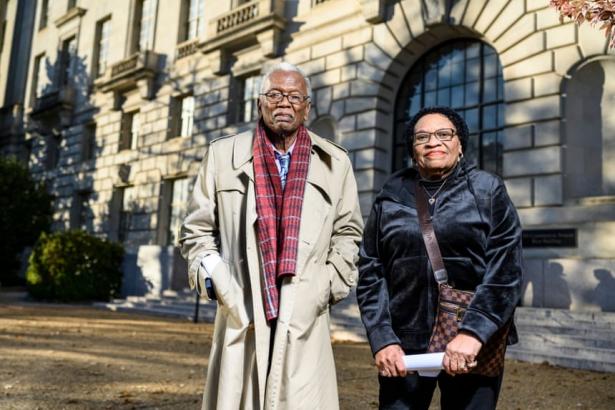 Mary Hampton and Robert Taylor drove 1000 miles to meet with their Congressman about the shocking prevalence of cancer in their hometown. “It was like he was trying to brush us off.”, Matt Roth/Earthjustice

The two had travelled 1,000 miles from Reserve, a town in southern Louisiana where, according to US government science, the risk of cancer is the highest in the country due to airborne toxins emitted by a nearby chemical plant. Hampton and Taylor have lost numerous relatives to the disease over decades, and blame the plant’s emissions of a compound named chloroprene, listed by the US government as a likely carcinogen.

Richmond, the 46-year-old congressman, has represented the residents of Reserve, and most of the people living in a densely polluted area between New Orleans and Baton Rouge referred to as Cancer Alley, for almost a decade. A rising star in the Democratic party, who now co-chairs former vice-president Joe Biden’s 2020 presidential campaign, Richmond is the lone Democrat in Louisiana’s delegation to Washington. He has won successive elections here campaigning on healthcare expansion, voting rights and criminal justice reform. A charismatic and chisel-jawed politician, he has seen his congressional seat in Washington turn into a Democratic stronghold in the deeply Republican south.

Hampton and Taylor say they were told that Richmond would sit down with them and hear about the years-long fight for clean air in their hometown. But they only got two minutes.

During their short interaction, according to Hampton, Taylor and one other present for the meeting, Richmond acknowledged community concerns over emissions from the plant, operated by the Japanese chemicals company Denka, and described them as a worry. Richmond then shifted the conversation away from his own advocacy and urged the residents to vote to remove Donald Trump from office.

The plant has been operating in Reserve, belching out chloroprene emissions sometimes hundreds of times above the EPA’s suggested exposure limit, since 1968, spanning four Democratic presidencies and six Republican.

Reserve, a majority African American working-class neighborhood, is the center of a year-long Guardian series, Cancer Town, examining local residents’ fight for environmental justice in an area where the risk of cancer is 50 times the national average, according to the EPA.

After posing for a quick photograph, where he smiled and placed his hand on Mary Hampton’s left shoulder, Richmond began to exit. As he was leaving, the congressman was asked: “How about writing them [Denka] a letter?”“There have been letters,” he said, according to one of those in the room. And then he left, leaving Hampton and Taylor to hold a 20-minute meeting with an aide from his office.

The congressman, who declined interview requests, also declined to provide evidence of correspondence related to the plant. He also declined to answer a list of detailed questions despite multiple requested deadline extensions. Shortly after receiving the Guardian’s questions, Richmond’s communications director, Jalina Porter, blocked both authors of this article on social media.

“We reached out to him [Richmond] when we first started this fight three years ago,” said Taylor, who has lost his mother, sister and nephews to cancer, while his wife is currently fighting the disease, and his daughter battling a rare intestinal disease linked to chloroprene. “One of his guys came to our first meeting but he never offered any help. Since then it’s been zero.”

Richmond’s stature in the Democratic party has grown during his 10 years in Congress, as he has pushed on traditional civil rights issues, coastal erosion in Louisiana and fought for funding following natural and industrial disasters in the state. But the congressman, one of the highest recipients of donations from the oil, gas and chemicals industries in the Democratic House caucus, has paid little public attention to perhaps the most internationally pressing issue in Louisiana’s second congressional district – the continuing proliferation of polluting petrochemical and fossil fuel plants in the region.

Seven of the 10 most air-polluted census tracts in America sit in his district, according to EPA data. While a proposed massive expansion of a plastics factory in his district could almost double the amount of toxic air pollution in the parish it will be constructed in.

Analysis of Richmond’s news releases shows he has not mentioned air pollution in his district at any point during his tenure. An examination of congressional records, suggests he has not spoken about the issue in Congress.

His record stands in contrast to the growing call among Democrats in Washington to address environmental justice issues in Richmond’s district. The US senator and presidential candidate Cory Booker has introduced sweeping legislation, with reference to communities in “Cancer Alley”, that would bolster federal regulation of clean air and water, and clarifies the legal rights of communities in polluted areas. Senator Elizabeth Warren has also placed Reserve at the centre of an ambitious environmental justice pledge in her run for the White House.

Richmond declined to answer whether he supported the Senate bill.

“I’ve been working in his district every year that he’s been a congressman, and I’ve never seen his face or any of his staff members in the communities working on these [industrial pollution] issues. It’s simply not on their radar.” said Anne Rolfes, executive director of the Louisiana Bucket Brigade, a not-for-profit environmental justice organization.

Rolfes said Richmond could lobby for stricter regulation and enforcement and push federal agencies to conduct more environmental reviews on new polluting projects, but instead “he’s missing in action.”

There have been signs of tentative progress in Reserve in the past six months. The Louisiana state environment agency, LDEQ, has moved towards legal action against Denka, the Democratic governor, John Bel Edwards, has commissioned a health study in the area. But these have happened at the local level, seemingly without intervention or comment from Richmond.

Still, the financial weight of major polluters in Louisiana politics is substantial. During almost a decade in Congress Richmond has taken over $400,000 in campaign donations from the oil and gas industry and chemical manufacturers, according to an analysis conducted by the non-partisan Centre for Responsive Politics at the request of the Guardian.

According to FEC filings reviewed by the Guardian, Richmond has also taken two donations, one in February 2015 for $1,500 the other for $1,000 in May 2017, from the affiliated Pac of a legal firm representing Denka’s lobbying efforts at the EPA. (Denka is appealing against the EPA’s independently peer-reviewed classification of chloroprene as a likely carcinogen.) The firm, Bracewell LLP, began lobbying for Denka in March 2017.

The congressman receives moderate marks from one environment group that scores lawmakers – he has a 74% lifetime score from the League of Conservation Voters.

But his ranking plunged during the campaign season in 2018 – to 46% – when he missed votes on 15 environment-related bills, nearly half of the 35 votes tracked. Richmond declined to comment on why he missed those votes.

Richmond often sides with Democrats on environment issues, with some exceptions involving the oil and gas industry – which is politically critical in Louisiana. He backed legislation that experts said would undermine environment reviews for liquefied natural gas infrastructure. He was among roughly two dozen Democrats to side with Republicans and vote for the Keystone XL pipeline in 2015.

In 2019, he voted to allow oil drillers to explore the Atlantic coast – including by using seismic airgun blasting. But he voted to block them from drilling on the outer continental shelf of Florida.

Nonetheless, Democratic analysts in the region argue Richmond has maintained a strong grassroots base in his district through championing issues in Congress including police violence, investment in housing, infrastructure and education.

Silas Lee, a Democratic pollster in Louisiana also working with the Biden campaign, argued that the fact that Richmond has been re-elected over five cycles is “indicative of delivering for his constituents and responding to the needs of the congressional district”.

Lee said the high levels of donations from fossil fuel and chemicals companies are simply a reflection of the industry’s importance to the state’s economy. “It’s just the nature of politics and where you represent,” Lee said. “He can receive contributions but the bottom line is you have to be accountable to your constituents.”

Although Richmond’s district, now 62% African American, has traditionally been associated with centrist Democrats, redistricting in 2014 has made it a Democratic stronghold. Richmond has not faced a Republican challenger since 2012, and in his most recent election last year was not even challenged by a Democrat.

The congressman has partly kept hold of power due to his ability to vastly outspend his rivals, thanks in large part to corporate donations. But he has also kept the state’s Democratic establishment firmly onside.

In addition to declining to comment for this story, Richmond’s office refused to share a complete staff list disclosing who works for him in Washington and Louisiana, as well as on his re-election campaign.

One Richmond staffer, who is not listed on the congressman’s website, was convicted of wire fraud before joining the team.

In 2015, according to records on social media, Richmond hired James M “Tres” Bernhard III, son of Jim Bernhard, the founder of Louisiana’s influential Shaw Group and the former chair of the Louisiana Democratic party, who has reportedly considered a bid for governor.

Tres Bernhard, who is a senior aide who directs “special projects” from Baton Rouge, was in 2013 sentenced to 27 months in federal prison for committing wire fraud and diverting nearly $500,000 from his former law firm to himself. He had previously settled a civil lawsuit that alleged he sold invalid movie tax credits and used the proceeds for his personal gain. He was permanently disbarred as a lawyer.

Richmond’s office confirmed Bernhard’s employment and declined to comment on his background.

Both Mary Hampton and Robert Taylor described their recent interaction with Richmond as another moment they have felt let down by their elected officials. Both have voted for the congressman in successive elections.

Hampton, who has lost her brother, sister-in-law and daughter-in-law to cancer that she blames on the plant, said: “Nobody from our local government has made an attempt to help us or show us the way.

Cancer Town: A year-long Guardian series from Reserve, Louisiana, where the risk of cancer is 50 times the national average for the United States. This series of reports will ask what residents have to do to win the right to a safe environment for their children.