In Schleuss’s view, there is no substitute for “members standing up in the newsroom, arm in arm,” as LA Times staffers did during their three-year struggle for union representation and a first contract covering 475 workers 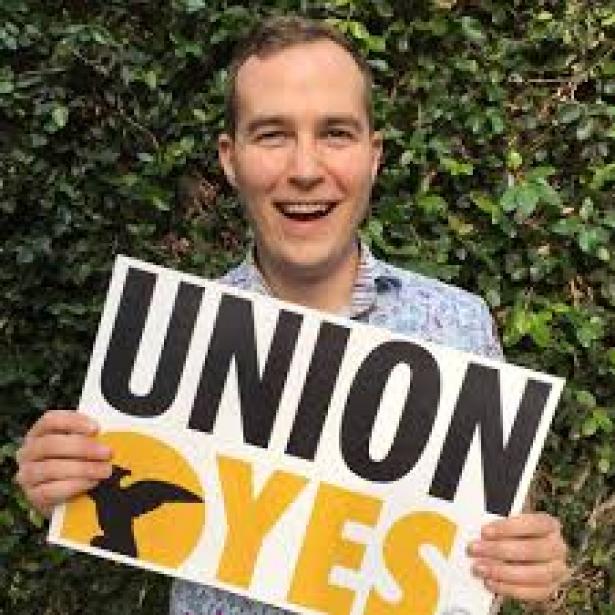 After a much contested election process, the largest union of journalists in North America has chosen a 32-year old reporter at the Los Angeles Times to be its new leader, in the U.S. and Canada.

In the first round of balloting last Spring, Lunzer beat Schleuss by a margin of 261 votes out of 2,300 cast. With backing from many upset members, Schleuss challenged those results, based on election irregularities.

To avoid a further appeal to the U.S. Department of Labor, the NewsGuild  ordered a re-run, with voting overseen by the American Arbitration Association,  a neutral third party. When the AAA completed its tally in New York City on Tuesday, Dec. 10, Schleuss emerged as the victor, receiving 1,979 votes vs 1,514 for Lunzer.

The challenger’s stronger showing this time was partly the result of more Guild members participating in their union’s unusual one member/one vote system of electing top officers.  Overall turnout increased by more than 15%.

Schleuss, a data and graphics reporter, also benefited from a flurry of new endorsements. He was backed by past Guild officials, including former president Linda Foley, key Canadian Guild members, and activists at newspapers in New York, Philadelphia, Washington, Chicago, and Indianapolis.

In her statement of support, Foley recalled that she was once part of a generational challenge to older Guild leaders in the mid-1990s—who similarly opposed her bid to become the union’s first female president because of her alleged lack of “experience.” Foley lauded the role played by Schleuss and his co-LAT workers in a unionization campaign which helped “inspire and empower a new generation of journalists and media workers.”

Foley believes that, as Guild president, Schleuss will promote “more organizing and a collective bargaining program to give members real voice and power” in a “news industry fraught with problems and promise.”

Schleuss will now also replace Lunzer on the international executive board of the Communications of Worker of America (CWA), a much larger AFL-CIO affiliate that includes 20,000 NewsGuild members. Among the highlights of the Guild presidential campaign was a debate between Lunzer and Schleuss that will hopefully create a precedent for candidate debates in other CWA internal union elections.

Debates may be a familiar part of campaigning for public office. But, within a supposedly democratic labor movement, they are fairly rare. For example, very few CWA local unions ever host candidate forums, where members can listen to and question competing candidates for local officer or executive board positions.

Higher up in CWA, contested elections for national officers and regional vice-presidents are decided by union convention delegates, not rank-and-file voting. Unfortunately, there is no tradition or requirement of candidate debates at CWA conventions either.

During two past races for CWA Executive Vice President and Secretary-Treasurer (that I was personally involved in) neither of the candidates who were executive board incumbents deigned to face their challengers—a practice continued by Lunzer when he initially spurned a debate proposed by Schleuss.

After Schleuss ran strongly in the first Guild election and a re-run was ordered, Lunzer still avoided any face-to-face exchange, in the front of a live membership audience. But he did agree to a joint conference call with his opponent that was moderated by retired CWA President Larry Cohen. On October 26, many Guild members were able to listen in and submit questions—either in advance or by text and email during the debate itself.

For ninety minutes , Lunzer and Schleuss fielded questions about their respective records and plans to strengthen Guild organizing, bargaining, and membership mobilization. Lunzer argued that his four decades of local and and national Guild leadership had long produced concrete results, like 4,000 new members being organized in recent years.

Schluess insisted that there was still much “need to reform and modernize the union,” which has faced stiff “new media” organizing competition from the Writers Guild of America-East.

Among the other challenges discussed was how to boost membership in the Guild’s “open shops” at the Washington Post, Bloomberg/BNA, and Associated Press; how to encourage more free-lancers to join the Guild (as three of its local unions already permit them to do); how to recruit more non-journalists who work for non-profit groups (the Guild already has about 1,000 members of this type); and how to respond more effectively to newspaper industry restructuring and ownership changes.

This last threat looms large in the daily work lives of many media workers, particularly the 1,100 Guild members in 33 bargaining units likely to be adversely affected by the pending merger of GateHouse Media and Gannett, Inc.

In a recent letter to the CEOs of Gannett and New Media Investment Group, which owns GateHouse, ten U.S. Senators expressed deep concern that management’s drive “to increase profits and shareholder value,” via post-merger cost-cutting, will result in further “hollowing out of newsrooms” and reduced local news coverage.

Both Lunzer and Schleuss agreed that the Guild must wage stronger labor-community fights against newspaper take-overs by “hedge-fund owners intent on looting the place and destroying journalism,” as Schleuss put it. To do that, the re-run election winner said he would seek more resources from the CWA national union and new ways of “tapping the creativity of the members” in stepped up contract campaigns.

In Schleuss’s view, there is no substitute for “members standing up in the newsroom, arm in arm,” as LA Times staffers did during their three-year struggle for union representation and a first contract covering 475 workers.

As Guild president for the next four years,  Schleuss will now have to encourage–on a much larger scale–the same kind of rank-and-file initiative and grassroots organizing that turned his own paper into a union shop—and then fueled his successful challenge to Lunzer.

Support CounterPunch: we have all the right enemies.