All of those funded by the N.C. Heritage PAC are known for being staunchly conservative. And some have openly aligned themselves with SCV's goals. 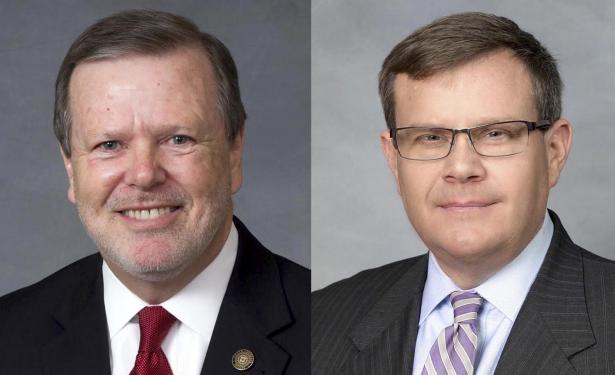 In July 2015, one month after the massacre of nine Black parishioners inside Charleston's Mother Emmanuel Church by a Confederate flag-waving white supremacist sparked a new national debate over Confederate iconography in public spaces, the Republican-controlled state legislature in neighboring North Carolina passed the Cultural History Artifact Management and Patriotism Act.

The law prohibits the removal from public spaces of monuments, memorials, or works of art owned by the state without approval by the N.C. Historical Commission. The message was clear: Even though symbols of the Confederacy evoke white supremacy and the enslavement of Black people for many, the North Carolina legislature's primary interest was in protecting the nearly 100 monuments to the Confederacy across the state.

With that win for its cause under its belt, the N.C. Division of the Sons of Confederate Veterans (SCV) soon began plotting how it could build political power in the state. According to minutes from its August 2015 meeting, the 501c3 charitable nonprofit voted to start a 501c4 "social welfare" nonprofit for the purpose of creating a political action committee that would be able to contribute to candidates' campaigns.

Organizational paperwork filed with the N.C. State Board of Elections shows the North Carolina Heritage PAC was established on Jan. 6, 2016. It listed as its treasurer and custodian of its books Thomas Smith, the former so-called "commander" of the SCV's N.C. Division. According to its mission statement, the PAC is dedicated to "supporting diverse efforts to defend and preserve the heritage, traditions, monuments, cemeteries, flags, emblems, and other legacies of North Carolina history against those efforts to remove, deface, legislate against, alter, or otherwise corrupt or pervert their meaning, history, presentation and standing in our state."

That year the N.C. Heritage PAC endorsed 14 candidates running for the legislature, council of state, attorney general, and various judgeships. It also made a total of $5,000 in political contributions to four candidates, all of them Republicans:

Berger, Moore, and Brown all ran unopposed that year in both the primary and general election, while Troxler defeated a single opponent in both.

The N.C. Heritage PAC dramatically increased its spending in the 2018 cycle to $16,500, supporting a total of 13 candidates. It again backed Berger and Moore, this time at $1,500 each. It also contributed a total of $2,000 each to state Reps. Larry Pittman and Michael Speciale; $1,000 each to state Sens. John Alexander and Carl Ford and state Reps. David Lewis, John Sauls, and Mitchell Setzer; and $500 to state Reps. Jerry Lee Carter and Julia Howard.

All of those funded by the N.C. Heritage PAC are known for being staunchly conservative. And some have openly aligned themselves with SCV's goals.

For instance, Berger and Moore have supported legislation to protect Confederate monuments and have referred to anti-racist protesters who have torn them down as "mobs." Pittman, Setzer, and Speciale have attended receptions hosted by the SCV. Pittman and Speciale have even gone as far as to co-sponsor a bill that would remove the ban on secession from the state constitution. And as the head of the state fair, Troxler has allowed the SCV to maintain a vendor booth at the event despite controversy over its presence.

The N.C. Heritage PAC appears to be the only one like it currently operating in the South. A group called the Georgia Heritage Coalition gave $1,200 to four campaigns in that state in 2000 but has not contributed to any since. Likewise, the South Carolina Heritage Coalition contributed $1,200 to four campaigns in 2000 and 2002 but does not appear to have been active since then.

SCV is currently in the spotlight in North Carolina because of the controversial $2.5 million payment it's set to receive from the University of North Carolina to take the "Silent Sam" Confederate monument that stood in a prominent place on the Chapel Hill campus until protesters tore it down last year. That settlement, which is facing a legal challenge, was negotiated by the university's Board of Governors, who in turn are appointed by the legislature.

Rebekah Barber is a research associate at the Institute for Southern Studies and writer for Facing South.