The Mandalorian is uninterested in diapers, and so Mando gets to be a very particular image of fatherhood: the guy who doesn’t have to sweat the small stuff. It’s wish fulfillment, a fantasy of parenting stripped of all detail and specificity. 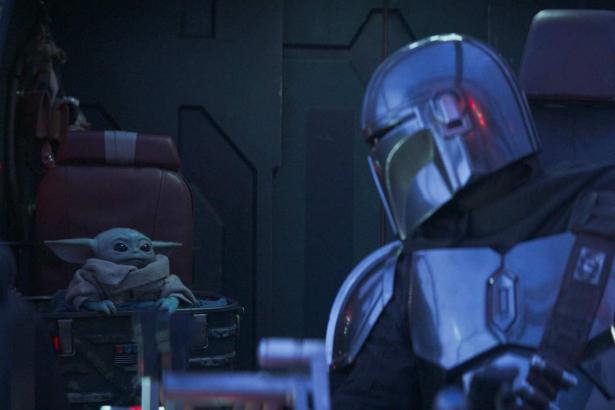 Like many installments in the Star Wars franchise, The Mandalorian is a story about parenting. Its contours are different than most other Star Wars stories, though: The movies are concerned with parenting in the later stages, parenting that’s worried about passing along ideologies, trying to make your kids into good people, and what to do when your parents are not the people you hoped they’d be. The relationship between Obi-Wan and his failed student Anakin is about betraying one’s parenting; Leia mourns for what’s happened to her son Kylo Ren; the mystery of Rey’s absent parents has in large part defined the most recent movie trilogy, for better or worse.

But The Mandalorian is about a much earlier stage of parenting. When Mando finds the Child, more commonly known as Baby Yoda, stashed in a heap of stuff inside an enemy lair, the series becomes about being the working parent of a toddler. It’s the stage of parenting where you think, “How am I going to do my work while keeping this small thing from killing itself?” and “What does it eat?” and “Who is this toddler I’m carting around the universe all of a sudden?” The way The Mandalorian tells this parenting story is undeniably appealing — that baby is so cute! — but I was also consistently frustrated by the parts of the story that are left unseen.

The Mandalorian is a beautifully detailed show. There’s a tactile solidness to its settings. Mando’s ship clunks and pings in a convincingly physical way. Minor characters carry wicker baskets full of bright-blue shrimp. Dust from the alien desert gets everywhere, and dusty aliens look like they really evolved in those places. But all the appealing detail around the show’s margins — the culture of a forest bar, the Ripley-esque hairdo worn by Amy Sedaris’s character, the astonishing way an R2 unit unfolds into a leggy gondolier — vanish when the focus turns to the two figures at the heart of the series. There’s Mando, whose life, personality, preferences, desires, and physical capacities are all sketchy, even after the finale fills in some flashback-y details. And then there’s Baby Yoda, whose name isn’t even Baby Yoda, and about whom we still know almost nothing. Baby Yoda is about 50 years old, has the Force, likes to eat frogs, and enjoys playing with a silver ball. Aside from that? The Mandalorian offers us a shrug.

When the series first premiered, Vulture writers put together a list of questions about Baby Yoda, most of them in jest. Does Baby Yoda wear diapers? How will Mando get Baby Yoda to sleep? How fast will Baby Yoda develop? Will Baby Yoda learn to speak the Mandalorian’s language? Yes, they’re goofy questions — except, in a story about becoming the unexpected guardian of an unfamiliar toddler, those small-scale concerns are precisely the ones that would derail the Mandalorian’s day. That’s the stuff that would balloon into epic frustration and let us see Mando as a person, his character defined by the way he reacted to the mundane obstacles of parenting.

But The Mandalorian is uninterested in diapers, and so Mando gets to be a very particular image of fatherhood: the guy who doesn’t have to sweat the small stuff. As a bounty hunter, Mando is constantly beset by laser pew-pews and ravenous beasts — life, after all, is hard. But his life as a parent is unsullied by any of the details that make parenting hard. That stuff, I guess, is too boring to be in a Star Wars story. But its absence means that the central relationship of the show feels threadbare.

The season finale does try to fill in those details, at least for the Mandalorian, who was orphaned in his own childhood and adopted into the Mandalorian foundling system. “Redemption” makes clear that he has not considered himself a real parent figure to this child up until the ending, when he finally accepts that he and Baby Yoda are bound together by their foundling status. It’s an excuse-making kind of finale — none of this has been real up until now, so the gaps in its portrayal of Mando as a caretaker don’t really count. But that doesn’t square with the way the story has unfolded up until this point.

Almost immediately upon fleeing Nevarro with Baby Yoda, the Mandalorian seeks refuge on a planet where he can stash him away with someone else, a woman named Omera with zero characterization except that she is a good, protective mother. They’re with that community for long enough for Baby Yoda to bond with other children, but The Mandalorian skips over all of those details, because the stuff it’s interested in are the big AT-AT battles and bar fights. When that community doesn’t work, Mando moves along to other caretakers, eventually settling on the newly reprogrammed IG-11, now known as a Nurse Droid, who’s there as a catch-all parenting fill-in, carrying Baby Yoda around in a convenient baby-wearing pouch and placing the child’s needs above all else. But he’s not the protagonist of this show — he’s there to absorb all the things Mando doesn’t have time to deal with. And then, as if the show hasn’t already demonstrated how disposable the caretaker figures are, he’s sacrificed for everyone else’s safety. It’s a moving moment in the finale, but it’s also a clear way to define what The Mandalorian sees as indispensable and what can be replaced. The one who was actually carrying the baby around? Ultimately not that important, apparently.

Thinking about the gaps in the way The Mandalorian depicts parenthood, I kept getting hung up on episode five, when Mando leaves Baby Yoda in the care of Peli, the mechanic played by Amy Sedaris. After he comes back from an excursion, Mando charges into her garage, waking Baby Yoda abruptly. “You woke it up!” the mechanic chides Mando. “Do you have any idea how long it took me to get it to sleep!?” It’s a silly throwaway line, meant to be a cute parenting note about how hard sleep is for all babies; I thought about it for weeks afterward. Has the Mandalorian been cradling this baby to sleep each night for four full episodes, unseen in the underbelly of the Razor Crest? Is Baby Yoda so bonded to the Mandalorian now that he sleeps readily when he’s with Mando but was anxious when left with Peli? Why would this little line be in this TV show at all if The Mandalorian weren’t conscious of itself as a story about unexpected parenting? As a gesture toward all the stuff that’s missing, how could this jokey line ever be sufficient?

The thing is, it doesn’t have to be sufficient, and The Mandalorian doesn’t need to do more than gesture toward all the things it’s elected to leave behind. Until the more eventful last two episodes of the season, the rhythmic push of each installment is a faceless father figure just trying to find reasonable child care for his impeccably cute infant, over and over again. He still has to meet the baseline standards of care, but he can do it without fretting about the minor details that get in the way. It’s wish fulfillment, a fantasy, a vision of parenting stripped so thoroughly of all detail and specificity that all that’s left are archetypes: the parent, the child. The sense of mystery as the child comes into its power. The threats to their safety. The bond between them.

And archetypes are nice, but they’re also purposely, fundamentally empty; sketches left bare so that the details can get filled in later. The Mandalorian could’ve been a better show if it’d stopped for just a moment to let Mando care about the diapers, to fill in those details with the same care it’s filled out so much of its world. Maybe in season two he’ll stop off at a planet with a daddy playgroup.