We’re Failing To Prepare Our Children for the Climate Fight

Most schoolchildren get only an hour or two of climate education per year. It’s up to their parents to teach them optimism and action in the face of a daunting crisis. 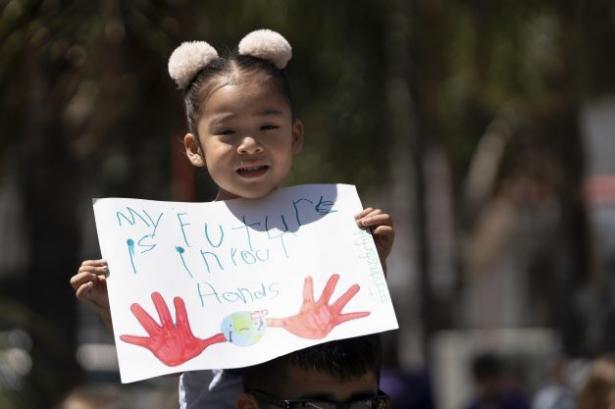 A child holds up a sign saying, “My future is in your hands” during a climate demonstration in Los Angeles.,Ronen Tivony/SOPA Images/Lightrocket // The New Republic

Climate change is hurtling forward at frightening speed. And the American K-12 system still isn’t remotely prepared to teach children about what they’ll soon face. Today, the majority of students in U.S. schools get between zero and two hours of instruction per year about climate change—hardly enough time to discuss the political, cultural, and environmental ramifications of greenhouse gas emissions, let alone make space for the emotions elicited by such an existential threat. In some districts, climate education is actually disinformation, as teachers rely on materials created by the fossil fuel industry to mislead children on the origin of the problem and our possible futures.

The obstacles to quality climate education are manifold, according to Miseducation: How Climate Change Is Taught in America, a recent book-length investigation by journalist Katie Worth. Surveys suggest a majority of K-12 teachers in the United States still believe that scientists disagree about the anthropogenic origin of climate change, encouraging skepticism to seep into the classroom. Many districts rely on old, outdated textbooks that tend to minimize the crisis, if they touch on global warming at all. And teachers who support climate education in one classroom may find their work undermined by “skeptics” teaching the same kids later in the day.

There are signs of progress. As of 2019, for example, 86 percent of Americans agreed that climate change should be taught in school in some form. But just having a working knowledge of the carbon cycle would be insufficient for kids today, says Mary DeMocker, author of The Parents’ Guide to Climate Revolution. If we only teach kids the facts about the present crisis, “we’re burdening them with science in a way that’s fatalistic,” she told me. To foreclose solutions and sidestep politics is like saying, “Here, let us help you cultivate some resilience for your dismal future.” The real solution lies elsewhere—in radically redefining the priorities of American, and in particular, white American, parents, teachers, and other caretakers. Instead of preparing children for the workforce or to reach higher standards of living than the last generation, we need to support young people in cultivating both “resilience and resistance” for one of the toughest challenges humanity has ever faced, DeMocker says. In the process, the rest of us might also reap some of these qualities for ourselves.

In Lydia Millet’s 2020 novel, A Children’s Bible, a teenage narrator named Eve decides to do the thing she dreads most and inform her younger brother about climate change. “I have to tell you a new story now,” she begins. “But a real one. A story of the future, Jack.” The adults were greedy, the world is imperiled, and (so far) it’s only getting worse—you’ve heard this one before. But for Jack it is new and heart-breaking. “Later he wiped his eyes and squared his thin little shoulders,” Eve tells us. “My Jack was a brave boy.”

The parents in this book, as might be expected, are terrible. They drink and avoid the catastrophe unfolding before them; when avoidance is no longer an option, they drink more and despair. A hurricane hits, and it’s the kids who respond swiftly and smartly, eventually bringing (almost) everyone to relative safety. It is, in part, a parable, a story out of space and time. But A Children’s Bible is also a painfully familiar representation of the pressure young people feel to save the world—and the sense that adults have failed to join the fight.

A handful of picture books have emerged in recent years to help parents and educators teach kids about the climate crisis, from The Fog by Kyo Maclear (a metaphor for global warming) to The Polar Bears’ Home by Lara Bergen (a straightforward Arctic explainer). There’s also an expanding field of nonfiction writing to help adults process their feelings—and support the next generation of climate leaders. “As parents, we should be aware of this and try to repair that sense of betrayal that young people have toward older generations,” Britt Wray, the Human and Planetary Health Fellow at Stanford University and the London School of Hygiene and Tropical Medicine and author of the forthcoming book Generation Dread: Finding Purpose in a Age of Climate Crisis, told me. “That’s why the truth is so important.”

Children today grow up knowing the stakes and mourning the injustice. Adults need to supply them, at bare minimum, with the means to act on those feelings.

The difficulty of teaching children about climate change mirrors this divide in the literature: Kids can get their hands on the raw materials, but if parents and educators lack frameworks for processing their own feelings about the crisis and channeling them into substantive action, where can their children’s knowledge and natural concern really go? While kids will be affected by climate change for the rest of their lives, they can’t vote or, in most cases, drive themselves to climate rallies, DeMocker says. As the founder of 350 Eugene, a local chapter of Bill McKibben’s international grassroots climate justice movement, DeMocker organized events for community members about how to address these problems locally. She found parents were uniquely suited to help, as they are invested in a long-term future for their kids but have the wisdom and legal rights their children lack—they just needed actionable advice. So DeMocker decided to keep a list, which ultimately grew to more than 100 items, all detailed in the The Parents’ Guide to Climate Revolution.

DeMocker’s morsels are many and varied, ranging from old standbys like planting trees to more aggressive plans for suing polluters—inspired, in part, by the plaintiffs in the Juliana v. United States case, six of whom are from Eugene. While kids are sure to encounter the climate crisis from friends, in classrooms and museums, and through popular media, and their questions deserve honest, age-appropriate answers, DeMocker believes parents should initially place the emphasis on fostering inner strength. “We need to protect [children’s] imaginations and we need to protect their hearts until they’re strong enough, when they’re teens, to really take on this crisis on this intellectual level,” she says.

As kids get older, what they know about the crisis will multiply and deepen. In the United States, many activists have been desperate merely to get people to “listen to the science” on climate change. But actually understanding that science—and being able to explain it to others and formulate plans of action based on it—would be even better, especially for kids who will never know a life without its effects. Even so, this most basic education must be done with sensitivity. One of Worth’s classroom visits, described in Miseducation, is useful here. Amid numerous stories of children failed by their schools, Worth describes how Kristen Del Real, a sixth-grade science teacher in Chico, California, has designed a resilience-minded course for her students. First, the 11- and 12-year-olds will learn about geological time. Then they observe how legume sprouts turn nitrogen into nutrients. Units on atmosphere, solar radiation, the greenhouse gas effect, and the weather system follow. “Once all those pieces are in place,” Del Real said, “when we get to global warming, the kids will just get it.”

Crucially, Del Real’s lessons don’t stop there. The final month of the school year in Del Real’s class is spent on “solutions projects,” where small groups of students apply their knowledge to develop proposals that will help solve the crisis—the most important step of all. “Usually, by the time they get to the solutions project, even the doubters understand the implications of a changing atmosphere,” Worth writes, “and [they] are eager to dream up answers.” The goal is to keep kids from getting crushed by the weight of the world and to work to ensure they’re actually up to the task of improving it.

I first learned about climate change in middle school, when our science teacher played a newly released documentary, An Inconvenient Truth. But I didn’t feel the climate crisis for another decade, when I began researching a project on changing rain patterns in the northeastern U.S. It’s not an overstatement to say that seeing the historic data change—and watching the projections extend out over the twenty-first century—eventually changed the course of my life and career. People younger than me don’t have the privilege of such a long learning curve; with apocalypse around every corner, a personal engagement with the science, let alone the history or politics of climate change, now follows the feelings of fear and grief prompted by the crisis. Children today grow up knowing the stakes and mourning the injustice. Adults need to supply them, at bare minimum, with the means to act on those feelings.

As a childless 25-year-old, I look back on my own climate education and feel as though I’m straddling two climate generations: those older than me, for whom disastrous change has (incorrectly) felt like a foregone conclusion, and the kids younger than me, for whom any change is (rightly) treated as meaningful progress. On September 20, 2019, for example, at the climate strike in New York City, I watched Jaden Smith and Willow perform and various speakers, including Greta Thunberg, take the stage. At some point, someone—I don’t remember who—spoke about how we, the crowd, would keep fighting no matter what, because 1.5 Celsius was better than two, but two was better than 2.5, and 2.5 was better than three. It was an obvious scientific fact, and yet as someone raised to think of even two degrees of warming as almost unthinkably catastrophic, I’d never felt it. But the teenagers around me, in their bucket hats and tank tops, nodded knowingly—they’d believed it all along. They’d come of age knowing the world is probably going to overshoot 1.5 degrees of warming—maybe even two. And they have every reason to fight for every fraction of a degree.

What black-and-white, all-or-nothing thinking are you employing? Where is fatalism about the future holding you back?

To me, this moment revealed an important truth about what climate education really requires. Supporting kids as they face an endangered world requires adults to relocate their own optimism and reengage in the fight. “I’ve seen a lot of these articles on ‘how to help your kid with eco-anxiety,’ as if the parent isn’t also in the world,” Wray tells me. But children and their caretakers feed off each other’s emotions, and children rely on their caretakers to help them process complex feelings. When it comes to parenting, teaching, or otherwise supporting a child, “a key part of doing this well is doing your own inner work and investigation,” Wray says. What black-and-white, all-or-nothing thinking are you employing? Where is fatalism about the future holding you back? What more can you be doing to build community?

These questions may, at times, be painful to ask. But Wray is confident they can help everyone work toward a better future. Parenting “with purpose and really committing to the joy of it—rather than fearing what may come—has an effect on your orientation toward what life is made of,” Wray tells me. If it takes a village to raise a child, then holistic, heartfelt climate education can and should change the village itself.