Political positions on class warfare don't always run parallel to positions on military warfare. But they have now clearly aligned in the race for the 2020 Democratic presidential nomination. 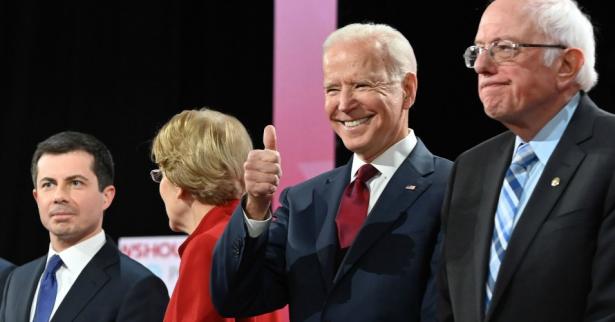 There's nothing like an illegal and utterly reckless U.S. act of war to illuminate the political character of presidential candidates. In the days since the assassination of Iran’s top military official, two of the highest-polling Democratic contenders have displayed the kind of moral cowardice that got the United States into—and kept it in —horrific wars from Vietnam to Afghanistan and Iraq.

Eager to hedge their bets, Joe Biden and Pete Buttigieg have offered merely tactical critiques of President Trump’s decision to kill Qassim Suleimani. In sharp contrast to Elizabeth Warren and especially Bernie Sanders, the gist of the responses from Biden and Buttigieg amounted to criticizing the absence of a game plan for an atrocious game that should never be played in the first place.

Many journalists have noted that only in recent days has foreign policy become prominent in the race for the 2020 nomination. But what remains to be addressed is the confluence of how Biden and Buttigieg approach the roles of the U.S. government in class war at home and military war abroad—both for the benefit of corporate elites.

"In sharp contrast to Elizabeth Warren and especially Bernie Sanders, the gist of the responses from Biden and Buttigieg amounted to criticizing the absence of a game plan for an atrocious game that should never be played in the first place."

Let’s be clear: More than 50 years ago, when Martin Luther King Jr. bravely condemned “the madness of militarism,” he was directly challenging those who included the political ancestors of the likes of Buttigieg and Biden—Democratic politicians willing to wink and nod at vast death and destruction, courtesy of U.S. taxpayers, equivocating while claiming that the war machinery would operate better in their hands.

On war-related issues, Buttigieg’s rhetorical mix offers something for just about anyone. “Mr. Buttigieg is campaigning as an antiwar veteran,” the New York Times oddly reported in a Jan. 5 news article. Yet on the same day, during a CNN interview about the drone killing, Buttigieg functioned more as a war enabler than opponent.

In response to anchor Jake Tapper’s first question—“Are you saying that President Trump deserves some credit for the strike?”—Buttigieg equivocated: “No, not until we know whether this was a good decision and how this decision was made, and the president has failed to demonstrate that.” His elaborations were littered with statements like “we need answers on whether this is part of a meaningful strategy.”

As for Biden, in recent months his shameful war-enabling history has drawn more attention while he continues to lie about it. And—given how hugely profitable endless wars have been for military contractors—Biden’s chronic enabling should be put in a wider context of his longtime service to corporate profiteering on a massive scale.

Biden has no interest in discussing his actual five-decade history of serving corporate power, which can only discredit the renewed “Lunch Bucket Joe” pretenses of his campaign. Meanwhile, as Buttigieg gained in the polls amid a widening flood of donations from Wall Street and other bastions of wealth, he moved away from initial claims of supporting such progressive measures as Medicare for All.

The military-industrial complex, inherently corporate, needs politicians like Biden and Buttigieg. One generation after another, they claim special geopolitical (Biden) or technocratic (Buttigieg) expertise while striving to project warm personas in front of cameras. The equivalents, one might say, of happy-face stickers on corpses.

Days ago, Bernie Sanders summed up: “I know that it is rarely the children of the billionaire class who face the agony of reckless foreign policy, it is the children of working families.”

One of the many reasons I’m actively supporting Sanders for president is that (although hardly flawless) his track record on military spending, war and foreign policy is much better than the records of his opponents.

Devastating impacts of nonstop war are all around us in the United States, from deadly federal budget priorities to traumatic effects of normalized violence. And it’s difficult to grasp the magnitude of harm to so many millions of human beings in other countries. Sometimes, while trying to clear away the fog of the USA’s political and media abstractions, I think of people I met in Baghdad and Kabul and Tehran, their lives no less precious than yours or mine