Even in Death, Soleimani Is the Winner

The assassination only fortifies the Iranian strategist’s legacy as a counterweight to U.S. power. ‘He is as much a product as a producer’ of the decades-long conflict. 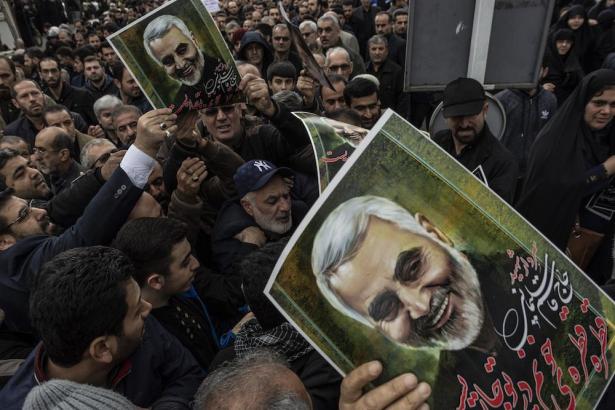 Qassem Soleimani is mourned on the streets of Rasht, Iran, on Friday., Babak Jeddi/SOPA Images/Sipa USA via AP Images

The killing of Major General Qassem Soleimani was an act of war, but the war had begun long ago. Iran, considering its position battling a military superpower, has already won.

Soleimani, assassinated in a Trump-ordered drone strike early Friday morning, was the primary operator who had made Iran so effective in countering American influence in the Middle East. A shadow commander in broad daylight, he was both a member of Iran’s official chain of command and liaison to interlocking layers of clients, allies, and strategic partners across the region. Hamas in Palestine, Hezbollah in Lebanon, the Houthis in Yemen, and various militias in Syria and Iraq: They are more autonomous than proxies, but they all reported to Soleimani, the leader of Iran’s Islamic Revolutionary Guard Corps. And in each of those theaters of war, his counterinsurgency strategies tested the U.S. with the stubborn strength of unconventional combat.

Trump’s tweet is a clever one-liner, but entirely wrong as history. Iran held no sway in Iraq before the hasty U.S. invasion of 2003, but Iran has now emerged as the country’s dominant foreign power. “Iraq has been a kind of frontier of Iran and the U.S. for the last 16 years,” says Omar Dewachi, a historian of Iraq at Rutgers. “Both these empires, both Iran and the U.S., have been playing their own geopolitical game.” Now, Iran is ascendant.

In Syria, Soleimani was engineer of Iran’s policy of backing Bashar Al-Assad, the bumbling Syrian optometrist-cum-president. Since Assad’s father stood by the Iranians during the Iran-Iraq war of the ’80s, Iran reciprocated with a commitment to the monstrous son. When the inept Syrian regime was caught unawares in the early days of the 2011 Arab Spring uprising, Soleimani provided them tools to lethally suppress the revolutionary movement. And so he is also a prime architect of the Syrian civil war, the Syrian tragedy. The image of Palestinian refugees fleeing war-torn refugee camps in Damascus is Assad’s—and Soleimani’s—everlasting shame, yet testament to the Iranian operator’s power.

Even while recovering from the Iran-Iraq war of the ’80s and in the face of escalating international sanctions against the Iranian government in the decades since, Iran has become an increasingly dominant regional power, shaping a half-century of Middle East politics. What’s more, the Iranians have done it while being in a constant state of war with the U.S. and Israel. Strained by 40 years of sanctions and a U.S. policy of stealthy regime change, Iran is still steadfast.

That Soleimani worked with shadow groups yet had been spotted and hunted down in Iraq—does it represent his own hubris or a level of carelessness? Per the unwritten rules, he may not even have thought of himself as a target, but with the latest gambit of Trump and his hacks, all predictions have been thrown off.

Dewachi explained just how powerful Soleimani was in his home country of Iraq. “You could criticize the prime minister or the president, but if you criticized Soleimani ten years ago you would be assassinated by someone.” Few other figures had such panic-inducing authority in the country, approaching the level of Saddam Hussein.

The horrendous conditions in which Soleimani fought during his country’s war with Iraq in the ’80s shaped him as a soldier. Saddam deployed chemical weapons against Soleimani’s poorly trained peers. Soleimani likely learned that cultivating, and sometimes training, clients and associates across the arenas in which Iran sought influence was the only way to win the next war, Laleh Khalili, an anthropologist at the University of London, explained. Strategic connections were forged to address the asymmetrical position of Iranian forces, while also building out the country’s conventional arsenal. Soleimani “is as much a product as a producer of these crises and set of relations,” Khalili told me.

Still, Soleimani’s assassination is in many ways more symbolic than strategic. Though beloved for going onto battlefields without body armor, even without bodyguards, to meet foot soldiers, he was not irreplaceable, according to Narges Bajoghli, a scholar of the IRGC. She writes in the Times that the assassinations of Hamas and Hezbollah leaders, for example, have not hastened those groups’ decline. And a new IRGC commander will implement the callous counterinsurgency strategies that he had advanced across the Middle East.

Trump is already tumbling into unintended consequences. “Iran had a very long game after the Iran-Iraq War developing these relations,” said Khalili, the scholar of international politics, “and their reaction to this will be quite a long-term reaction.” On the domestic level, Iran may continue to crack down on dissent; authorities have killed some 500 to 1,000 demonstrators since the summer. “This [protest movement] has united a lot of people across the spectrum in Iran,” Khalili told me, “but will the unity hold?”

The assassination may also subvert peaceful protests in Iraq. In Baghdad’s Tahrir Square, demonstrations against Iran and the U.S. have not received the concerted media coverage of last week’s assassination. Soleimani was especially loathed among the protesters, as militiamen loyal to the late commander are responsible for the killing of over 500 protesters in Iraq this fall alone. The peaceful demonstrators have sought to transcend sectarian divisions, but the killing of the Iranian major general may further agitate Sunni-Shia divisions in the county.

In response to Soleimani’s assassination, Iran is unlikely to instigate a third world war, and probably wouldn’t seek anything so drastic as to invite a U.S. invasion of the country. Even so, American interests in the Levant and Persian Gulf have been thoroughly undermined by Trump’s bravado, and risky escalations will continue. The U.S., as it did over the weekend, will continue to pursue militia members loyal to Soleimani’s cause, not yet bringing the conflict onto Iran’s turf but scrapping the old parameters of the conflict. U.S. forces will be under pressure to leave Iraq in a hurry, further fraying the alliance. Israel sits ready for rocket war with neighboring Hamas and Hezbollah. Saudi Arabia—which tested a rapprochement with Iran in the aftermath of the attack on the Abqaiq oil facility and the tanker rancor of the autumn—now, along with the United Arab Emirates, may be caught in a new round of crossfire. Meanwhile, Assad is firmly ensconced in Damascus. A revival of the Iran nuclear deal is an absolute nonstarter.

What’s clear is that Iran has only been made stronger by U.S. blunders. And Trump, who promises in rallies to bring troops home, brought back the prospect of a ground invasion. A Marine veteran told me over the weekend that he had checked up on his paperwork to make sure he was no longer in active reserve. The last thing he wants to do is serve in an unnecessary war.

Jonathan Guyer is managing editor of The American Prospect.