Four recent studies suggest that higher minimum wage laws might save lives. The newest paper estimated that a $1 increase in the minimum wage led to a 3.4 to 5.9 percent decline in suicides among adults with a high school education or less. 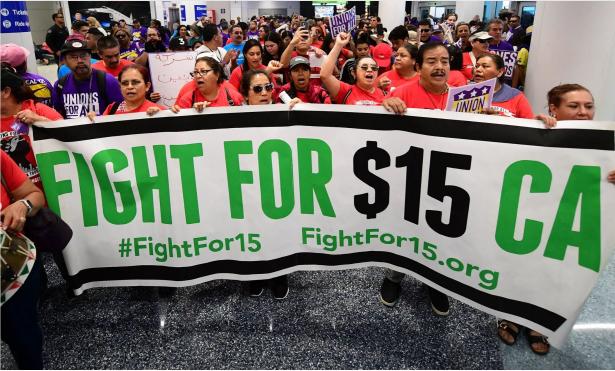 The evidence that minimum wage laws increase wages for employed people is pretty solid at this point. But four recent studies suggest another crucially important effect: They might save lives, too.

The newest of the papers, authored by John Kaufman, Leslie Salas-Hernández, Kelli Komro, and Melvin Livingston in the Journal of Epidemiology and Community Health, examined monthly data across the US from 1990 to 2015 and estimated that a $1 increase in the minimum wage led to a 3.4 to 5.9 percent decline in suicides among adults with a high school education or less. The authors also estimated that over the 26-year period, a $1 increase in each state’s minimum wage could have prevented 27,550 suicide deaths, or about 1,059 per year.

The paper has created a bit of a stir. But it’s just one of four studies in the past couple of years to find an association between higher minimum wages and lower death rates (specifically suicides).

If these findings hold up in subsequent research, they provide a new, persuasive rationale for raising the minimum wage.

The evidence that the minimum wage saves lives, reviewed

Let’s set aside the newest study on the minimum wage and suicide and look at papers from the past year that reached similar conclusions.

A 2019 paper by Alex Gertner, Jason Rotter, and Paul Shafer, which looked at changes in state-level minimum wages from 2006 to 2016, found that a $1 increase in the minimum wage was associated with a 1.9 percent decline in suicide rates. This paper controlled for economic and health factors like unemployment, the per capita state GDP, state spending on Medicaid, and the uninsured rate. But the authors urged that their results “should not necessarily be interpreted as causal,” given the lack of an experimental or quasi-experimental study design.

Another 2019 working paper, by economists William Dow, Anna Godøy, Christopher Lowenstein, and Michael Reich, all from UC Berkeley, attempted to use more rigorous causal identification to measure the effects of both the minimum wage and the earned income tax credit (a cash benefit tied to work and distributed primarily to poor households with kids), on “deaths of despair”: suicides, alcohol poisoning, and drug overdose.

That paper used a “differences in differences” methodology that tracked how such death rates changed in states that increased the minimum wage and then compared those with changes in death rates in states where the minimum wage was stagnant. This methodology required a key assumption: that trends in suicide rates in the states being compared would have been identical, absent the change in minimum wage policy. To make sure this holds, the Dow/Godøy/Lowenstein/Reich paper conducted the same analysis on college graduates, very few of whom are paid minimum wage and are likely not affected by the policy.

Finally, another recent paper found that the minimum wage saves a significant number of lives in another context: nursing homes. Krista Ruffini, a doctoral student at the Goldman School of Public Policy at Berkeley, pulled together 25 years of administrative records for patients in long-term residential care and tried to isolate how their health changed in response to their caregivers getting a minimum wage increase.

Ruffini’s has the strongest causal identification, in my view, of any of these papers (though it’s worth noting that hers is still unpublished): she compared counties where the minimum wage was increased with neighboring counties where it was not, a sophisticated method used in cutting-edge studies of the minimum wage’s impact on jobs. She found that minimum wage increases usually translated to higher pay for nursing home staff — a 10 percent hike in the minimum wage raised their average pay by 1.2 to 1.7 percent.

This, Ruffini documents, has a variety of health effects, including fewer health code violations during inspections, fewer bedsores (technically called “pressure ulcers”), and, most importantly, a large reduction in mortality. Raising the minimum wage by 10 percent would prevent 15,000 to 16,000 deaths in nursing homes every year, Ruffini estimated.

Ruffini admits she’s not entirely sure what’s driving this outcome. It could be that higher wages attract better employees who provide better care; it could be that tighter profit margins force nursing homes to direct care more efficiently, or that it motivates staff to be more productive (a hypothesis known as “efficiency wages”). But she also notes that two recent studies have suggested that increased staffing in nursing homes reduces mortality. It wouldn’t shock me if “more staff” and “better staff” had similar effects on patient outcomes.

The new paper in the Journal of Epidemiology and Community Health estimates a 3.4 to 5.9 percent decline in suicides from a $1 increase in the minimum wage. It uses a methodology somewhat similar to that of the Dow et al. paper, with college-educated adults as a control group, assuming that people without high school diplomas are more affected by minimum wage hikes and that the effects on suicide would be concentrated there. The authors also controlled for other state-level factors like unemployment, GDP, and welfare take-up.

Unlike the Dow et al. paper, the new paper doesn’t use the dollar value of the minimum wage as its independent variable; instead, it uses the difference between the federal and state minimum wages, which functions much the same way. States with higher minimums, naturally, have a greater difference from the federal minimum than states with lower minimums.

But Kaufman, the lead author on the paper, says this reading was based on a misunderstanding, and that the measure was meant as a uniform way to represent the minimum wage in different states. “Their argument really doesn’t make sense. I would rather be responding to criticism from somebody who understood the methods we used,” Kaufman told me in a phone call.

Another concern, raised by UC San Diego economist and veteran minimum wage researcher Jeffrey Clemens, is that the paper finds a statistically insignificant effect of minimum wage hikes on college graduates in the other direction — the suicide rate goes up for this group in states that raise their minimum wage. That’s puzzling, even if insignificant, and it’s not clear why there should be any correlation at all with college grads.

The important thing here, though, isn’t the details of this one study. It’s the point these four studies, approaching the question of minimum wage and mortality from different angles, make together. The debate over the minimum wage, at least in economics, has so far focused monomaniacally on the effects on jobs: Does a higher minimum wage cost jobs for low-income people and do more harm than good?

We’ve made a lot of progress on that question, and it seems clear that modest increases do more good than harm for the workers affected: The wage increases swamp whatever job losses might occur. But this new research suggests that the focus on job effects has prevented us from looking at another important effect of minimum wage laws: the effect on public health.

We need much more research on these topics. But to me, these recent studies all suggest there’s a real possibility that minimum wage laws, and EITC increases, save lives. If that finding holds up in these and other contexts, that’s a powerful new argument for minimum wage increases.

Sign up for the Future Perfect newsletter. Twice a week, you’ll get a roundup of ideas and solutions for tackling our biggest challenges: improving public health, decreasing human and animal suffering, easing catastrophic risks, and — to put it simply — getting better at doing good.

Dylan Matthews joined Vox as one of its first three employees in February 2014, and has been here ever since, writing about everything from furries to foreign aid. Right now he's particularly interested in global development, anti-poverty efforts in the US and abroad, factory farming and animal welfare, and conflicts about the right way to do philanthropy.