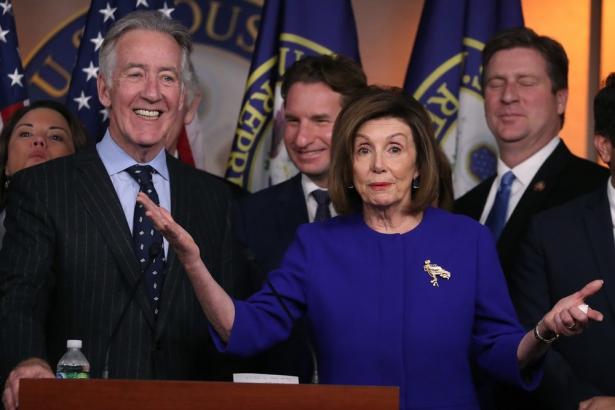 If this week is the “Super Bowl” of trade policy—as Republican Senator Rob Portman called it Wednesday—the planet won’t be getting a ring. The United States-Mexico-Canada Agreement, the Nafta replacement that passed 89-10 through the Senate on Thursday, never mentions the climate crisis. It will do plenty to fuel it.

“Trump’s Nafta 2.0 is a climate failure any way you slice it,” the Sierra Club’s Ben Beachy told me. Beyond continuing to allow companies to seek lax climate and environmental rules outside the United States, the USMCA also lets them challenge new regulations proposed by countries signed onto it before they’re finalized, establishing hurdles to any future climate policy under a new administration.

The deal also goes out of the way to protect fossil fuel companies. All of the tar sands oil that flows to the U.S. from Canada via the Keystone XL pipeline will be exempt from tariffs under the USMCA. While the deal has been praised for largely eliminating Nafta’s Investor-State Dispute Settlement provisions—which made it easy for corporations to challenge governments over laws they don’t like—there are some troubling exceptions to that policy under the USMCA: Oil and gas companies that have contracts with the Mexican government, for example, will still be allowed to challenge any potential threats to their profits posed by state policy. “It’s like saying we’re going to protect the henhouse by keeping all animals away except for foxes,” Beachy said, adding that “today’s vote moves us one step closer to locking in Trump’s polluting legacy for decades to come.” Climate and environmental groups broadly opposed the deal, including some—like the Natural Resources Defense Council—that enthusiastically backed Nafta 1.0 in the 1990s.

While 83 percent of Democratic voters believe trade agreements should address climate change, the party’s congressional delegation largely rallied behind a deal that will make it worse. Democratic House Speaker Nancy Pelosi pushed hard to get the USCMA through the House, where it passed by a wide margin. With varying levels of enthusiasm, liberal stalwarts like Senator Sherrod Brown backed it, citing support from the AFL-CIO, along with most of the GOP and the American Petroleum Institute. “For the natural gas and oil industry, USMCA means more jobs, stronger energy security and continued economic growth,” the API’s President and CEO Mark Sommers boasted. On the other side, trade unions like the Machinists, the United Food and Commercial Workers, and the National Family Farm Coalition joined climate groups in opposing the agreement. It’s been reliably opposed, as well, by indigenous peoples up and down North America for its violations of land rights and the principle of Free Prior and Informed Consent for policies affecting them. Minutes before Thursday’s vote, Democratic Senator Chuck Schumer joined Senators Bernie Sanders, Ed Markey, Kristin Gillibrand, and Kamala Harris in declaring that he was voting against the USMCA “because it does not address climate change, the greatest threat facing our planet.”

Sanders and liberal billionaire Tom Steyer each spoke out against the USMCA as candidates in Tuesday’s Democratic primary debate, where the former was scolded by a CNN moderator for linking climate and trade. While noting that the deal wasn’t perfect, Joe Biden, Pete Buttigieg, and Elizabeth Warren—who ended up voting for it—all voiced their support. “Imagine in the year 2020 we have a major trade agreement that does not even mention the words climate change,” Sanders reiterated from the Senate floor yesterday. “Trade is a good thing, done well. But this trade agreement does not accomplish that end.”

So what could a good trade deal in a warming world look like?

Better accounting could help. As a major fossil fuel exporter and prolific consumer of carbon-intensive imports, the U.S. is responsible for a tremendous amount of emissions that aren’t counted in standard national-level greenhouse gas totals, which generally measure emissions produced within a country’s borders. The first phase of an agreement between the U.S. and China signed this week, for instance, commits the latter to buying $52.4 billion worth of American energy—much of it in the form of oil and gas. Despite the enormous carbon footprint of U.S. businesses at home and abroad, debates on trade and climate in the U.S. have historically happened in separate sandboxes. “Domestic policy, trade policy, and climate policy all happen in their own silos, and there isn’t a lot of systematic attention being paid to how to bring those conversations together,” Todd Tucker, a political scientist and fellow at the Roosevelt Institute, told me.

Over the last 30 years, trade agreements have gotten stronger as climate deals have grown weaker. At the urging of both Republican and Democratic administrations in the U.S., the Paris Agreement swapped out the binding framework from the Kyoto Protocol for a so-called “bottom-up” system, wherein countries make voluntary commitments (“Nationally Determined Contributions”) that may eventually limit the world’s warming to “well below” two degrees Celsius (3.6 degrees Fahrenheit), instead of three or four degrees. There’s a requirement that countries present new NDCs every so often, but many can simply resubmit their original commitments rather than ratcheting up ambition during each new pledge period. Trade agreements, by contrast, generally have stringent enforcement mechanisms and create paths for corporations to challenge sovereign governments over everything from “buy local” provisions to anti-dumping laws.

While the fight for a binding United Nations climate treaty has largely been lost, many environmental activists see trade deals and potentially even bodies like the World Trade Organization as one avenue where enforcement might still be possible. Beyond encouraging more narrow measures like border carbon adjustments—fees to make the price of imports and exports reflect their carbon costs—new rules could further mandate that parties to them strengthen and live up to their commitments under the Paris Agreement or face sanctions and lose access to valuable markets.

Trade agreements have the potential to be a key mechanism by which China—now the top total emitter of greenhouse gases—is brought to the climate crisis fight, as well. The trade war President Trump initiated with Beijing hasn’t helped with that. But hawkish rhetoric from Democrats—framing decarbonization as a race against China over who can build the most clean energy—isn’t helping much either. Jonas Nahm, a political scientist at the School of Advanced International Studies at Johns Hopkins, argues for much deeper collaboration between the two countries rather than reinventing the wheel of green manufacturing. “China controls so much of the manufacturing capacity for so many of the technologies we need to combat climate change that—in the time frame that we have to make a difference—the world cannot replicate this ecosystem elsewhere. It took China 30 years to build the capacity to do this, and so now it’s making 60 percent of the world’s solar panels, nearly 70 percent of the batteries, and a third of the wind turbines,” he said. “We don’t have any of the basic ingredients that you would need to do the same thing China is doing. To try replicate that elsewhere will just delay us infinitely.”

While American progressives talk enthusiastically about ramping up green manufacturing, Nahm said that vision is “very divorced from reality right now, in terms of what we actually make.” The U.S. has little of the technical expertise, trained workers, or institutional support in place to mirror China’s booming clean manufacturing sector (itself spurred by demand from Germany’s shift to renewables) anytime soon. But by exercising massive purchasing power in the world’s renewables market, the U.S. under a Democratic administration could demand far higher labor and environmental standards across its supply chains. “If there’s a demand for products that are certified in a certain way, I’m sure manufacturers would jump on,” Nahm added.

As climate advocates look to map out a climate-friendly trade regime, they’ll have to figure out how to keep existing trade policy from undermining emissions reductions at home. Oil and gas companies have been among the most active users of the Investor-State Dispute Settlement system; according to data compiled by the U.N. Conference on Trade and Development, roughly 40 percent of international arbitration cases initiated by investors against states related to environmental and energy issues. And virtually any kind of green industrial policy could be subject to ISDS-style fights—including “almost any plank of the Green New Deal,” Todd Tucker said. Beyond climate and environmental regulations and bans on fracking, “‘Buy Local’ policies in state, local, or federal initiatives, procurement policies, subsidy schemes contingent on local production … all of that stuff would be very fair game for investment treaty complaints. Almost anything that impacts methods of production in any way would be fair game for a challenge.” All trade deals, it turns out, are climate deals.