An Impeachment Trial Without Witnesses Would Be Unconstitutional

Donald Trump became only the third U.S. president to be impeached. If Mitch McConnell succeeds in his intention to prevent any witnesses from testifying, Trump will become the first president to be acquitted by an unconstitutional impeachment process 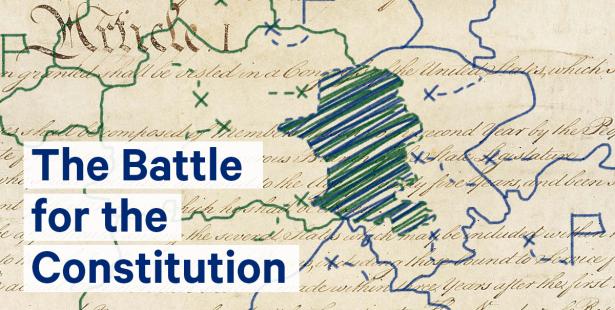 The Atlantic - A special project on the constitutional debates in American life, in partnership with the National Constitution Center,

On the opening day of the impeachment trial, the Senate, in a party-line vote of 53–47, approved an organizing resolution establishing the ground rules for the trial and rejecting efforts by Democrats to compel the testimony of witnesses and the production of documents not included by the House in its impeachment inquiry. However, the resolution allows Democrats to renew their motions to subpoena witnesses and documents after House managers and the president’s defense lawyers have completed their opening statements. The fateful battle over witnesses will thus begin in earnest next week.

In December, Donald Trump became only the third U.S. president to be impeached. If Senate Majority Leader Mitch McConnell succeeds in his intention to prevent any witnesses from testifying, Trump will become the first president to be acquitted by an unconstitutional impeachment process.

McConnell has created the mistaken impression that the Constitution does not provide any guidance about the impeachment process, and that the procedures for the trial—including motions to call witnesses—can be determined by a majority vote. Although the Senate has broad discretion to set the rules for the trial, Supreme Court Justice Byron White, in a concurring opinion in Nixon v. United States (1993), a case involving the impeachment of federal Judge Walter Nixon, found in the impeachment-trial clause of Article I, Section 3 of the Constitution a limitation on the method by which the Senate can conduct an impeachment proceeding. The text of the clause states, “The Senate shall have the sole Power to try all Impeachments.” Justice White interpreted the word try to mean that the impeachment proceeding must be in the nature of a judicial trial, and concluded that “a procedure that could not be deemed a trial by reasonable judges” would be unconstitutional.

White found support for his conclusion in the Framers’ understanding of the impeachment process, particularly the arguments by Alexander Hamilton, the delegate to the Constitutional Constitution who devoted the most attention to the impeachment function of the Senate. Contrary to McConnell’s assertion that impeachment is actually a “political process” and that “there’s not anything judicial about it,” Hamilton described the Senate in “Federalist No. 65” as possessing a “judicial character as a court for the trial of impeachments,” and in “Federalist No. 66,” he repeatedly referred to the Senate as “a court of impeachments.”

There is a widespread assumption among Americans that it is perfectly legitimate for the trial to be conducted as a no-holds-barred partisan battle, with senators voting along party lines, rather than impartially deciding the merits of the case. This is contrary to the Framers’ intent. Hamilton regarded the upper chamber as “the most fit depositary” for the impeachment trial because it provided “the necessary impartiality between an individual accused, and the representatives of the People, his accusers.”

The choice of the Senate made sense for the Framers, who contemplated a republic without strong parties and a Senate whose members —elected by state legislatures until the Seventeenth Amendment was ratified in 1913—were expected to function in a less partisan, more deliberative, and wiser manner than their popularly elected counterparts in the House. The impeachment oath, which requires senators to “do impartial justice,” is not a quaint ritual to be performed with a wink and a nod, but a procedure required by the Constitution because the Framers intended the impeachment proceeding to be run much like a judicial trial.

Senators are thus constitutionally bound to follow what Justice White described as “a set of minimal procedures.” His opinion does not specify their exact contours, except to say that they must be the kinds of procedures a reasonable judge would regard as necessary components of a court trial. Because no reasonable judge would refuse to allow witnesses with personal knowledge of the facts to testify in an ordinary trial, it is the Constitution itself that establishes the right of House managers to call witnesses such as former National Security Adviser John Bolton and Acting White House Chief of Staff Mick Mulvaney. Both men are thought to have firsthand knowledge of the president’s purpose in holding up congressionally approved military assistance to Ukraine after a phone call in which Trump asked the country’s newly elected president, Volodymyr Zelensky, to investigate Joe Biden and his son Hunter.

At least three moderate Republican senators—Mitt Romney of Utah, Lisa Murkowski of Alaska, and Susan Collins of Maine—have indicated their openness to hearing testimony from Bolton and other key witnesses, which leaves the 47 members of the Democratic caucus one vote short of the majority needed to compel testimony from the four current and former administration officials on their witness list. In addition to Bolton and Mulvaney, House managers want to call Robert Blair, a senior adviser to Mulvaney, and Michael Duffey, a top official in the White House Office of Management and Budget who, at the direction of the president, ordered the hold on the military assistance 90 minutes after the phone call. The nonpartisan U.S. Government Accountability Office has ruled that even if the president withheld the aid for national-policy reasons, rather than for personal political gain, his action violated the Impoundment Control Act because the president cannot substitute his own policy priorities for those of Congress.

New documents provided on January 14 to the House Intelligence Committee by Lev Parnas, an indicted former associate of Trump’s personal lawyer Rudy Giuliani, will increase pressure on Republican senators to allow additional testimony and evidence, including testimony from Parnas himself, because they demonstrate how much remains unknown. “There is news every day and that will likely be factored in,” Senator Murkowski said when asked about the documents, which include a letter signed by Giuliani stating that his communications with Zelensky were made with Trump’s “knowledge and consent.” Parnas also gave a rather sensational interview to MSNBC’s Rachel Maddow, in which he linked Trump to Giuliani’s efforts to pressure Zelensky to announce an investigation of the Bidens, saying the president “knew exactly what was going on.”

Even if McConnell, in the face of this new evidence, can prevent the defection of more than three Republican senators, a majority vote of the Senate cannot validate the unconstitutional exclusion of witnesses from an impeachment trial. If Republicans succeed in preventing House managers from calling witnesses with firsthand knowledge of relevant facts, an acquittal of the president will be unconstitutional. Given that a majority of the Supreme Court in Nixon ruled that a Senate impeachment trial is not subject to judicial review, the question remains, if the courts cannot overturn a Senate verdict, what are the legal consequences of an unconstitutional acquittal?

Related: Susan Hennessey and Benjamin Wittes: The disintegration of the American presidency

An answer is provided by a momentous opinion of the Justice Department’s Office of Legal Counsel, which is responsible for providing the president with “controlling advice” on questions of law. The relevant OLC opinion is the same one that furnished the basis for Special Counsel Robert Mueller’s conclusion that he was prohibited from prosecuting Trump before he left office, even if there was overwhelming evidence that the president had committed serious crimes.

The OLC opinion, written in 2000 by then–Assistant Attorney General Randolph Moss, explains that the reason prohibiting the prosecution of a criminally culpable president does not violate the “important national interest in ensuring that no person—including the President—is above the law” is because “the constitutionally specified impeachment process ensures that the immunity would not place the president ‘above the law.’”

If the impeachment process conducted by the Senate is unconstitutional, the unavailability of either criminal prosecution or a legitimate impeachment trial as a means of presidential accountability, according to the OLC opinion’s own reasoning, would “subvert the important interest in maintaining ‘the rule of law.’”

An unconstitutional verdict of acquittal would present Americans with something far worse than a constitutional crisis. The nation will have blundered its way into creating an accidental autocracy governed by a president who, even if not reelected, would remain in office until January 20, 2021, beyond the reach of the rule of law.

“Wherever law ends, tyranny begins,” John Locke cautioned in his Two Treatises of Government. This is how autocracy comes to America: not with a declaration of martial law and tanks in the street, but by a roll-call vote in the Senate whipped by the leader of the Senate in violation of the Constitution.

If on the day the Senate returns its verdict, history records the failure to convict the president following a trial without witnesses, that will be the day the rule of law dies in America. The courts will remain open for business. Congress will be in session. Citizens will still be able to vote. And a free press will continue to launch withering attacks on President Trump. But the American people will no longer be living in a constitutional democracy.

This story is part of the project “The Battle for the Constitution,” in partnership with the National Constitution Center.

[PAUL SAVOY is an attorney and a former prosecutor in the office of the Manhattan District Attorney.]