“If you want peace you must prepare for war," - despite its history, support for a growing and aggressive military finds many such rationalizations in today's Germany. Meanwhile, the peace movement continues to demand base closures. 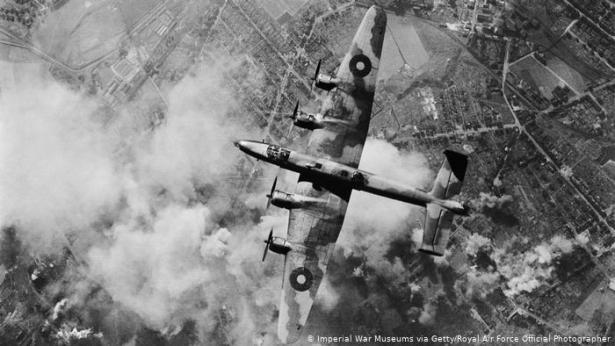 ALARM! Twelve thousand residents must immediately leave their homes! All hospital clinics must be evacuated! No exceptions! Hasten! “

Not in burning Australia nor a besieged town in Syria or Afghanistan, but on January 12th 2020 in the otherwise peaceful if no longer prosperous Dortmund, in Germany’s Ruhr Valley; once again, unexploded bombs were detected under a central street and needed delicate defusing. Peaceful life had again been disrupted by remnants of World War Two; Dortmund, on March 12th 1945, was hit by the heaviest air raid of the war, costing 6341 lives and most of its remaining buildings. Last week’s detonations went safely - but restated a sad fact: in dozens of cities people still fear leftovers of a war which ended 75 years ago.

One month after the air raid in 1945 American GI’s freed Dortmund, just one day too late to save a last group of over 300 German antifascists and slave laborers from France, Belgium, Netherlands, Yugoslavia, Poland, the USSR, whose bullet-ridden corpses their Nazi killers had dumped into a mass grave. Three weeks later GI’s and Red Army men met and shook hands on a bridge over the Elbe River. Ten more days and the Soviets overcame desperate resistance to finally free Berlin, ending a 12-year nightmare which cost an estimated 27 million lives alone in the USSR - including huge numbers of civilians in burned villages, starved, frozen, in countless mass graves like the one in Dortmund. Europe turned to healing its wounds, to repairing colossal destruction. It, and the whole world, yearned for lasting peace.

Now, 75 years later, we watch the incredible turn-around. The happy handshakes and yearnings of that momentous springtime seem fully forgotten, erased. Troop movements today promise anything but peace. Every two years military maneuvers encircle Russian borders; every nine months a new brigade of 4500 US soldiers was flown over to “gain experience”. This year it will be a division of 20,000, joined by soldiers from 18 countries, 37,000 in all.

The "Defender 2020" maneuvers will include mock attacks by Polish soldiers playing “the enemy” in tanks from one-time Soviet production. But at a press conference US Maj. Gen. Andrew Rohling, backed up by a German lieutenant general, insisted that the maneuvers are “not directed against Russia” but “simply to demonstrate a military ability to react quickly if it ever become necessary.”

“In an ideal world soldiers and armies are superfluous. But our world is not ideal… The old principle is still valid: ‘If you want peace you must prepare for war.’ … Maneuvers like ‘Defender 2020’ are part of this. Firstly, to keep in practice. To test how quickly the US Army can move its forces over long distances. Whether German roads and bridges hold out under deep-loaders carrying tanks. Whether communication works out between soldiers of different countries.... But secondly, this exercise is a signal: ‘In any and every case we are ready.’ The recipient is easily discerned: Russia. Appeasement is worthless. It is seen by the Kremlin as weakness. That is why the so-called NATO spearhead was built up in the Baltic countries.”

Not a few spearheads are being brandished these days. Some were weapons shipments to the Ukraine, where a heavily-financed, well-planned ‘regime change’ in 2014 featured violent mobs boldly exchanging Hitler salutes, wearing Nazi symbols and complementing the Baltic spearhead near St. Petersburg with one closer to Moscow, while trying to sever Russia’s outlet to the Black Sea. One need not be a “Putin-lover” to look at a map and grasp the Crimea story!

In the Near East a preferred form of spearhead was the drone. It proved effective against military leaders who, despite their key successes in fighting ISIS, were not to the liking of experts like Pompeo or Trump. Drones, aimed from comfortable chairs off in the Rocky Mountains, also proved effective against “terrorist” groups, which sometimes turned out to be wedding parties or peasants and children gathering pine-nuts. In the first half of 2019 alone 150 Afghani children were killed.

Because of the earth’s curve, aiming drones in Afghanistan, Iraq, Somalia or Yemen requires a relay station in Europe. This is at the base of Ramstein, HQ of the US Air Forces for both Europe and Africa and the biggest American base outside US boundaries. It is balanced further north in Germany by the base in Bückel, where ten to twenty B-61 bombs are stored, each of them four to 13 times more powerful than the bomb dropped on Hiroshima. Next door are hangars for German Tornado fighter-bombers to carry them eastward. Occasional promises, even votes, to oust the bombs – illegal on German soil – have thus far been ignored or weakly rationalized. It is not only TV commentators who like strong spearheads.

For years the German peace movement has fought to shut down those bases. This year their efforts will tie in with protests against “Defender 2020” and all its attempts to whip up sympathy, with flag-waving to mark eternal German-American friendship and army bands flown over to play the Star-Spangled Banner, Deutschland über alles and the best of John Philip Sousa’s marching music. What will they play on May 8th to mark the defeat of the Nazis 75 years ago? Since Russia is no longer invited even to events marking the liberation of Auschwitz and Treblinka (by Red Army soldiers), its anthem will hardly be intoned. The date may well be overlooked anyway, for uncomfortable recollections in this direction also run the risk of being viewed as “Putin-friendly”.

But in Berlin the leftish coalition (Social Democrats/Greens/LINKE-Left) surprisingly designated that date as a holiday, at least in this one city for this one year. Germany has mixed currents, even some which, despite all epithets, prefer selling cars and vegetables to Russia, or building underwater gas pipelines, to waving spearheads.

Mixed currents flow through many political parties. Peaceful ones are hardest to find in the words of Annegret Kramp-Karrenbauer (“AKK”), who replaces a more moderate-sounding Angela Merkel as Christian Democratic chair (and hopes to succeed her as chancellor). Frau AKK seems to favor keeping German troops in Kosovo, Afghanistan, Mali, Niger and Iraq, if not more. She is for toughness; the armed forces, now costing € 43 billion a year, should choke down billions more in future, with the fastest planes and deadliest drones. Germany must “have the courage… when necessary, together with our allies and partners, to resort to the full spectrum of military measures.”

The Social Democrats, still partners in the government coalition despite all the losses it has cost them, are hunting desperately for popular policies. The members, sharply reduced in number and polling at only 14%, chose two new leaders reputed to tilt somewhat leftwards, but the cabinet members, most notably Foreign Minister Heiko Maas, while occasionally mumbling disapproval of confrontation and assassinating opponents, back off fearfully from a possible total collapse if they break with their Christian partners, their Washington patrons, or their hushed ties to men and women of money, power and influence.

The once left-leaning, so very non-conformist Greens, while still pushing environmental issues loudly enough to soar into second place in the polls, often seem to overlook working-people’s rights and to sing the loudest in the spearhead-waving chorus. In one state after another they show willingness to join up with the “Christians.”

The quasi-fascists AfD, in a tie with the Social Democrats at 14% in the polls, sometimes praises a vote-getting peaceful policy but always insists on more and more armaments and men in uniform. In the last century Germans experienced – and still experience in cities like Dortmund – what such twists and turns lead to.

And the LINKE? On January 11th the annual Rosa Luxemburg conference, again organized by the daily ‘Junge Welt’, brought together 3000 leftists from all over Germany plus foreign guest speakers from Bolivia, Turkey, Colombia, Israel-Palestine, also Tory Russell from Ferguson who described Black Lives Matter. This year again a moving message was recorded by Mumia Abu Jamal in his Pennsylvania jail cell.

The next day, like every year, the “old faithful” and younger enthusiasts laid red carnations at the memorial site for the martyred Rosa Luxemburg and Karl Liebknecht and many other 20th century socialists and communists. In the afternoon, LINKE Bundestag delegates offered a program with good music, fiery speeches and a first chance for many to see and hear the new co-chair of the LINKE caucus, Amira Mohamed Ali, who replaces the retiring Sahra Wagenknecht. Most party members and supporters are waiting in great suspense for a big conference on February 29th, hoping to break out of their current slough with a fighting new program and militant struggles, like the five year rent price ceiling planned for Berlin, a daring attempt, per referendum, to confiscate thousands of apartments owned by giant real estate sharks – and support for the peace movement in its opposition to “Defender 2020” and all atomic spearheads now menacing everyone – whether in Dortmund or Donbass. Damascus or Denver!

Victor Grossman, born in NYC, fled McCarthy-era menaces as a young draftee, landed in East Germany where he observed the rise and fall of its German Democratic Republic (GDR). He has written an autobiography Crossing the River: A Memoir of the American Left, the Cold War, and Life in East Germany (University of Massachusetts Press, 2003), and analyzed the GDR and questions of capitalism and socialism in Germany and the USA, with his provocative conclusions in A Socialist Defector: From Harvard to Karl-Marx-Allee (New York: Monthly Review Press).