Where We Stand With Coronavirus

Scientists have grown the coronavirus in the lab for the first time. This is good news, and will advance the search for a vaccine. Meanwhile, what should you do to stay safe? 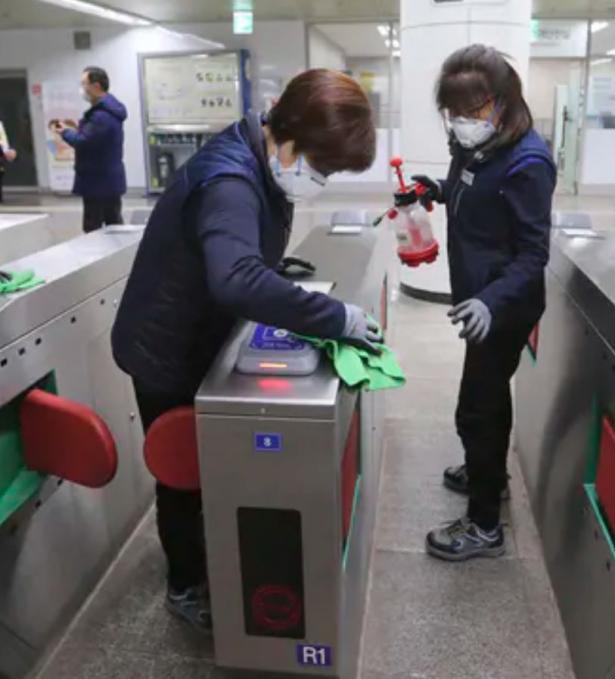 Employees disinfect ticket gates to prevent the spread of the coronavirus at a subway station in Seoul, South Korea, Jan. 28, 2020, AP Photo/Ahn Young-joon

Scientists at the Peter Doherty Institute for Infection and Immunity in Melbourne, Australia, announced Jan. 29 that they were able to grow the Wuhan coronavirus from a patient sample in the laboratory. This was the first time the virus had been grown in a lab outside China.

This is good news, since it will allow researchers to quickly develop new diagnostic tests for the virus, which will be essential if scientists want to be able to track its spread across China and the rest of the globe. There is so much we scientists still do not understand about this fast-moving pathogen.

A lab in Melbourne, Australia, grows coronavirus in a lab, which could help expedite the development of a vaccine.

I am a veterinary researcher, and I study how respiratory viruses such as influenza cause lung disease in animals and humans. I see this development as an encouraging sign.

A market with a global reach

The virus appears to have originated at an animal and seafood market in the central Chinese city of Wuhan in Hubei Province toward the end of 2019.

It is important to note that here have been no deaths yet outside of mainland China, and the majority of most cases seem to be confined to the area around Hubei. This may be thanks to the prompt, if perhaps slightly draconian, quarantine measures instituted by the Chinese government. At the same time, some critics are saying that Chinese officials did not act quickly enough, allowing 5 million people to leave the city before it announced the seriousness of the virus.

Still, all of us, scientists and non-scientists, should try to maintain some perspective here. The city of Wuhan alone has a population of more than 11 million. In that light, perhaps the roughly 7,000 confirmed cases is not really so many after all? The problem is that right now, the public, scientists and health officials don’t know if those 7,000 cases could be just the beginning of a major outbreak.

It is possible that some, or even many, of those who contract the virus only experience mild disease and are therefore not tested for infection. Moreover, this coronavirus appears to be less deadly than the SARS coronavirus of the early 2000s. That said, the 7,000-plus cases of the new coronavirus in China already exceeds the 5,327 cases of SARS.

At the moment, confirming infection requires time-consuming polymerase chain reaction-based tests for viral genes that can only be performed in a few laboratories. The technique behind this test allows researchers in the lab to make millions of copies of a particular section of DNA, but it’s not quick. The technology developed in Australia will help develop new and more rapid antibody-based diagnostic tests for infection that can be used in the clinic, not the lab. This will allow doctors to identify infected patients much faster and deploy appropriate infection control measures as needed.

This would allow scientists to get a far clearer picture of how readily this virus is transmitted from person to person, how many of those infected get very sick, and if there are any groups that are particularly prone to severe and potentially lethal disease. This information is essential if we wish to respond to the outbreak rationally.

The ability to grow the Wuhan coronavirus in the laboratory will also make it easier to develop a vaccine. Developing and manufacturing a vaccine requires large amounts of viral proteins that can serve as vaccine antigens that will induce an immune response in people. This can realistically only be done by growing large amounts of the virus in cells in a laboratory or vaccine manufacturing facility. Vaccines against several coronaviruses already exist, including SARS and MERS and such vaccines tend to elicit good immunity. Again, that is good news.

But vaccine development, manufacture and testing takes time. Theoretically, the first doses of a new vaccine might be available by late spring, although that would be a best-case scenario. But even then, making enough vaccine doses could take a year. Hence, it is unrealistic to think that vaccination will allow us to control disease in the short term.

Read more: When will there be a coronavirus vaccine? 5 questions answered

So what can one do to stay safe? First, don’t panic. There is as yet no reason to believe that the Wuhan coronavirus will have a devastating impact upon humanity. Second, wash your hands frequently because doing so removes virus from your hands. Because people touch their hands with their faces, virus that remains on hands can then enter the body through the mouth or nose. Also, a person with virus on their hands can spread it to other people through touching someone and by spreading it onto surfaces such as door knobs. Third, if you get sick, stay home and avoid spreading whatever virus you have to others. And finally, get your flu shot – right now. Influenza is a far bigger threat to the health of the average American than this faraway virus.

[ Expertise in your inbox. Sign up for The Conversation’s newsletter and get a digest of academic takes on today’s news, every day. ]