We’re All In This Together: Palestine & Advocacy Film

In the larger oneness of humanity, there is no isolation. If others are suffering, don’t we have a responsibility as non-sufferers? Making the film Solidarity: Five Largely Unknown Truths About Israel, Palestine, and the Occupied Territories. 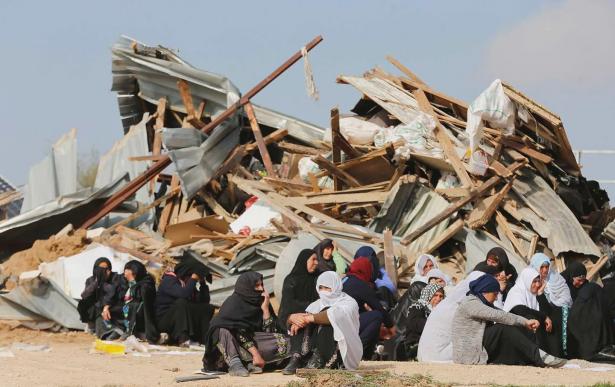 Palestinian women sit next to the ruins of their dwellings, which were demolished by Israeli bulldozers in Umm al-Hiran, a Palestinian village in Israel’s southern Negev Desert, January 18, 2017.,Reuters / Ammar Awad // Medium

When I’m not writing about mystic philosophy and esoteric topics like chakric metaphysics (and consequently feeling the climbing eyebrows of scientific materialists), my other primary creative outlet is making advocacy films.

The mystic’s worldview lines right up with advocating for universal human rights. If we truly believe from our innermost depths that we are all one big global family, or (playing at the edge of mysticism) even Oneness Itself, we start to act accordingly.

We try to reduce their suffering.

This global family concept seems to be more and more crucial entering the 2020s. In the larger oneness of humanity, there is no isolation. If others are suffering, don’t we have a responsibility as non-sufferers? Sadly, there is no shortage. From the detained Uyghurs to the Yemeni refugees to my fellow Texans living under the highway, suffering on this planet is all around us. And that’s only the humans.

I love all of the Bernie slogans but one of my favorites is, “We’re all in this together.” Simple and true. He’s so radical!!

A component of that sense of togetherness for me came to light a few years ago regarding the persecution of the Palestinian people.

In September 2017, at the end of a late night that was starting to get bluer, talking politics and the state of relations between Israel, Palestine, and America, with two Palestinian-American pals (my future co-producers Bilal & Mahmoud Shreidi), I resolved to make a film. Not every resolution in that setting has come to fruition but thankfully this one finally did.

If you’re like me before I knew any Palestinian-Americans personally, you might not know much about that part of the world. After interviewing three Palestinian-American activists and three Jewish-American activists including a professor of Jewish liberation theology, I’ve learned so much. The editing process took eighteen months, because it included absorbing hundreds of articles, dozens of lectures, panels, clips, and other documentaries.

The film is called Solidarity: Five Largely Unknown Truths About Israel, Palestine, and the Occupied Territories.

The crux of the situation is encapsulated by the following quote by the late great Edward W. Said, to whom the film is dedicated:

“Palestinians have been displaced. They have had their society shattered. They have had to live under military occupation. Their lands and lives are today systematically torn apart. There are no two ways about it I believe. Which is not to say that we must simply overlook the tragic history of the Jews, on the contrary, I would always want to say that as a Palestinian I should make my case to defenders of Israel on the basis of, taking full account of, making due acknowledgment of the history of discrimination against Jews. That kind of policy should never ever be visited on anyone for any reason at all, least of all by Jews in the name of their safety and independence.”

The five truths serving as chapters in the film are:

#1 Most scholars agree that the beginning of today’s struggle was the displacement of over 700,000 Palestinian Arabs by the Israeli military in 1948, which the Palestinians call “The Nakba”, meaning “catastrophe” in Arabic.

#2 Since the First Intifada, nearly 7x as many Palestinians have been killed by Israelis than Israelis killed by Palestinians, and this disparity is growing over time. Source: VisualizingPalestine.org

#5 Criticizing or resisting the Israeli government and the Israeli military is not anti-Semitic.

Instead of explaining them in great detail, I’d rather point you to watch the film. There is no screening. There is no premiere. It’s now on YouTube because the sole point of the film is to get it out and educate. I spent and made exactly $0 from its creation, and it’s not monetized. The found footage online is fair use.

To be clear, my intention is not to malign the Jewish people or the Jewish religion (which almost sounds ridiculous that I have to make that disclaimer), but rather to expose the injustices perpetrated by the Israeli government, Israeli military, and American government. There are incredible groups like We Are Not Numbers telling everyday stories of Palestinians on the ground. There are brilliant Palestinian artists and poets who have influenced so many of us outside of Gaza and the West Bank. And there are fearless independent journalists reporting on issues avoided by corporate media networks.

And while Palestinian voices need to be lifted up, I have also been thrilled to see growing Palestinian allyship from Israeli, European, and American Jews (including Senator Sanders) realizing that the occupation is indeed “a moral crisis”. The involvement of organizations like Jewish Voice for Peace and If Not Now? are helping to turn the tide towards a larger understanding, to, as King put it, bend that moral arc of the universe towards justice.

Throughout the creation of this film I would ask other Americans about their familiarity, and even relatively politically-informed friends & colleagues have no idea that this grave of an injustice is going on, let alone the $10M per day of American tax dollars funding Israeli missiles and helicopters. (The few who were aware follow the Amy Goodmans and Glenn Greenwalds and frequently reference Manufacturing Consent.)

And because the American media and government is so heavily pro-Israel, I’m okay with leaning a bit more towards the other direction. The film’s Palestinian perspective is one of the reasons why my colleagues at Jewish Voice for Peace have been such important collaborators — they are sincere Jewish seekers for justice and universal human rights.

Noor’s call-to-action at the end of the film passionately summarizes our film’s purpose:

This film is not an indictment of the Jewish people.
It is a criticism of the Israeli government, the Israeli military, and the American government.
It is a call to action.
To our Jewish allies, join us in the movement to end the decades-long persecution of the Palestinian people.
Join Jewish Voice for Peace.
Join If Not Now.
Research BDS and make your own decision.
Read up.
Speak out.
May we all live in peace.
In’shAllah. Thank you.

We can’t solve all of the world’s problems for every human, every brother and sister on this beautiful planet.

But we can use what individual talents we have, from creative to scientific to spiritual to psychological to logistical, to advocate for one another in our own way, and to try to reduce suffering.

“How to Fight Antisemitism.” by Bernie Sanders, Jewish Currents, 2019.

If Not Now? Political Organizing Guide

The Question of Palestine by Edward W. Said (1992)