American Factory Grapples With the Notion of Freedom

The Netflix documentary charts the economic and social issues that converge when the Chinese company Fuyao moves into a former General Motors plant in Ohio. 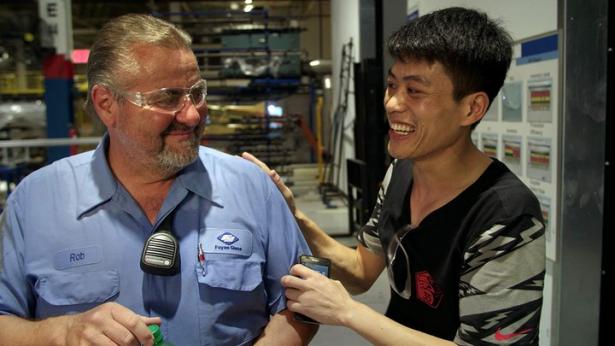 American Factory captures the moments of friendship between workers even as a unionization battle causes tensions with management to run high., Netflix

“America is a place to let your personality run free.” So goes a cultural briefing for incoming Chinese workers at an auto-glass factory in Dayton, Ohio, the subject of Steven Bognar and Julia Reichert’s new Netflix documentary, American Factory. “As long as you’re not doing anything illegal, you’re free to follow your heart. You can even joke about the president. Nobody will do anything to you,” a representative of the Chinese manufacturer Fuyao tells his somewhat disbelieving employees.

In 2014, Fuyao bought part of a closed General Motors assembly plant in Ohio and created thousands of jobs, revitalizing a local industrial sector that had fallen on desperately hard times when GM left town during the 2008 recession. American Factory charts the wave of exultation that greeted the arrival of Fuyao, followed by culture clashes, growing pains, and eventually forms of internal and external pushback that had been largely unknown to the company. The film is a captivating examination of the notion of “freedom” promised in that opening presentation: how limited and illusory it can be, and how widely the concept’s meaning can vary around the world.

When Fuyao comes to Ohio, the company brings with it several hundred Chinese employees who have experience in running a large-scale glass-making operation. They’re there to help train the 2,000 new American hires, many of whom are former GM employees, on the intricacies of industrial glass production. The breadth of footage that Bognar and Reichert capture over the next few years is staggering and includes intense labor on the factory floor, boardroom negotiations, and a unionization battle that ripples through each layer of the company. As the Chinese employees are told, in the United States you can freely mock the president and “follow your heart.” But the conditions the Fuyao workers face are challenging, and the locals’ initial friendliness toward the company curdles into something more complex as the United Automobile Workers begin to organize the factory.

Though American Factory is very much a story about two different workplace cultures figuring out how to interact, its narrative also fits with Reichert’s interest in documenting the struggles of American radicalism and its conflicts with the country’s capitalist infrastructure. The director’s past Oscar-nominated projects include Union Maids, which was an oral history of women’s efforts to organize in the 1930s, and Seeing Red, which traced the development of the American Communist Party. In these films, as in American Factory, Reichert presents her subjects with remote bluntness; this is not a polemic, but rather an attempt to understand every side of an unhappy situation.

The first third of the film focuses mostly on the culture clash, with charming scenes of the American and Chinese workers getting to know one another, and fascinatingly candid footage of Cao Dewang, the chairman of Fuyao, touring the reopened factory. Cao’s avuncular personality belies a serious tendency to micromanage, and Bognar and Reichert’s camera follows him as he walks around pointing out architectural details he wants changed, to the American middle managers’ dismay. This expectation of total control is presented as something Cao has taken for granted in China; Fuyao has clearly never had to deal with worker pushback before.

That vision of control is a bit of a fantasy in the U.S., however. For one thing, the former GM employees are making half what they made at the auto plant; more importantly, the glass-making conditions are often strenuous, and the facilities dangerously hot. The workers’ organizing seems inevitable to everyone but Cao and his team of executives, who immediately authorize a campaign to disrupt it. The unionization effort becomes a narrative spine for American Factory, as Bognar and Reichert look in on management meetings, rallies, and the aggressive anti-union rhetoric employees are subjected to in the weeks leading up to the vote.

Still, this is not explicitly a film about the struggles that unions face when organizing 21st-century workplaces. Throughout the movie, even as tensions run high, the filmmakers continue to show idiosyncratic little moments of friendship between Dayton natives and the Fujianese immigrants toiling alongside them. Just as the directors dig into the hardships created by the new factory’s lower salaries, they also reckon with the loneliness of the Chinese workers who have moved thousands of miles from home and won’t see their families again for years.

American Factory could have been made instead as a piece of Michael Moore–style agitprop about the new forms of global capitalism that working-class Americans have to reckon with. Alternately, some scenes could be adapted into a light comedy about midwestern workers who learn about karaoke from their Chinese counterparts, and then enthusiastically teach them how to fly-fish. But this film reaches beyond those categories. The documentary’s wider sweep benefits the viewer, demonstrating the complexity of the economic and social issues converging at the plant. Fuyao’s presence in Ohio is an undeniable boon, an investment in an area where people felt abandoned by U.S. businesses, but Bognar and Reichert’s film is a reminder that capitalism is always double-edged.
David Sims is a staff writer at The Atlantic, where he covers culture.