In post-industrial Ohio, a Chinese billionaire opens a factory in an abandoned General Motors plant, hiring two thousand Americans. Early days of hope and optimism give way to setbacks as high-tech China clashes with working-class Americans. 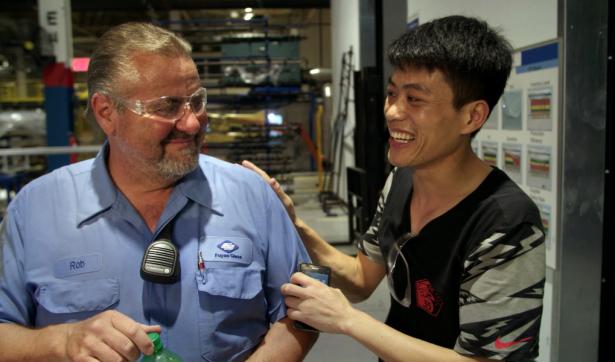 Veteran documentary filmmakers Steven Bognar and Julia Reichert’s Oscar-nominated short “The Last Truck: Closing of a GM Plant” tracked the final days an Ohio factory that left some 3,000 people without jobs. “American Factory” serves as a kind of sequel to that drama, revealing the strange odyssey of the company that moved in. The saga of Fuyao Glass America, a Chinese-run company that overtook the old GM plant and rehired thousands of locals, unfolds as a fascinating tragicomedy about the incompatibility of American and Chinese industries. Arriving in town as its saving grace, Fuyao instead brings a whole new set of bureaucratic problems and enterprising goals often lost in translation.

“American Factory” takes off two years into the factory’s arrival, as over 1,000 people have been employed by the glass-maker and optimism runs high. The company’s hawkish leader, the beady-eyed billionaire Chairman Cao Dewang, arrives at the facility beaming with pride — but it doesn’t take him long to start micromanaging every facet of the plant, leaving his English-speaking senior staff agape. As Cao wanders the grounds with a translator in tow, “American Factory” shifts from an optimistic portrait of a Chinese rescue mission to a dispiriting comedy of errors, like an episode of “The Office” for fans of “The World Is Flat

Chairman Cao and his disciplined staff hail from a separate universe from their American counterparts. At first, managers boast about assigning employees from both countries to work side by side as they endure brutal hours and dangerous conditions, smoothing out car windshields under high heat and risking limbs with heavy machinery. The movie’s sprawling footage sketches out the potential for cross-cultural allegiances, and even pauses to capture workers from both countries bonding over a fishing trip. For a while, Bognar and Reichert linger on details with the rigorous approach to complex institutions found in Frederick Wiseman’s work, where conflict is only part of a much bigger picture.

But it doesn’t take long for the complaints to trickle in: The Chinese complain that the Americans are lazy, talk too much, and generally fall short of the company’s menacing standards. The Americans are baffled by their Eastern peers’ cultish work ethic. In China, an opaque government and socialist business strategies favor the harsh expectations of senior management, but the American factory workers see another path forward, and it’s only a matter of time before talk of joining the United Automobile Workers union gains traction.

Naturally, the chairman’s displeased with this development, dispatching his minions from virtually every angle to break the union talks … or else. The filmmakers somehow manage to capture every angle of this running feud, from alarming boardroom conversations in which Cao threatens to shut down the whole operation to the dozens of workers who see their options from both angles. At its best, this sprawling cinema-verite account plays as a pileup of errors, with Cao’s staffers grousing about their frustrations with the American staff, while union talks continue to accelerate. When Senator Sherrod Brown comes to town for a local event and voices his support, Cao visibly squirms in his seat.

Of course, America has underestimated China for decades, and “American Factory” provides a microcosm of that ongoing tendency; as the drama builds to a union vote, it’s never quite clear who has the upper hand. The veteran filmmakers and their extensive camera crew assemble the situation into a swift and involving account of the mounting consternation on both sides. Trusting the strength of their material, they never rely on extensive title cards to explain the context of any given scene. Aided by Chad Cannon’s playful score, the movie oscillates from an amusing portrait of institutional dysfunction to reveal just how little sympathy Cao has for the concerns of his staff.

Once the union prospects take hold, “American Factory” circles the situation from innumerable angles, and sometimes stalls on redundant observations. But the movie never lacks for insights into the nature of the disconnect. In one hilarious sequence, a Chinese manager attempts to explain American work culture to his staff (“Americans love being flattered to death,” and “You can even joke about the president”). Meanwhile, the Americans remain baffled at the infusion of Chinese culture into their surroundings, including television screens broadcasting propaganda by the snack machines. (“This is America. We don’t need Chinese children singing and praying.”)

Despite these clashes, “American Factory” also illustrates a genuine willingness by the workers to get along. The movie’s standout moment arrives at a company holiday party, where Chinese women and children deliver historic songs about the joys of the workforce before a group of men take the stage to perform “YMCA.” That’s disarming humor of “American Factory” in a nutshell.

Though the origin of this story stretches back a decade, “American Factory” never peers beyond its setting to explore the grander context of American factory life and the threats it faces from rampant globalization. Instead, the filmmakers wisely trust viewers to do the legwork. In 2019, it’s refreshing to see a movie that extends beyond Trumpian rhetoric about the perils of the working class to examine the real tensions of international businesses in human terms. At the same time, it works overtime to see the conundrum both ways, as the filmmakers even spend time with Cao and let him plead his case. Having grown up in a time of economic duress for China, he expresses a passion for leading the charge as his country angles to become the next great superpower.

Yet even he’s not sure if he’s the hero or villain of this story, and the most remarkable aspect of “American Factory” is that it lets the audience sort that one out along with him. While the movie finds a natural end point, the saga of Fuyao Glass America is far from over. The payoff leaves something to be desired, but understandably so, as the very existence of this documentary sets the stage for a new phase of factory life unlikely to smooth out its troubles anytime soon.