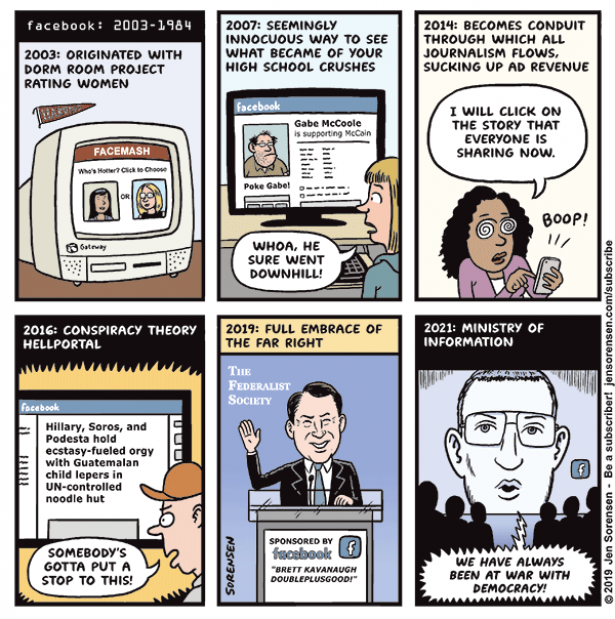 [Portside note: Since this article appeared, Warren stated that in a private conversation in 2018, she told Sanders "I thought a woman could win; he disagreed." She affirmed that "I have no interest in discussing this private meeting any further because Bernie and I have far more in common than our differences on punditry."]

Mark Zuckerberg’s message to the U.S. government: Regulate us, just don’t break us up.

Three months ago, Facebook made the universally-reviled announcement that they would not be fact-checking, censoring, or otherwise banning political ads that deceive or mislead. Now, the biggest social media platform on Earth has doubled down on its tone-deaf policy.

The Campaign to Organize Digital Employees (CODE for short) is a new project of the Communications Workers of America aimed specifically at unionizing video game and tech companies.

A contestant was told she had the wrong answer after identifying Jesus's place of birth, the Church of Nativity in Bethlehem, as being in Palestine.

They police the bounds of American debate, in favor of the sort of Chicago School economic consensus yearned for by the Council on Foreign Relations.

In this new version of a 90s teen drama, five siblings are left on their own when their parents are seized by ICE and deported to Mexico.

The film follows the rebirth and transformation of the former General Motors Assembly plant in Moraine into Chinese-owned Fuyao Glass America.

From themes and formats to storylines, television isn't as straight and narrow as it used to be. Welcome to the messy, vibrant age of queer TV.